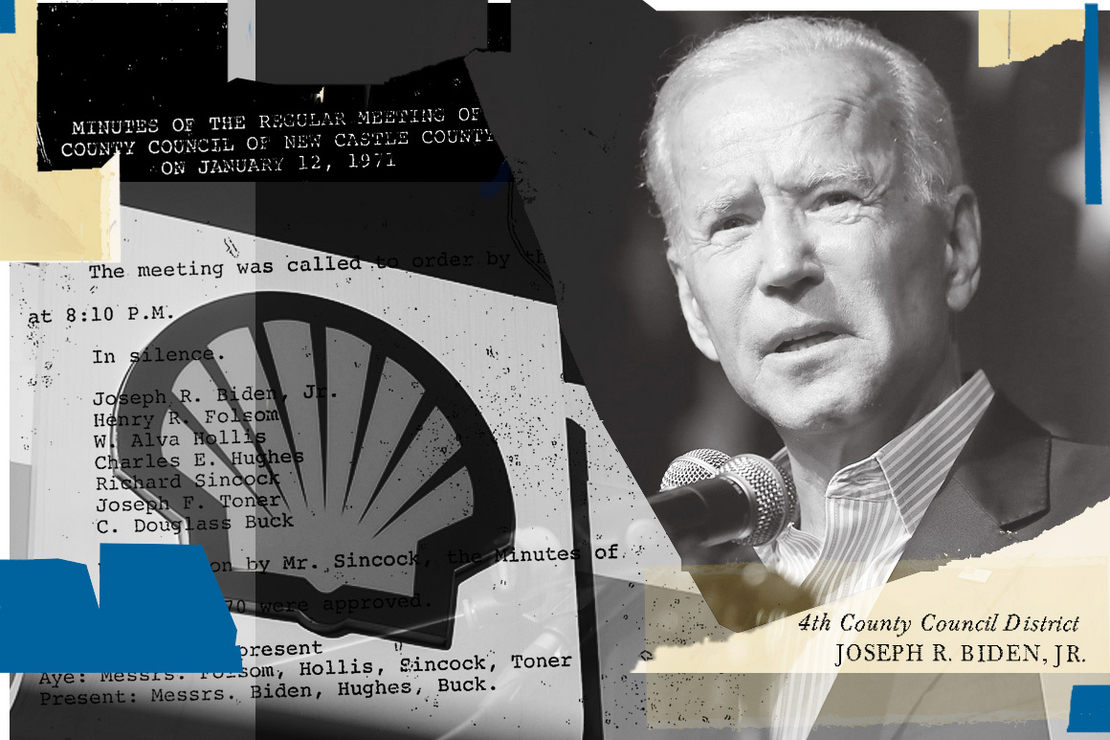 President Joe Biden has been feuding with Big Oil since he was a 28-year-old county councilman in Delaware who went to war against a Shell refinery.

“If Shell wants to build a refinery, let them build it,” Biden said during his brief stint as a local politician, the Wilmington News Journal reported at the time. “But first let them write it in blood that they won’t pollute.” He helped galvanize political opposition to the planned refinery, which was never built.

Biden’s fight against the oil giant was a centerpiece of his two years on the New Castle County Council, where he served from 1971 until 1972. He leaned on his reputation for battling Big Oil to win his 1972 Senate race — catapulting a political career that ultimately landed in the White House.

As president, Biden’s clash with the industry continues, but the stakes are higher. He’s hoping to prod drillers and refiners to step up production in an attempt to ease soaring fuel costs. But his public criticism of industry — and the industry’s disdain for his rhetoric and his policies — could make it harder for the administration and the industry to work together to lower gas prices.

Earlier this month, Biden publicly quipped that an oil executive was “mildly sensitive” after the executive had accused Biden of vilifying the industry. Energy Secretary Jennifer Granholm appeared to make amends on the administration’s behalf, but the relationship between Team Biden and Big Oil isn’t great (Greenwire, June 24).

The fight started decades ago, when Biden was an up-and-coming county councilman with an eye on a U.S. Senate seat.

He won his County Council seat in part by courting middle-class Republicans in the heavily GOP district. “I understood they valued good government and fiscal austerity and, most of all, the environment. I promised them to try to check the developers and fight to keep open space,” he wrote in his 2007 memoir, “Promises to Keep: On Life and Politics.”

Once Biden was sworn in, Shell’s planned refinery became an immediate target.

“Shell Oil had quietly bought fifty-four hundred acres on the water near Delaware City, and they were racing to build a second oil refinery on the coast,” Biden wrote.

Biden introduced a resolution to rezone some of Shell’s industrial acres back to agricultural status, the Wilmington News Journal reported. During a March 1971 meeting, Biden “interrogated the Shell vice president for about 20 minutes, asking for guarantees of pollution-free operation, training programs for local people, and willingness to abide by restrictive pledges in the face of changing times,” according to the paper.

“Let Shell prove to us they won’t ruin our environment,” Biden later wrote in his memoir. “If they can’t prove it, we’ll rezone them right out of here.”

Environmental protection was part of the reason Biden decided to run for office in the first place, he said at an Earth Day speech earlier this year. “It’s been a passion of mine as long as I’ve been involved in public life,” the president said. “I was a young attorney in Delaware, and they wanted — across the top of my state, they wanted to connect two highways, and it’s through what is the most beautiful part of the state.”

Instead of putting the highway in a place that “had no consequence for the environment, they decided to put it through areas that were … straighter … but more damaging,” he said. “And I got involved to try to stop the construction of that highway, which I did. That’s what got me involved.”

As Biden fought with the oil giant from his County Council perch, he was already planning a Senate run, according to Jules Witcover’s 2010 biography, “Joe Biden: A Life of Trial and Redemption.”

John Daniello, a former New Castle County councilman who had courted Biden to replace him on the council, met Biden for lunch after Biden won the seat in 1970, Daniello told Witcover.

Daniello thought Biden wanted to talk about the transition as Biden took over the seat, Daniello recalled to Witcover, “But he says he wanted to run for the Senate!”

Biden — who was still shy of the Senate’s 30-year age requirement — was hoping to unseat Republican J. Caleb Boggs, the two-term sitting senator who had also served as Delaware’s governor and as the state’s lone representative to the U.S. House.

Once Biden launched his 1972 campaign, he appealed to young voters as he sought to frame his opponent as an out-of-touch older politician. And he hoped his environmental record would help him clinch the seat.

“Saving the environment means risking your neck,” said a Biden ad that ran in the Wilmington Morning News in October 1972. He touted the fact that he’d scored the endorsement of Stewart Udall, who led the Interior Department during the Kennedy and Johnson administrations.

Udall “heard about Joe Biden’s stands against Shell Oil, the Highway Department, and any individuals or corporations that threaten Delaware’s environment,” the ad said.

Udall credited Biden with playing a “major role” in stopping the construction of the proposed Shell refinery in southern New Castle County, the Wilmington Evening Journal reported at the time.

Biden wasn’t the only opponent to expanded industrialization along Delaware’s coast at the time. The state’s Republican governor, Russell Peterson, signed the Delaware Coastal Zone Act in June 1971. The law aimed to safeguard the coast from the impacts of heavy industry and preserve the area for recreation and tourism.

Shell cited the law in August 1972 when it declared that its plans to build a refinery in southern New Castle County were dead.

“Shell has been blocked from going ahead with any plans for the construction of a refinery by the enactment of the Delaware Coastal Zone Act,” Shell’s Vice President for Manufacturing John Sheehan said at the time, the Morning News reported. “Consequently, the company is not planning to construct a refinery at that location.”

Biden went on to narrowly eke out a victory against Boggs in November 1972, just two years after his County Council win. He won with just 3,162 votes, launching his 36-year Senate career.

He had turned 30 that November, meaning he was just old enough to be sworn into the Senate the following January.