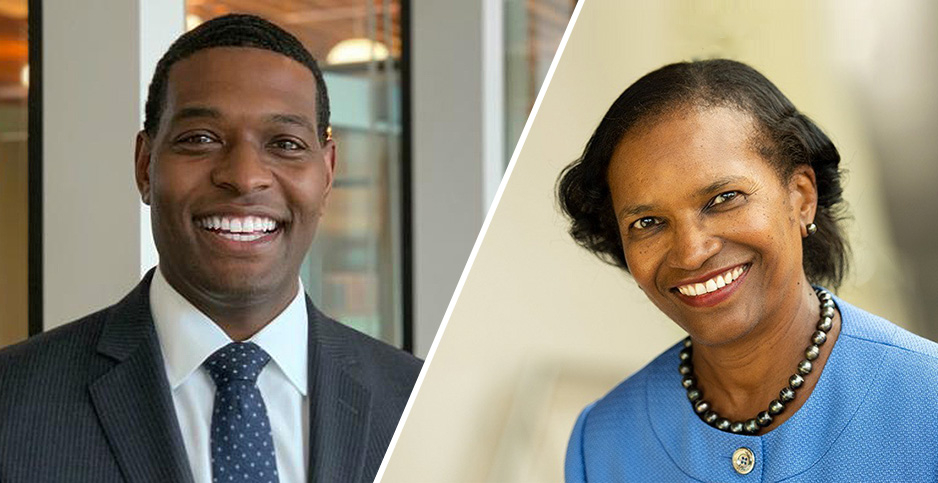 Michael Regan (left) has been chosen to lead the Biden administration's EPA, while Brenda Mallory (right) has been tapped to helm the White House Council on Environmental Quality. President-elect Joe Biden's energy and environment Cabinet nominees are zeroed in on climate action and poised to bring about sweeping policy changes for the pipeline sector. North Carolina Department of Environmental Quality (Regan), Southern Environmental Law Center (Mallory)

President-elect Joe Biden’s Cabinet and climate czar picks are likely to make a dramatic U-turn from the Trump administration’s policies on global warming.

That in turn could have ripple effects for the nation’s pipeline sector, which depends on regulations and permitting from multiple federal agencies.

"This administration is very focused on climate change," said Mark Ryan, a former Clean Water Act attorney for EPA Region 10, which covers the Pacific Northwest. "It’s not likely they’re going to go to bat to help the pipeline industry."

Many of the Cabinet picks for energy positions either have past experience with thorny energy projects or have voiced the need to reverse deregulatory Trump policies.

For example, veteran environmental attorney Brenda Mallory — Biden’s choice to lead the Council on Environmental Quality — has said she plans to prioritize scrapping the Trump administration’s changes to the National Environmental Policy Act. Those changes, applauded by the oil and gas sector, were seen as key to streamlining an intensive permitting process for pipelines, port terminals and other infrastructure.

Another Biden pick, former North Carolina environmental regulator Michael Regan, who was tapped to lead EPA, also is no stranger to high-profile pipeline battles. Under his leadership, the North Carolina Department of Environmental Quality rejected a key water permit for an extension to the contested Mountain Valley pipeline project.

Other agencies like the Federal Energy Regulatory Commission, which is tasked with permitting large-scale natural gas infrastructure and overseeing regulated regional energy markets, could emerge as a key player in ensuring the Biden administration’s focus on climate change is elevated for both infrastructure and electricity generation.

"Our team stands ready to work with the Biden administration and policymakers from both parties in pursuit of an innovative, cleaner energy future that puts the unique advantages of natural gas to good use," INGAA said in a statement yesterday.

Here’s how the incoming administration might change the trajectory of the nation’s pipeline sector:

One way Biden could sway the future of pipelines is through EPA’s final Section 401 Clean Water Act rule, which was finalized by the agency this summer and sets a one-year deadline for states and tribes to certify or reject applications for water permits for projects.

Under the Trump plan, states would only be able to consider water quality — not climate change or air pollution — when making such decisions (Greenwire, June 1). Industry groups and Republicans argued the changes would advance projects stymied by politics, while environmental groups and Democrats cast the rule as a rollback that threatened water sources.

That rule is now subject to multiple legal challenges, and Ryan said it’s likely the incoming administration would step back from ensuring its survival in the courts (Greenwire, Sept. 1).

"I think it’s safe to say they won’t defend it," he said.

But, Ryan added, much will depend on EPA’s assessment of the rule’s legal vulnerabilities, of which he said there are many.

"The nation will be counting on him to protect our environment, stand up for public health and address the inequities suffered by communities overburdened by disproportionate environmental hazard and harm," Bernard said in a statement last week.

Amy Adams, the North Carolina program manager at Appalachian Voices — a group that fought the Atlantic Coast project as well as the Mountain Valley pipeline — pointed to Regan’s comments in August after the DEQ denied a water permit for an extension to Mountain Valley (Energywire, Aug. 12).

"This has always been an unnecessary project that poses unnecessary risks to our environment and given the uncertain future of the MVP Mainline, North Carolinians should not be exposed to the risk of another incomplete pipeline project," Regan wrote in August.

Adams said the United States needs an EPA administrator "who prioritizes and acts on climate change and environmental justice — two of the most pressing issues facing America today."

But Biden’s choice for EPA faces opposition from the Empowerment Alliance, a pro-natural gas group that said in a statement Regan has "repeatedly expressed hostility" to the fuel.

"America should be very concerned that Biden’s energy and environment Cabinet officials will roll back our progress, resulting in higher energy costs for families and small businesses, while ensuring that we have to rely on geopolitical rivals like Russia for reliable energy sources," the group said.

Regan and other Biden picks are also already facing some Republican pushback, including from Sen. Kevin Cramer (R-N.D.), who sits on the Senate Environment and Public Works Committee and whose panel will oversee the nomination process for the EPA pick, as well as Mallory for CEQ.

"When you look at Mr. Regan, the person that’s now been tapped to head up the EPA, this is a person who in North Carolina sued the Trump Waters of the U.S. rule. This is a guy who stopped a natural gas pipeline from delivering that wonderful fuel source to people over water issues, overstepping his legal boundaries," Cramer said (E&E Daily, Dec. 21).

Rob Rains, a senior energy analyst at Washington Analysis, said that although the DEQ’s denial of the water quality certification for MVP Southgate — the 75-mile Mountain Valley extension — is likely to surface during Regan’s confirmation hearing, North Carolina’s state water office made its decision "independent of his judgement and in the spirit of state law."

"The main basis of denial was the uncertainty of the mainline project," Rains said in an email, "and not a determination about the environmental consequences" of the extension.

While Biden will be able to install a Democratic chair at FERC once he’s inaugurated, the commission is likely to retain a Republican majority through next June.

Longtime energy lawyer Allison Clements joined Democratic Commissioner Richard Glick at FERC this month. Clements was confirmed along with Republican Mark Christie, who will be sworn in early next month and return the panel to its full complement of five commissioners. Chairman James Danly and Commissioner Neil Chatterjee are the other two sitting Republicans.

While there’s a chance Danly might step down once Biden appoints either Glick or Clements as chair, many observers expect him to finish out his term, which expires in 2023. Chatterjee’s tenure is slated to conclude next June, making that the earliest time Biden could nominate another Democrat.

Still, Gillian Giannetti, an attorney for the NRDC’s Sustainable FERC Project, says there are actions a Democratic chair can take on pipelines without a Democratic majority to help the administration achieve its climate goals.

"We expect to see early on a newfound dedication at the agency to use the FERC’s robust resources and person power to tackle the problem of climate change and pipelines," she said. "Specifically, to begin focusing on developing a climate test to analyze and consider emissions associated with pipeline projects."

While the commission currently takes into account project emissions, many, including Glick, have argued the panel’s scope is too narrow. And the commission has never rejected an energy infrastructure project on emissions grounds.

Giannetti said there are also actions a Democratic chair can immediately take to address the concerns of landowners in the path of pipelines.

"FERC has been ordered by law to create the Office of Public Participation and has not done so," she said. "If FERC wants to show it’s dedicated to improving the process for landowners, it could take steps to start to create that office."

FERC has come under fire recently for how the panel works with landowners whose property has been seized under eminent domain to clear the way for private pipeline developers (Energywire, Dec. 10).

"If I were an asset owner in the pipeline industry, what I would be watching is what happens with the NEPA review package," Tezak said. "Because if we get NEPA guidance out of CEQ that says you must look at greenhouse gas again, then FERC will have to do that whether the Republican majority is wildly enthusiastic about it or not."

Marc Spitzer, a former Republican commissioner who served from 2006 to 2011, said that kind of policy change may mean FERC ultimately receives fewer applications for pipeline permits.

"If rules governing greenhouse gas emissions are changed at FERC, you may see fewer projects being proposed in the first place," he said. "I, for one, am not sure how you make a soufflé on an electric range, but the Democratic program appears to go in a different direction."

Yet Spitzer said the left is split on what exactly that direction looks like. Democrats may agree that the country needs to reduce emissions, but there are differing opinions about how to get there.

"I know Biden supporters who think hydrogen is the answer. There are others who believe in electrification, and the energy efficiency people argue we should reduce consumption," he said.

Depending on how the Biden administration approaches the problem, he said, FERC may be in the business of converting abandoned natural gas pipelines into hydrogen lines or permitting large-scale transmission lines for renewable resources.

"It does appear that climate is a major focus of the incoming administration, so there will likely be more collaboration among and in between agencies to coordinate activity," he said.

Mallory has said CEQ changes proposed in Trump’s NEPA overhaul exclude certain projects from the review process entirely and that the rule "narrows what the agencies are looking at in a way that obscures what is really happening."

"You almost don’t have a choice but to remove the whole thing," Mallory said this week (Greenwire, Dec. 21).

ClearView analysts in a report this week said they expect the incoming administration will likely suspend the Trump NEPA changes, which went into effect on Sept. 14, and then rescind and rewrite the revisions.

While that process runs its course, ClearView analysts said they expect federal agencies to broaden their statutory reviews and "create even more hurdles [for the Biden administration] than those that began to materialize under the Obama administration."

Yet another area where the Biden administration could have an effect on pipeline permitting involves a program focused on water crossings overseen by the Army Corps of Engineers.

That program has become the target of environmental groups challenging the Keystone XL pipeline. Earlier this year, the U.S. District Court for the District of Montana vacated the oil pipeline’s permit after finding that the Army Corps had failed to assess the cumulative impacts of its Nationwide Permit 12 program on endangered species before reauthorizing the blanket energy project approval in 2017.

Chief Judge Brian Morris later ordered a freeze on the permitting program until the Army Corps completed the interagency review process, although he narrowed his initial order to apply only to new pipeline projects.

The 9th U.S. Circuit Court of Appeals declined to lift that freeze for the crude oil pipeline as it considers the legality of the lower court’s ruling. This summer, the Supreme Court allowed the Army Corps to continue issuing NWP 12 permits for projects except for Keystone XL (Greenwire, July 6).

Ben Cowan, a Houston-based attorney with Locke Lord LLP who represents pipeline companies, said it’s possible a Biden administration could take a step back and do a more programmatic review of NWP 12 to ensure it complies with the Endangered Species Act.

"It could delay the availability of that permit," he said.

According to ClearView analysts, both oil and natural gas pipeline owners expressed concerns to the Army Corps about rushed adoption of changes to the NWP 12 program and the possible creation of more permitting uncertainty and delay.

They also said a decision on Keystone XL’s vacated NWP 12 permit is expected next year, noting that the project’s risk is concentrated in a May promise from Biden to rescind the pipeline’s presidential permit (E&E News PM, May 18).