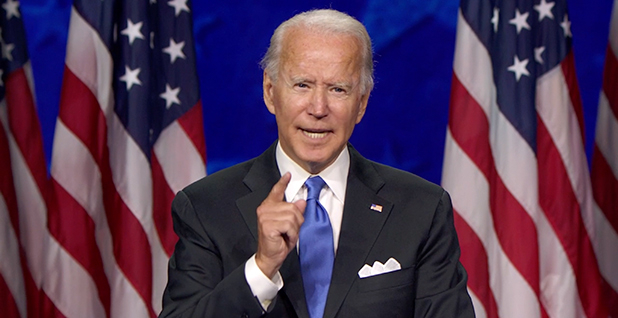 Democratic presidential nominee Joe Biden’s goal of decarbonizing the power sector by 2035 could hinge on an independent agency that’s not part of the presidential Cabinet: the Federal Energy Regulatory Commission.

Biden, speaking to a digital audience last week at the Democratic National Convention, promised to tackle climate change if elected, calling it one of the major crises facing the country.

"It’s not only a crisis, it’s an enormous opportunity," he said. "An opportunity for America to lead the world in clean energy and create millions of new good-paying jobs."

The former vice president has not spelled out fully how he would reach his clean energy goals, but analysts say FERC would play a critical role in a potential Biden administration because of its regulatory authority over the interstate transmission of electricity and ability to approve projects such as gas pipelines and liquefied natural gas export terminals.

"[FERC] is very important, if not critical, for an administration that is looking to set us on a pathway to a net-zero emissions electricity sector by 2035," said Jeff Dennis, managing director and general counsel for Advanced Energy Economy.

The agency, for example, has multiple fossil fuel projects awaiting permits that could be dependent on who is in the White House and has the authority to change power market rules to accommodate and facilitate renewable growth, already a priority for many states. It also sets incentives for developing high-voltage transmission systems, which many see as essential for bringing large amounts of renewable electricity online.

If Biden wins, he would appoint a new FERC chair, who would be charged with setting the agency agenda and therefore determining what is and isn’t voted on.

The only Democrat on the panel now is Richard Glick. But Biden, if elected, could tap current nominee and longtime energy lawyer Allison Clements as the chair, if she is confirmed by the Senate. President Trump nominated Clements to the commission along with Christie. Glick, whose policy preferences have been meticulously documented in his detailed dissents, has seniority, which could make him a more likely candidate.

"Commissioner Glick’s dissents on orders dealing with natural gas pipelines and liquefied natural gas terminals indicate that, if he becomes chairman, natural gas approvals will either halt or be conditioned on mitigating the associated greenhouse gas emissions," said Travis Fisher, who worked on Trump’s FERC transition team and served as adviser to McNamee.

However, even if Biden wins, FERC is unlikely to see a Democratic majority until the departure of Chatterjee, whose term is slated to expire June 2021, although he could step down earlier.

With Glick as chairman and a majority of Republican commissioners, there would still be opportunities to advance a Biden agenda, said Fisher, who now serves as president and CEO of the Electricity Consumers Resource Council.

"The chairman could convene technical conferences or ask staff to develop white papers on important issues such as distributed energy resources, hybrid [generation plus storage] resources, carbon pricing and next steps on capacity markets," he said. "Those actions in 2021 would set the stage for more tangible policy changes in the years to come."

The politically appointed five-member panel draws its power from decades-old laws largely enacted before climate change was a recognized global concern. When FERC was established, lawmakers were most concerned with ensuring the national energy supply remained affordable and reliable. As a consequence, FERC largely received little attention outside the Beltway and is sometimes referred to by observers as "the most important agency you’ve never heard of."

But concerns over climate change have grown exponentially. And as states increasingly work to achieve ambitious low-carbon energy goals and environmental and climate activists battle natural gas infrastructure, observers say the agency could make or break an efficient and reliable energy transition.

"You need a FERC that recognizes that to get to [Biden’s] goal, there are going to be policies put in place by Congress, by EPA and other agencies, as well as by the states, and all these will come together and have an impact on wholesale markets and those markets will have to be adapted accordingly," said Dennis. "You need a commission that understands that and will not view its lane as myopically narrow in that regard."

Christina Simeone, a senior fellow with the Kleinman Center for Energy Policy at the University of Pennsylvania, said one potential way this could manifest is in a carbon tax in wholesale power markets overseen by FERC. She said correcting for market failures is well within FERC’s existing jurisdiction.

"Carbon emissions are an externality. Without some kind of price, that externality is not factored into the market price, and as a result that is a market failure," she said. "Other people will argue with me, but I think that’s a road FERC could go down."

FERC is slated to host a technical conference on carbon pricing this fall, though observers have questioned the viability of implementing such a policy (Energywire, June 18).

The conversation around pricing carbon in wholesale markets has so far centered on whether FERC would accept regional grid operators’ bids to implement that policy. Fisher said that means it would be difficult for FERC to spearhead the move on its own accord.

"I think if FERC acted alone to implement carbon pricing — without clear direction from Congress or the blessing of the states involved — it would face harsh opposition and ultimately lose the ensuing court challenges," he said.

So far, states are conflicted. Last year, 17 states considered over 40 bills pertaining to carbon pricing policies. About half of those measures either failed or were vetoed. The other half are being taken back up in 2020 (Energywire, May 19).

Tyson Slocum, director of the energy program at watchdog group Public Citizen, said the makeup of Congress could determine the extent to which FERC becomes an essential agency in a potential Biden administration.

"If you’ve got comprehensive climate legislation that’s going to address methane regulation over pipelines, emissions from oil and gas production, and cleaning up the electricity sector — as much as I hate to admit it — FERC becomes a lesser agency in terms of its climate impact," he said.

"Will it still have a role? Yes. But … there’s less of an imperative role for FERC to set the agenda or potentially imperil that agenda," Slocum said.

Yet Slocum said it’s "important to assume" climate legislation does not pass given a number of challenges it could face, including a filibuster. "So ensuring you’ve got FERC commissioners [who] are well regarded and respected on these issues is going to be important," he said.

Congressional Democrats have expressed interest in leveraging FERC to achieve zero-carbon energy and protecting front-line communities that bear the brunt of environmental pollution. Earlier this year, the House Select Committee on the Climate Crisis released a sweeping proposal, a chunk of which is dedicated to changes at FERC (Greenwire, June 30).

When that report was released, Miles Farmer, an energy analyst and former policy adviser for New York Gov. Andrew Cuomo (D), said it made clear that if Biden wins, "FERC commissioners are among the most important decisions he will make with regard to what the future of energy looks like in the United States" (Energywire, July 1)

Fisher said that congressional action would be required for what he called "extreme" changes at FERC, such as shifting its focus more to renewables.

He noted that Biden has not endorsed a plan to turn FERC into the "Federal Renewable Energy Commission," a move called for by former presidential candidates Sens. Elizabeth Warren (D-Mass.) and Bernie Sanders (I-Vt.), who did not flesh out what that kind of transition would entail.

"I think it’s important for the sake of regulated entities and for consumers that FERC remain resource-neutral, and I’m optimistic that Biden would not pressure FERC to give up its independence and become an advocate for renewable energy," Fisher said.

"They knew that Pat Wood was someone who shared those goals and had achieved many of those goals in Texas," Dennis said. "He was able to lead FERC in a way that would be in service to the administration’s competition goals, while not straying from the agency’s statutory purposes."

Trump’s choice of Chatterjee, a former aide to Senate Majority Leader Mitch McConnell (R-Ky.), sparked arguments about whether the move may have politicized the agency, which is known for its technical savvy.

"The Trump administration put FERC on a much more political path than it has in the past," said Simeone of the Kleinman Center. For example, the commission introduced a market rule change last year that critics say disadvantages renewable energy development (Energywire, May 13).

"The question would be does a Biden administration return FERC to a less political position, or does it take its cues from the Trump administration and put more aggressively political candidates in leadership?" Simeone said.

Gillian Giannetti, an attorney for the Sustainable FERC Project, declined to speak about political implications but said in general the world around FERC may have changed more than the panel itself.

"When I was a teenager first becoming interested in policy and how our government makes decisions, it was next to impossible to find anyone who was interested in talking about energy," she said.

Former FERC Commissioner Colette Honorable, who served on FERC from 2015 to 2017 after being appointed by President Obama, said that although appointments are by party affiliation, FERC is nonpartisan in its work. She said commissioners should be selected based on their experience and integrity, as opposed to their willingness to achieve political ends.

"It’s critical that commissioners are fair and operate with integrity, because otherwise it undermines the agency and its credibility," she said. "Independence is key."

Both Democratic and Republican commissions have worked to better integrate low-carbon energy, she said. As an example, she pointed to Order No. 841 to reduce barriers for energy storage resources to access federal wholesale electricity markets (Energywire, July 14).

"We’ve seen even this iteration of FERC continue that work," she said, referring to the Republican majority panel. "That’s an important example because it crosses two different administrations."

Chatterjee said he likewise expects his agenda to carry into the next administration regardless of party affiliation. Because FERC is an independent agency with a bipartisan structure, it is mostly insulated from changes in administrations, he said on a recent webinar with the Ontario Energy Association.

"As regulators it’s important to provide stability. For the regulated community — consumers, investors — having rapid pendulum swings back and forth is very disruptive," he said. "The direction of the commission may slightly change, but I don’t expect it to be a dramatic shift."

While Honorable said she tries not to be a "Monday morning quarterback kind of commissioner," one area she would like to see change is in the panel’s diversity.

"We have only had three African Americans who have served at FERC, and I was the last one," she said. "I’m hopeful we will have a fourth. It’s important the people who serve the public look like the people they serve."