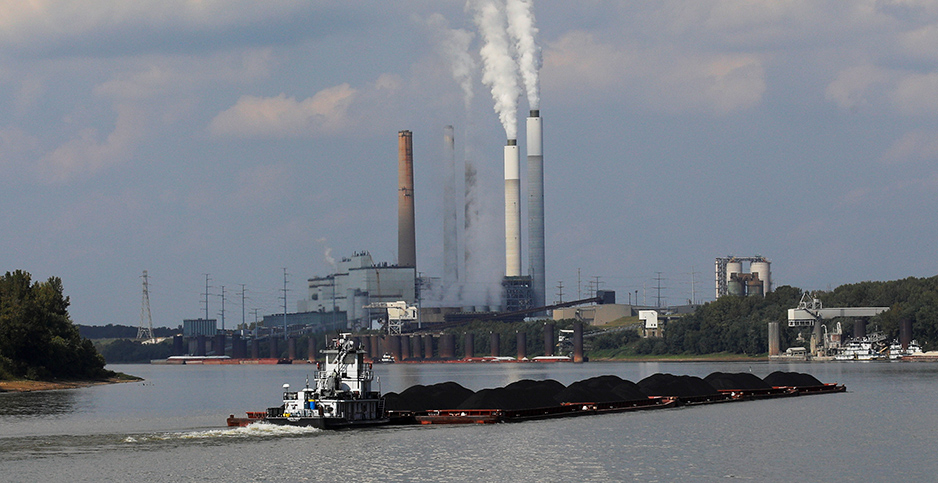 Coal barges are pushed toward the Mill Creek Station power plant in Louisville, Ky. President Biden's plan to cut emissions in half by 2030 would end the American coal era. Brian Snyder/REUTERS/Newscom

Coal will need to disappear, electrification of cars and buildings must rapidly accelerate, and oil consumption has to wane if the United States hopes to cut its emissions in half over the next decade, experts say.

That outline comes as President Biden sets the nation on a path to slash emissions 50-52% by 2030 to avert the worst effects of climate change. The magnitude of those actions is unprecedented in U.S. history and stands to reverberate through the power sector, transportation systems and industrial businesses.

A glimpse into the challenge of meeting those deep carbon reductions was offered by the pandemic over the last year. Life-altering responses to the disease, such as nationwide lockdowns, drove emissions down 10% in 2020.

Compared to carbon levels in 2005, the year Biden is using as a baseline, that amounted to a 21% reduction, according to an analysis by the Rhodium Group.

"We are talking about a fairly fundamental change in the U.S. and global economy if we’re going to address the climate change problem," said Kevin Kennedy, a senior fellow at the World Resources Institute.

U.S. emissions inched downward by about 1% annually over the last 15 years. Now they’re moving in the other direction. Emissions rose 3% through the first two months of 2021 compared with the same time last year, according to Carbon Monitor.

Still, a 50% reduction is possible by 2030, say experts, who point to the clean technologies available today. They vary from wind and solar in the power sector to heat pumps in buildings to electric vehicles for transportation.

There are multiple pathways to halving emissions over the next decade. Many experts likened the options available to a dial. Turn emission reductions from one sector up, like accelerated EV adoptions, and the emission burdens faced by other sectors are less. The country’s ultimate path will depend greatly on technological advancements and policymakers’ willingness to wade into the transition.

Most decarbonization studies envision deep emissions reductions from power plants over the next 10 years while priming cars, buildings and factories for deeper reductions after 2030.

"There are many low-cost opportunities in power," said Nathan Hultman, who served on the Council of Environmental Quality in the Obama administration and now leads the Center for Global Sustainability at the University of Maryland. "You basically have a number of aging plants that are particularly dirty, old coal-fired power plants.

"Even if we didn’t care about carbon emissions or air emissions, which we do, those plants are getting older," he continued. "At the same time, we have all these clean technologies that are equal or really cheaper than building fossil. The natural turnover of that part of our economy makes it an easy choice."

There’s agreement among the studies on one thing: Coal will have to disappear if Biden hopes to meet his 2030 goal.

Coal generation declines dramatically in all five net-zero pathways charted by researchers at Princeton University. That mirrors modeling results from the University of Maryland and others.

The fuel remains a significant source of U.S. emissions despite a substantial decrease in coal generation over the last decade. Coal-fired power plants emitted 870 million tons of CO2 in 2020, according to EPA data, or roughly 19% of total U.S. emissions.

"If we’re talking about transformative change in our energy system, it does not just require the techno-economic shift we’re talking about. This is about deep societal shifts," said Rachel Cleetus, policy director for the Union of Concerned Scientists.

"If coal is going to exit the system by 2030, as most research shows it must, we must invest now in a fair transition for coal-mining communities, which are already being badly affected by the ongoing transition from coal," she added.

Other sectors also face major changes. Most studies predict an uptick in electric vehicle adoption, even in scenarios where electrification efforts are slow to take hold.

Princeton found that between 6% and 17% of light-duty vehicles would be electric by 2030. That would lead to less oil consumption across the country, according to Princeton’s five net-zero pathways. Declining oil use over the next decade was relatively modest when compared to the disappearance of coal.

Similarly, the University of Maryland analysis found that a 50% reduction in overall U.S. emissions would require new appliance standards to drive widespread building electrification, with homeowners and landlords swapping out fossil fuel-fired furnaces and cookstoves for electricity. Nearly 60% of buildings would be fully electrified by 2030, Maryland’s analysis found.

Both studies speak to challenges that go beyond the power sector. There are a relatively small number of power plants in the U.S., but cars, buildings and appliances number in the hundreds of millions. People tend to hold onto vehicles, furnaces and stoves for at least a decade, if not longer.

"There are many ways to get to the target, but by hook or crook we need to get there," he said. "It is too early to reject any technology options because we don’t know what the winners are going to be."