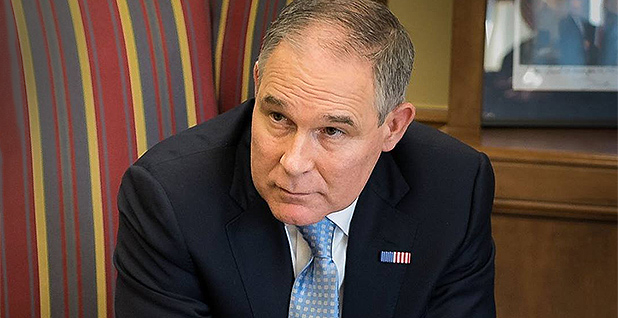 Costs for U.S. EPA Administrator Scott Pruitt’s personal security detail during his first months in office have been close to double those for his predecessors during the Obama administration.

Documents obtained by E&E News under the Freedom of Information Act show EPA has spent substantially more on Pruitt’s security detail during roughly his first three months as EPA chief than past administrators Lisa Jackson and Gina McCarthy during comparable time periods.

Compensation for Pruitt’s security detail during his early months in office was $617,566.71, according to records. In addition, travel costs for the detail were $215,168.69 during that time period.

Overall, EPA spent $832,735.40 on Pruitt’s protection detail for about his first quarter running the agency — nearly double what was spent on security for Jackson and McCarthy.

Jackson’s personal security ran up payroll and travel expenses of $423,490.62 during her early months running EPA in 2009.

McCarthy’s protective detail had compensation and trip costs of $465,165.04 for her first months in charge of EPA in 2013.

Amy Graham, an EPA spokeswoman, said decisions about Pruitt’s security are made by his detail.

Pruitt’s security costs spiked higher than his predecessors’ after EPA looked to increase his protective detail. Internal budget documents and emails show the agency has asked for around-the-clock security for Pruitt, which is a significant uptick in protection for an EPA administrator.

In an internal email sent shortly before Pruitt’s Senate confirmation in February, the administrator had requested tighter security. Henry Barnet, director of EPA’s Office of Criminal Enforcement, Forensics and Training (OCEFT), said in the email, "Based on conversations with the transition team, we anticipate that Mr. Pruitt will initially request a 24/7 detail" (Greenwire, Feb. 20).

Another agency budget memo showed EPA had set aside $800,000 in carryover funds from fiscal 2017 to help pay for travel by Pruitt’s protective detail.

EPA’s increased security spending for the administrator comes amid proposed deep budget cuts by President Trump for the agency, including for its enforcement office. Under Trump’s fiscal 2018 plan, funding for EPA’s Office of Enforcement and Compliance Assurance would see an almost 24 percent cut, reducing it to $419 million.

EPA’s Protective Service Detail guards the administrator and is part of the larger OCEFT at the agency. The detail can call upon special agents from elsewhere in EPA’s enforcement office when needed to protect the agency’s top official.

It’s not clear how many agents are protecting Pruitt.

In response to E&E News’ FOIA requests, information indicating the number of agents protecting Pruitt — and, before him, Jackson and McCarthy — was redacted. EPA blacked out the information in the records in order to not disclose investigators’ techniques and procedures as well as law enforcement information that, if shared, could endanger lives.

"When you go to 24/7, you don’t have the agents in Washington to do that. So then you start having to pull agents from the 10 regions around the country to backfill that."

"These guys are responsible for complex, criminal environmental cases to protect human health, and they are now doing baby-sitting duties. That’s not what they signed up for," Hubbard said.

"They pick them up from their home and drive them to work, be on duty at the office for local travel during the day, and then that shift would end," said David McLeod, who was EPA special agent in charge of the agency’s Region 3 branch in Philadelphia.

"Now, I’m not sure how many shifts they’re running. It could be three or four. When they were doing ‘portal-to-portal,’ it was two shifts," McLeod said.

Heightened protection could lead to greater costs at EPA, including paying for overtime as well as travel and lodging to maintain the security detail during the administrator’s trips.

The FBI investigated a death threat directed at Russell Train, EPA’s second chief, who led the agency from 1973 to 1977. Records obtained by E&E News under FOIA showed the bureau probed material mailed to Train, including a certificate titled "Bullets for Bureaucrats," which led to increased security around the administrator’s office (Greenwire, Jan. 30, 2015).

It’s not known whether Pruitt is receiving similar threats, but he has become a high-profile and controversial member of Trump’s Cabinet.

"If there is threat intelligence, that justifies increased protection," McLeod said. "It’s a valid mission. You got to do it."

Other observers have made similar points about boosted protection for the administrator, including the Environmental Integrity Project. The green group filed a complaint with EPA’s Office of Inspector General asking whether increased security spending for Pruitt was "a wasteful use of taxpayer funds" (E&E News PM, May 11).

Burnside, the former head of EPA’s criminal enforcement office, said he wants to know why EPA feels it needs to provide around-the-clock protection for the agency chief.