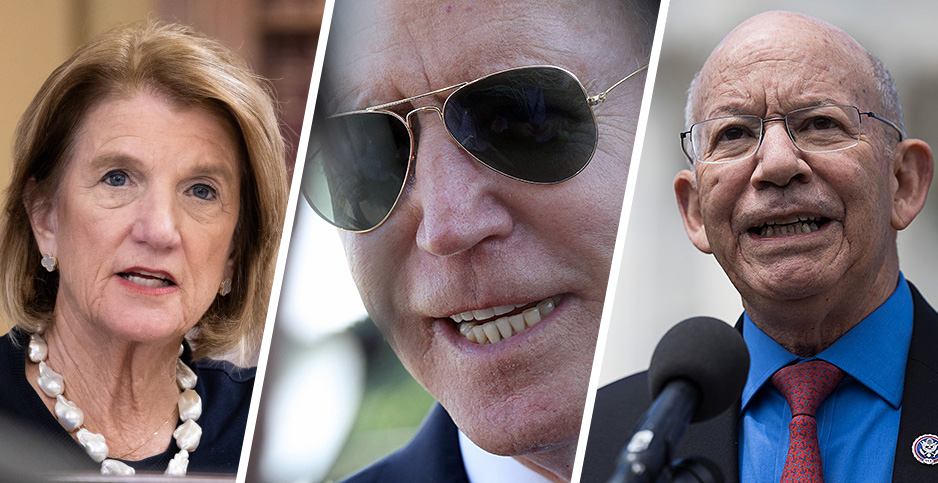 Despite a continued lack of agreement on major details for a once-in-a-generation infrastructure bill, talks between President Biden and Sen. Shelley Moore Capito of West Virginia will continue today.

The clock is ticking for Biden, and by extension the Democrats who control Congress, to decide whether negotiations with Republicans are worth continuing or if the time has finally come to instead pursue a partisan package.

Commerce Secretary Gina Raimondo offered reassurances yesterday that the upcoming conversation between the president and Capito, the top Republican on the Senate Environment and Public Works Committee, isn’t a "do or die" moment and that discussions could go on in the days ahead.

Raimondo, who appeared on ABC’s "This Week with George Stephanopoulos," called this a "big week" for infrastructure, with the House Transportation and Infrastructure Committee poised to mark up a $547 billion surface transportation bill (Greenwire, June 4). Consideration of this measure isn’t likely to garner much, if any, Republican support.

The House effort stands in contrast to the Senate, where in late May the Environment and Public Works Committee advanced a $350 billion surface transportation bill with unanimous support (Greenwire, May 26).

Democrats and Republicans who hope for a bipartisan agreement down the line have, nevertheless, pointed to this legislative movement to prove that drawn-out negotiations with the administration are not slowing down progress.

Still, Senate Democrats have said they want to consider an infrastructure bill on the floor in July. This leaves little time to address the logistics of preparing a package to be voted on through reconciliation — a partisan maneuver allowing a bill to pass by simple majority, thus bypassing the 60 votes needed to overcome a filibuster — if the majority decides that’s the only path forward to get something done.

Raimondo, Transportation Secretary Pete Buttigieg and Energy Secretary Jennifer Granholm were all dispatched to appear on the news shows yesterday morning to bring a shade of optimism to the high-level talks.

"It’s been a month of great progress, and we have to stick with it a bit longer to see what’s possible," Raimondo said.

"Every conversation I’ve been part of there has been a lot of goodwill," Buttigieg said on "Face the Nation" on CBS. "It’s been honest. It’s been aboveboard. We have big disagreements, that’s for sure. But we’re very candid about them."

Granholm, in an interview with CNN’s "State of the Union," was the only one of the three to express some doubts and betray some level of exhaustion.

"This has got to be done soon," she said. "It is frustrating that there’s not more coming together on this."

She also appeared to suggest Republicans were being disingenuous, having pushed for policy proposals in their own bills in the past but not including them now in their counteroffers to the president.

‘We think we can find a way’

Granholm went on the Sunday news show circuit fresh from a trip to West Virginia with the state’s Democratic senator and the Senate’s most consequential swing vote, Energy and Natural Resources Committee Chairman Joe Manchin.

When it comes to infrastructure, Manchin has said he doesn’t want to vote on a package that isn’t bipartisan, signaling he wouldn’t support using reconciliation to accomplish the task.

It’s not clear whether Manchin will at some point soften on this stance: In a 50-50 Senate, Democrats won’t be able to pass any party-line priority vote without Manchin.

"You’ll have to ask him where his ultimate bottom line is," said Granholm in the "State of the Union" interview yesterday, underscoring that Manchin supported objectives that an infrastructure package would achieve, like reclaiming abandoned coal mines and oil and gas wells and removing carbon emissions from fossil fuel production.

Manchin, in a separate interview on "Fox News Sunday," told host Chris Wallace, "I still have all the confidence in the world" that a bipartisan agreement can be reached.

"My goodness," he continued, "the president has gone from $2.25 trillion down to $1 trillion. The Republicans have come up quite a bit from where they started. … We’ll wait. We think we can find a way there. We’re not that far apart."

In reality, after nearly two months of talks, the two sides appear to have made little meaningful progress in reaching an agreement on the scope of an infrastructure package, the overall spending level and how to pay for the plan.

A twin proposal would spend trillions of dollars more for child care and other "social infrastructure" that Republicans have derided as falling outside the scope of what is traditionally considered "infrastructure."

The White House wants to pay for the jobs plan by hiking corporate tax rates to 28% over 15 years — a nonstarter for Republicans, who have countered with a proposal to repurpose hundreds of billions of dollars of COVID-19 relief funding and create new user fees on electric vehicles to foot the bill.

This proposal is unacceptable to Democrats. The administration argues that the bulk of the COVID-19 relief funds are already obligated. In addition, instituting user fees would violate a Biden campaign pledge not to raise taxes on individuals making less than $400,000 a year.

countered Biden’s offer with one pegged at $568 billion. But late last month they brought the price tag up to
$928 billion, which included $48 billion more for water projects and $4 billion for EV-charging infrastructure.

Republicans said this $928 billion counteroffer, which came after Biden reduced his own ask to $1.7 trillion, was in response to the president’s pledge to them during a private Oval Office meeting that he would back a $1 trillion bipartisan package.

But during a recent one-on-one meeting with Capito, Biden reportedly explained the $1 trillion must be in new spending, rather than on top of what would be spent ordinarily. When so-called baseline spending is factored in, the $928 billion offered by Republicans amounts to about $257 billion in new spending.

Biden also spoke to House Transportation and Infrastructure Chairman Peter DeFazio (D-Ore.) this past Friday in advance of the panel’s markup scheduled for Wednesday, with Psaki reporting that the two men "agreed on the benefits of continued engagement with Democratic and Republican senators as the House work on infrastructure advances this coming week."

The bill would authorize $343 billion over five years to fortify existing roads and bridges and accelerate zero-emissions transportation and infrastructure, as well as $109 billion to increase routes and reduce maintenance backlog, and an additional $95 billion for passenger and freight rail.

House Republicans, who introduced a competing, $400 billion measure last month, slammed the package for what they said was a doubling down on restrictive policies and costly diversions. Transportation and Infrastructure Committee ranking member Sam Graves (R-Mo.) dubbed the Democratic bill "My Way or the Highway Bill 2.0."

During a press conference at the end of last week, DeFazio acknowledged his GOP colleagues’ objections — namely their efforts to hit the brakes on the bill’s climate provisions — but said he plans to move ahead with his measure unchanged.

"We’re upending decades of status quo," he said. "We want to make America again a leader in the world in terms of infrastructure."

The committee is also scheduled to take up a water infrastructure bill that has likewise triggered pushback among Republicans who have introduced rival legislation.

The bill — which has the backing of environmental groups, union members and the U.S. Chamber of Commerce — would authorize $50 billion over five years for wastewater projects and local water quality challenges, as well as $40 billion for the Clean Water State Revolving Fund and an additional $1 billion for communities struggling with "forever chemicals" contamination.

On the other side of the aisle, House Republicans — led by Graves and Reps. David Rouzer of North Carolina and Don Young of Alaska — are pushing H.R. 3218, the "Wastewater Infrastructure Improvement Act of 2021," which would authorize $14 billion for the Clean Water State Revolving Fund to be spent over five years. It also includes a number of provisions that Democrats jettisoned earlier in the year.

GOP members of the Transportation and Infrastructure Committee complain that this week’s markup of the bill flies in the face of last year’s cooperative efforts on related items, plus goes beyond the allocations included for the Clean Water State Revolving Fund in the $35 billion water infrastructure bill that passed the Senate back in April (E&E News PM, April 29).

Justin Harclerode, the spokesman for Republicans on the Transportation and Infrastructure Committee, said the Democratic-led water bill was "really in another realm of reality compared to where House Republicans, Senate Democrats and Senate Republicans all are."

The House markup is Wednesday. The Senate Banking, Housing and Urban Affairs Committee will hold a hearing tomorrow on rural transit issues.

Schedule: The Senate Banking hearing is Tuesday, June 8, at 2:15 p.m. via webcast.

Schedule: The House Transportation and Infrastructure markup is Wednesday, June 9, at 10 a.m. in 2167 Rayburn and via webcast.