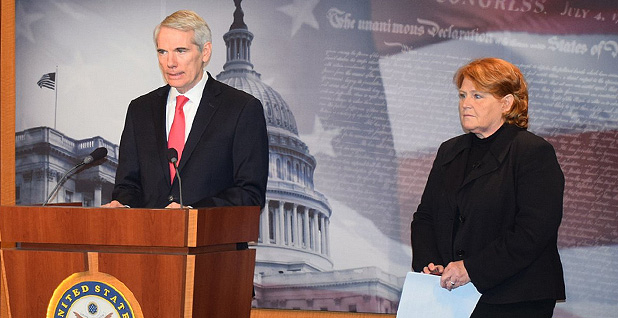 The proposal would also trigger an automatic review process for major regulations, allow hearings on the most significant federal actions and require agencies to inform the public earlier before they plan to begin working on a new rule.

"Back in the ’80s, when I graduated from law school, you couldn’t eat fish out of the Great Lakes, it was too dangerous. A decade before, you had rivers lighting on fire, you had spontaneous explosions in landfills in New Jersey," Heitkamp said at a press briefing this morning.

"No one wants to go back to those conditions."

Heitkamp said the measure would not reverse or prevent environmental and public health protections, but rather give the public greater input from the outset, before a rule is promulgated.

Clean Water Act jurisdiction guidelines have been subject to decades of litigation. Heitkamp said, "Additional engagement may take more time on the front end, but you’ll get a rule that can survive judicial scrutiny."

Heitkamp also said the latest version of the bill, which Portman first introduced in 2010, is substantially different from House language, H.R. 5, that passed early this year.

While both versions would require agencies to find the least costly alternative for rules, the Senate bill includes a "savings clause" to avoid overriding existing cost-benefit stipulations.

For example, U.S. EPA is charged with setting standards for ozone and other pollutants every five years under the Clean Air Act. In 2001, the Supreme Court barred the agency from considering compliance costs in setting ambient air standards in Whitman v. American Trucking Associations Inc. Under the "savings clause" provision, the Senate "Regulatory Accountability Act" would not override that ban.

The second major difference is that the Senate bill, Heitkamp said, would require an automatic review of major rules within 10 years of issuance. "It would guarantee for major rules there would be an ongoing process for review," she said.

Portman noted that every president since Reagan, including Clinton and Obama, has required agencies to conduct cost-benefit analyses when issuing new regulations.

Environmentalists and some public interest groups, however, oppose the codification on the process. Yogin Kothari, Washington representative for the Union of Concerned Scientists’ Center for Science and Democracy, said putting the practice into law would make it harder to finalize public health and environmental protections.

"It simply provides another opportunity for regulated industries to challenge and undermine science-based safeguards intended to protect Americans," he said in an email.

"Ultimately, these kinds of requirements will build upon President Trump’s agenda to deregulate and gut public health and consumer protections."

The legislation could also slow the deregulatory process President Trump has promised. Portman said it’s not about aiding one party’s agenda. "It’s what is the best policy," he said. "It makes so much darn sense."

Business groups, like the U.S. Chamber of Commerce, are praising the measure as a common-sense way to unburden small businesses and expand the economy.

"The Regulatory Accountability Act would increase scrutiny of the most expensive rules that cut across industries and sectors, requiring greater transparency and agency accountability," Neil Bradley, the group’s senior vice president and chief policy officer, said in a statement.

"We encourage all Senators to support this bipartisan reform legislation that can encourage business expansion, spur job creation, and ultimately help grow the American economy."

Scott Slesinger, legislative director of the Natural Resources Defense Council, said the measure would "tilt the scales" in the direction of polluters.

"It would make it virtually impossible to safeguard the public from dirty air, unsafe drinking water and other health threats," he said in a statement.

The American Forest & Paper Association and the American Wood Council are supporting the bill, while the BlueGreen Alliance, the Union for Concerned Scientists and other public health groups are opposing it.

Heitkamp said she doesn’t know yet whether enough Democrats can support the package because they haven’t had a chance to look at the measure in its current form.

"It’s not like everybody has had a chance to see it," she said. "Usually, people have new ideas they’ll bring to the table. It may require some amendments."

Heitkamp said she and Portman are open to listening to new ideas about ways to improve the bill. The two agreed, however, that the "time has come" to update the rulemaking process.