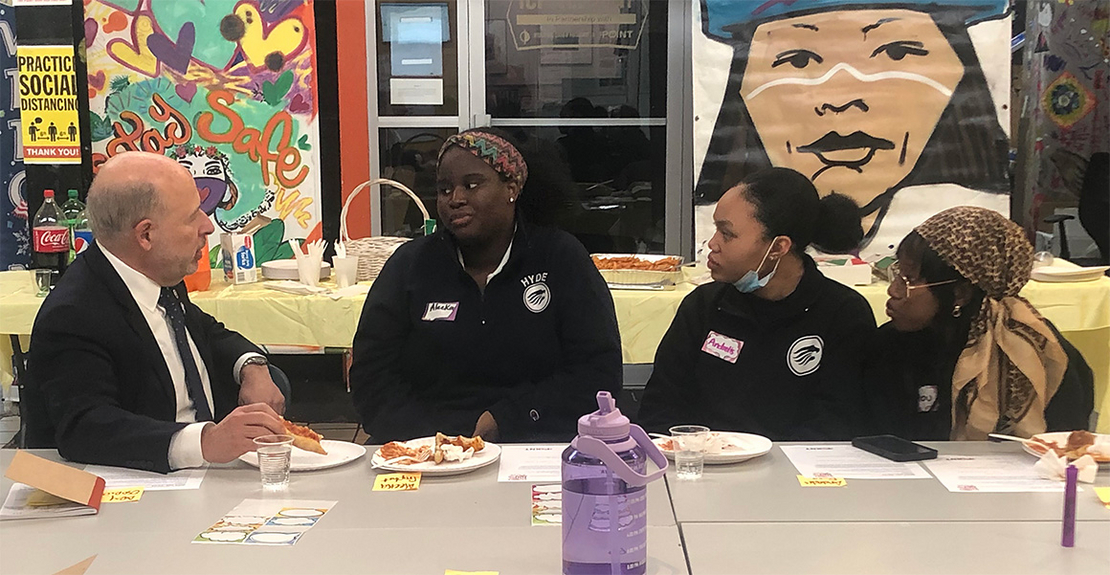 NOAA Administrator Rick Spinrad (left) meeting with Aleeka Prophet (second from left) and two other students at a “pizza mixer” to talk about climate change at the Point Community Development Corp., a small nonprofit in the Hunts Point neighborhood of the South Bronx. Rob Hotakainen/E&E News

Long assailed for its poor record in minority hiring, NOAA in the past 20 months added 82 Black scientists to its workforce, increasing their number by nearly a third.

They’re among the almost 1,100 new scientists whom NOAA has hired since March of last year.

Overall, the number of Black scientists rose from 247 in March of 2021 to 329 as of this month, according to new data compiled by the agency. That figure includes 96 Black female scientists, an increase of 11 people from 2021.

But Black scientists are still just a small portion of NOAA’s expert staff. They now account for 4.25 percent of the scientific workforce, compared to 3.7 percent last year, according to NOAA’s data. These professionals work in a wide range of positions, including hydrology, meteorology, oceanography, fishery biology and general engineering.

The improvement over the last year comes after a report by the House Science, Space and Technology Committee found that NOAA had one of the weakest diversity records among federal agencies in science, technology, engineering and math (STEM) fields (Greenwire, April 12, 2021).

Some of the toughest criticism of NOAA’s hiring record has come directly from Spinrad.

Even before he was confirmed last year, Spinrad, who’s 68 and white, criticized NOAA for being “woefully nondiverse.” When he testified before a congressional panel later in the year, he called it one of the biggest issues facing the agency, saying “too much of NOAA’s workforce looks like me” (E&E Daily, Sept. 24, 2021).

Spinrad pleaded for help at a meeting with leaders of the Columbia Climate School in New York in March, telling them NOAA needs more help from academic institutions in producing top-level scientists of color and that the agency’s very survival hangs in the balance.

“NOAA will not be able to exist if we don’t change the way we are,” he said.

With the addition of 1,082 new scientists, the overall number of scientists at the agency has now grown by more than 16 percent since March of last year, rising from 6,654 to 7,736.

NOAA said it could not offer a salary range for the new hires but described the positions as “generally well-paying jobs.”

It’s unclear exactly how NOAA is paying for all the new employees, but Congress has sent the agency plenty of extra money during the first two years of the Biden administration, both in annual appropriations and programs involving one-time funding. The bipartisan infrastructure law, for example, provided NOAA with an additional $3 billion to battle climate change, protect fisheries and improve weather forecasting.

Last year’s report on “scientific brain drain” by the House science panel found that NOAA employed six white STEM employees for every STEM employee from a minority group, with the situation “most acute” with Black staffers.

“NOAA oversaw the largest racial and ethnic disparities in terms of overall and STEM workforces of the seven observed agencies,” which included EPA, the Department of Energy and NASA, the report said.

Rep. Raúl Grijalva (D-Ariz.), the chair of the House Natural Resources Committee, organized a forum on the issue last year, saying that Black Americans were “inadequately represented” in the sciences and that lawmakers and the Biden administration needed to do more to promote diversity in federal agencies and “draw upon the rich talent and diversity that exists.”

This month, Spinrad acknowledged that NOAA leaders “still have more work to do,” noting that the agency has created more educational partnerships and internships with hopes of attracting more minority employees.

“NOAA is a great place to work and ensuring our workforce reflects the face of our nation is a top priority,” he said in a statement to E&E News.

‘No one really talks about being a scientist’

Jahnelle Howe, 25, hopes to do just that, as soon as she gets her doctorate degree at the City College of New York.

She left little doubt when she got a chance to pitch both her graduate school project and her career ambitions to Spinrad when he made a stop at the college during a recruiting trip to New York earlier this year.

“That’s definitely the goal and the hope,” said Howe, who’s studying the effects of carbon stocks on mangroves in Puerto Rico.

“Excellent,” replied Spinrad, after he quizzed Howe, asking her to identify the biggest risk involved in her research project.

Howe, who grew up in the Bronx after immigrating from the Caribbean at the age of 8, said she’d love to do coastal research at NOAA’s National Ocean Service.

But she said too many young Black students do not regard such jobs as a career option and that the federal government should do more to get young people involved in both the sciences and math fields.

“You know that you can be a doctor or you can be a lawyer, but no one really talks about being a scientist or a mathematician — it’s not something that’s really discussed,” said Howe.

Her advice for federal recruiters: Go to the “lesser neighborhoods,” where many bright kids are eager to get a chance.

“They can’t be afraid to go into those neighborhoods, you know what I mean?” said Howe. “A lot of kids are smart, they just don’t have the opportunity.”

‘There’s nothing more important than showing up’

Earlier in the day, Spinrad had attended a “pizza mixer” in the Bronx, meeting with high school students interested in climate change at an event hosted by the Point Community Development Corp., a small nonprofit in the low-income Hunts Point neighborhood.

A sign on the yellow wall told participants what to do when they entered: Introduce yourself to a stranger and explain your personal interest in climate work.

At a long table in a brightly lit auditorium, Spinrad pulled up a chair next to 18-year-old Aleeka Prophet, who told the crowd about her school project that examined the link between high rates of asthma in her neighborhood and the pollution from nearby factories and roaring trucks.

When Prophet told Spinrad that she planned to study business in college, he advised her to keep an eye on climate change, too, perhaps finding a way to combine her passion for both fields.

Spinrad’s visit in late March impressed the local congressman, Democratic Rep. Ritchie Torres, who got to see the NOAA administrator mingling with his constituents and students from his district, one of the poorest in the nation.

“It sends a powerful message that his agency sees communities like mine,” Torres said. “There’s nothing more important than showing up and meeting not only with civic leaders but students from the district and telling them that we see a place in our agency for young talent from the South Bronx. That’s a powerful message to deliver.”

Torres said front-line communities of color such as the South Bronx have been among the hardest hit by climate change and that they deserve “a seat at the table” with NOAA in developing a national response.

“For me, diversity is not simply about politics or public relations, it’s a moral imperative,” he said. “And a wise person once said if you don’t have a seat at the table, then you’re probably on the menu.”

Prophet, who began her freshman year at Cornell University this fall, seemed to appreciate the attention from Spinrad.

“I love that he came to me first and started the conversation — I’m very shy,” she said later. “I don’t really like to talk to a lot of people, but he seemed so warm and like welcoming. We just connected.”

When they parted ways after lunch, Spinrad reached into his pocket and gave Prophet his business card, along with more advice: “Call anytime.”