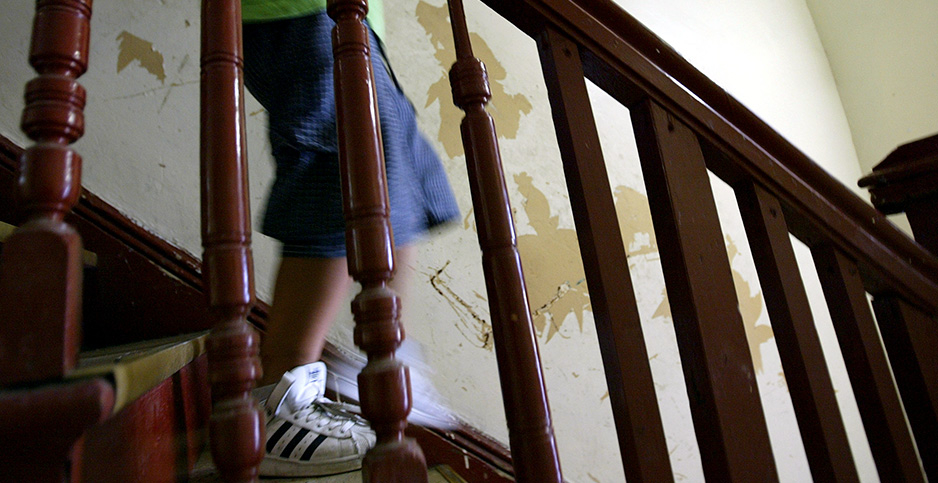 Children who have high levels of lead in their blood walk past a peeling lead paint wall in their apartment in New York City. Spencer Platt/Getty Images

President Biden’s proposal to get the lead out of the nation’s pipes has some experts wondering: What about the paint?

Banned decades ago for its neurotoxic effects, lead can inhibit brain development in children and cause behavioral issues. Overall, lead exposure to kids has been estimated to cost society $50 billion in lost wages annually. But lead persists in pipes and paint across the country, particularly in older and low-income housing stock whose residents can’t afford to update their homes.

Lead contamination in drinking water has received national attention since tap water in Flint, Mich., tested for extremely high levels of the neurotoxin. As a result, President Biden and House lawmakers have pledged to spend $45 billion on removing every remaining lead pipe in the nation.

Much less attention — both in the news and in legislation — has been paid to lead paint, even though it is the biggest source of exposure for children between 1 and 6 years old. Those young kids will often accidentally ingest paint chips or dust while crawling or sucking on their hands and toys.

Lead paint is also more common than lead pipes. EPA estimates there are between 6 million and 10 million lead pipes nationwide, while about 24 million housing units have significant lead-based paint hazards, according to the Centers for Disease Control and Prevention.

But Biden’s American Jobs Plan doesn’t propose any specific pot of money dedicated to lead paint removal. Rather, such remediation efforts would be rolled into the proposed $40 billion to improve infrastructure of public housing, which, in addition to mitigating "imminent hazards to residents" like lead, would also go toward energy efficiency measures and other improvements.

"This is the predominant source of poison, and yet it feels like it was somehow missed," said Ruth Ann Norton, president and CEO of the Green & Healthy Homes Initiative. "It is a big blind spot."

Norton says the plan needs to "articulate dedicated investments" in lead paint remediation. Her group sent a letter to Housing and Urban Development Secretary Marcia Fudge last month asking for a $45 billion carve-out — an amount that could create more than 3.7 million lead-safe homes.

"You could not have a clearer example of an opportunity to change the trajectory of racial equity than by improving the health of housing, because when you do, kids who are not brain damaged by lead will get into classes healthy, ready to learn and ready to compete for a lifetime," Norton said. "But you have to do lead-based paint. There’s just no way around it."

Her request mirrors a set-aside in the "Environmental Justice Legacy Pollution Cleanup Act of 2021" that Sen. Cory Booker (D-N.J.) and Rep. Donald McEachin (D-Va.) plan to introduce in the coming weeks. An aide in Booker’s office said that the senator came to understand paint’s contribution to childhood lead exposure as mayor of Newark, N.J., and that including $45 billion for low-income housing lead paint removal in a "once-in-a-lifetime" infrastructure investment package "is a top priority for him."

Separately, the National Center for Healthy Housing wrote congressional leaders earlier this month asking for an infrastructure package to include a $19 billion carve-out to pay for replacing 25 million lead-contaminated windows. Though the effort would not eliminate lead paint in housing, windows are a major source of lead exposure to kids because paint breaks up into dust as they are opened and closed. Replacing lead-contaminated windows, which, by definition, are common in older housing stock, would also have secondary gains in energy efficiency and climate mitigation.

"Addressing lead paint and healthy homes as part of a strategy to provide upgraded, resilient, more equitable and affordable housing in the infrastructure plan promises a transformational change," the center writes. "Our nation’s homes truly cannot be resilient or affordable without also being healthy and safe."

‘Drinking water is an easier sell’

While kids’ health experts agree that lead paint is an important source of exposure, not everyone faults the Biden administration for focusing on drinking water.

Tom Neltner, director of the Environmental Defense Fund’s chemicals program, notes that tap water is still the largest source of lead exposure for children under 1 year old because it is used to mix baby formula. He also argues that their exposures are often missed because kids’ blood isn’t routinely tested for lead until they are toddlers, at 1 and 2 years old.

"For the youngest children, it really is the water that is significant," he said, adding that it is "tough to pick and choose."

He also says that, in many ways, lead pipes are easier to remove than paint, noting that drinking water utilities that would be responsible for replacing pipes are also lobbying Congress for the funding.

Linda McCauley, dean of the School of Nursing at Emory University, also said the Biden administration’s plan may just reflect that lead pipes would be easier to include in an infrastructure package.

"Drinking water is an easier sell right now," she said. "It lines up with this administration’s priorities, even though lead paint and dust have always been a problem and will remain a problem that EPA and others are focused on."