Blue wave could bring the Midwest climate band back together 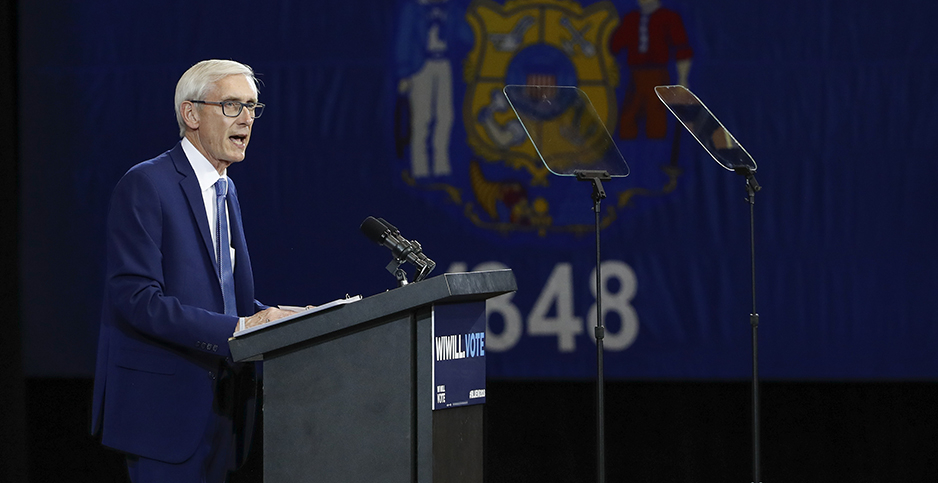 The band broke up years ago. Or maybe it just stopped playing, as new members joined and the old harmonious notes turned sour.

The band that broke up before it put out its first album was known as the Midwestern Greenhouse Gas Reduction Accord (MGGRA), a nearly forgotten 2007 compact among six governors who realized climate change was a pressing state and regional issue.

Their goal: to reduce their states’ carbon footprints and begin the transition to an energy economy built upon efficiency, renewables and carbon cap and trade.

But after statehouses changed hands during the tea party-fomented red tide of 2010, and fossil fuel lobbyists started vying for Midwestern governors’ loyalties, the whole thing ground to a halt. And three polarizing presidents and a U.S. Congress bereft of climate champions later, there was little left to reclaim. MGGRA was buried by MAGA.

After Tuesday’s near blue sweep of Midwestern governorships, climate activists and Democrats see a new day dawning, with Tony Evers in Wisconsin, Tim Walz in Minnesota, Gretchen Whitmer in Michigan, J.B. Pritzker in Illinois and Laura Kelly in Kansas. Only Iowa elected a Republican governor, incumbent Kim Reynolds, who took office in 2017 after then-Gov. Terry Branstad became the U.S. ambassador to China.

Doyle, now 72 and a lawyer with Wisconsin-based firm Foley & Lardner LLP, said the Midwest’s new crop of governors will almost certainly rekindle efforts at climate cooperation, even if reviving the old name and acronym — MGGRA — would be like naming the latest Tesla "Camry Model X."

"You know, when we started on this in 2007, climate change was not a partisan issue," Doyle said in a telephone interview this week. "We really were a group of diverse leaders with a common understanding that this was a problem that deserved our attention."

Looking at today’s radically changed Midwestern political landscape, Doyle said he is confident climate policy will become a priority again, both within states and among them. "I don’t see any reason why these Democratic governors would not move forward on this," he said.

Of the new Midwestern governors-elect, all have said climate change is a problem that requires state-based action, and at least two — Pritzker and Whitmer — have embraced the concept of a 100 percent renewable energy standard.

Whitmer and Evers have also said they will join the U.S. Climate Alliance of governors backing the Paris climate agreement, and Evers has said he will restore climate change as a science and policy priority within the state’s Department of Natural Resources.

But beyond that, what else can a group of new state executives do together to solve one of the most complex environmental challenges of our time? And is there a chance of reviving the Midwestern greenhouse gas reduction plan?

"It’s really way too early to know whether that’s going to take form, but you can begin to see the contours and the outlines," said Barry Rabe, a professor, author and climate policy expert at the Gerald R. Ford School of Public Policy at the University of Michigan.

At the outset, Rabe said, Midwestern governors could pledge "some kind of new commitment to accelerate the energy transition," including through greater reliance on renewable energy resources like wind and solar that don’t necessarily adhere to state boundaries.

Governors could also work together to reconcile state regulations that govern renewable energy permitting and siting, including transmission lines that carry wind and solar power from rural production areas to load centers like Chicago, Detroit, Milwaukee and Minneapolis-St. Paul.

Wisconsin, for example, has some of the most restrictive rules in the nation for siting commercial wind farms. Doyle said the rules have robbed the state of hundred of millions of dollars of direct and indirect investment. "Obviously, Wisconsin was left behind," he said. "Developers who were lined up to build turbines here just said they’d move the project to Minnesota."

Experts also said Midwestern states are well-positioned to ride the nationwide boom in solar energy, especially where policies favor net metering and distributed generation. "It wasn’t very long ago when there were large sections of these states that had no penetration of renewables," Rabe said. "That has changed, and it’s going to continue to change."

Some states, like Minnesota, are clearly leading their neighbors in that energy transition, Rabe said, both in the installation of clean energy infrastructure and in the adoption of regulations and market mechanisms to incentivize low- and no-carbon energy sources.

Minnesota’s landmark law, the Next Generation Energy Act of 2007, was one of the first to seek economywide carbon reductions, with a goal of reducing carbon dioxide emissions by 80 percent below 2005 levels by 2050. The state also has also long factored the cost of emissions into utility planning decisions, and last year increased its cost calculation to account for the broader "social cost of carbon," which experts say is much higher.

Rabe said some Midwestern states might also revisit the idea of a carbon tax or a cap-and-trade system that would allow emitters more flexibility in meeting climate change objectives. Such market-based strategies may be more politically palatable than top-down regulation in traditional industry and manufacturing states like Michigan, Wisconsin or Illinois.

If a cap-and-trade system were to take hold in the Midwest, Rabe said, it’s possible that a revived MGGRA could provide the administrative backbone for a regional carbon trading market, similar to the Regional Greenhouse Gas Initiative (RGGI) in nine Northeastern states, or California’s cap-and-trade program that is linked to a similar program in Quebec.

Rolf Nordstrom, president and CEO of the Great Plains Institute, which has been working on clean energy policies at the state and local level and in the private sector since 1997, said the slate of new Midwestern governors could help bring "size and scale" to solving the climate problem through a regional compact.

But with regard to a revived MGGRA, Nordstrom said, "You can never go back to high school." Energy technologies and markets have changed so dramatically since 2007, he said, that the role of government is now more nuanced and in some cases unnecessary to move forward.

"Just over the last three years or so, the economics of renewable energy technology in particular have become so compelling that it just makes sense for your citizens, your ratepayers and your utilities to be investing more heavily in clean energy," he said.

Howard Learner, another longtime observer of Midwestern energy politics as president and executive director of the Chicago-based Environmental Law & Policy Center, said one of the key challenges facing all of the region’s new governors is how to integrate a global problem like climate change into new frameworks that meet different states’ political, economic and environmental goals.

"You’re going to see each of these new governors try to move his or her state into a leadership role, and that’s a good thing," Learner said. "But you’re also going to have to find common cause with Republican governors in Indiana, Ohio and Iowa."

There’s also the challenge of working with or around the Trump administration, which has rescinded the Clean Power Plan and scrapped much of the framework that states were planning to use to make energy transitions over the next 50 years.

Rabe said he believes that in the absence of federal leadership, more states will begin looking at innovative ways to bring their carbon emissions down, including through market mechanisms.

"If the band is getting back together, it will be with an entirely new set of players," he said of MGGRA, "and they will probably be playing different music."