Bribes, planes, power. Inside a scheme to keep coal alive 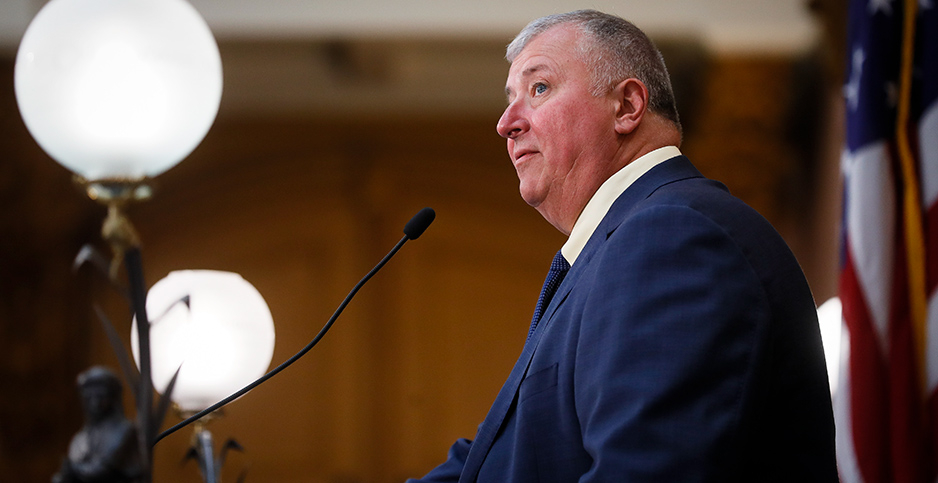 In January 2017, Larry Householder, the future speaker of the Ohio House of Representatives, climbed aboard an energy company jet for a trip to Donald Trump’s presidential inauguration in Washington.

The trip marked a new period of cooperation between Householder and FirstEnergy Corp. as they worked to save the company’s struggling coal and nuclear plants in Ohio and Pennsylvania.

It came as FirstEnergy prepared to mount an aggressive lobbying campaign for a federal bailout of its ailing facilities. Back in Ohio, Householder was devising a plan to regain his old job as state House speaker. According to federal prosecutors, his strategy relied heavily on political donations from FirstEnergy.

Householder and four associates were arrested by FBI agents yesterday and charged with racketeering. The criminal complaint asserts that an energy company paid a dark money group controlled by Householder about $60 million between 2017 and 2020.

The Republican lawmaker allegedly used the money to enrich himself, bolster his political allies and promote a bill that bailed out FirstEnergy power plants. The scheme, if true, shattered historical precedence.

David DeVillers, the U.S. attorney for the Southern District of Ohio, called it "likely the largest bribery, money laundering scheme ever perpetrated against the people in the state of Ohio."

"The conspiracy was to pass and maintain a $1.5 billion bailout in return for $61 million in dark money that were used for various things," he said at a press conference yesterday.

"One, to line the pockets of the defendants. Two, to build a power base for Larry Householder and, three, to further the conspiracy, that is to further the affairs of this enterprise."

In Ohio, news coverage centered on the sudden downfall of one of the state’s most powerful politicians. But in energy circles, the focus is on FirstEnergy, a utility that has tied itself closely to the Trump administration and its goal of boosting coal and nuclear power.

FirstEnergy CEO Charles Jones met with Trump in 2017 to try to stave off the bankruptcy of a subsidiary, FirstEnergy Solutions, that once ran the company’s power plants (Energywire, Aug. 23, 2017). Jones loudly supported the Department of Energy’s push to provide financial support to struggling coal and nuclear facilities (Energywire, Nov. 14, 2018). The company has also paid Jeff Miller, a prominent fundraiser for the Trump campaign and onetime adviser to former Energy Secretary Rick Perry, $1.2 million in lobbying fees since 2017, according to Senate records. But they ultimately failed, with the Federal Energy Regulatory Commission rejecting an Energy Department proposal to subsidize coal and nuclear plants.

FirstEnergy’s advocacy campaign played out as its coal and nuclear plants struggled against a deluge of cheap natural gas. The Akron, Ohio, utility made the decision to exit the competitive wholesale power generation business in 2016, and FirstEnergy Solutions filed for bankruptcy in 2018. It emerged as a new company under the banner of Energy Harbor Corp.

"I think overall they pushed strongly in the early days of the Trump administration for some sort of bailout for coal and nuclear plants, including their own of course," said Dave Anderson, who has written extensively about the company’s lobbying for the Energy and Policy Institute, a utility watchdog that supports a transition to renewable energy. "Failing to get that, they shifted their focus to acquiring bailouts from states like Ohio and Pennsylvania, Ohio being the place where they had the most success."

H.B. 6, as the Ohio bailout was officially known, provides $150 million annually to two nuclear plants now owned by Energy Harbor. It also included a $1.50 monthly surcharge on ratepayers’ electric bills. Those fees, which amount to $60 million annually, support a pair of coal plants owned by a consortium of utilities, including FirstEnergy (Climatewire, July 30, 2019). The law also rolled back Ohio’s renewable energy and energy efficiency standards.

Householder allegedly channeled money into Generation Now, a 501(c)(4) nonprofit organization that did not have to disclose its donors to the public. The group spent heavily to support his political allies in Republican primaries in 2018 and to promote passage of H.B. 6.

Later, Generation Now received $38 million to help defeat a ballot measure aimed at overturning H.B. 6. Some of that money was spent attempting to bribe signature collectors by offering them money and airfare to stop collecting names, according to prosecutors. The measure never garnered enough signatures to be included on the ballot.

What FirstEnergy knew about Householder’s activities is unclear. The company is not named in the criminal complaint, but there is little doubt it is the utility referred to by the government as "Company A."

The firm described in the complaint has the corporate structure of FirstEnergy and the same bankruptcy timeline as FirstEnergy Solutions.

It also quotes the CEO of "Company A Corp" as telling financial analysts during its 2016 fourth-quarter earnings call the following: "In Ohio, we have had meaningful dialog with our fellow utilities and with legislators on solutions that can help ensure Ohio’s future energy security. Our top priority is the preservation of our two nuclear plants in the state, and legislation for zero-emission nuclear program is expected to be introduced soon."

Jones said those exact words in FirstEnergy’s 2016 fourth-quarter earnings call, according to a transcript of the call.

DeVillers, the U.S. attorney, told reporters, "Everyone in this room knows who Company A is," but he explained he would not name the firm because no one there had been charged. He noted that the federal investigation is far from complete, saying the government is moving from a covert stage of its inquiry to a public one.

"As of this morning, there are a lot of FBI agents knocking on a lot of doors, asking a lot of questions, serving a lot of subpoenas," he said.

Federal investigators allege widespread coordination between Householder and Company A. The complaint notes that Householder had 30 phone calls with the CEO of the company between January and July in 2019, the period when Householder became speaker and the bailout law was enacted.

The charges name Juan Cespedes, a lobbyist for FirstEnergy and FirstEnergy Solutions, as a "conduit" between Company A and Householder’s dark money group. Cespedes was arrested yesterday.

"The combination of phone records, bank records, and text messages paint a clear picture of the partnership between the Enterprise and Company A in working towards their agreement," the complaint said.

FirstEnergy released a statement confirming it had received subpoenas in relation to the investigation. The company declined to provide answers to a list of questions from E&E News, except to note that FirstEnergy Solutions began operating independently in 2016.

FirstEnergy has sought to distance itself from its troubled power generation subsidiary for years. When The Blade of Toledo published an editorial criticizing H.B. 6 earlier this year, Jones wrote a scathing response saying, "The two companies have no relationship to one another, and the actions of Energy Harbor have no legal, financial, or other bearing on FirstEnergy Corp."

Legal documents and financial filings suggest otherwise. FirstEnergy Solutions described itself in bankruptcy proceedings last year as a wholly owned subsidiary of FirstEnergy. FirstEnergy Solutions paid its parent company $152 million in shared services, including lobbying, in 2019, according to FirstEnergy’s annual filing with the Securities and Exchange Commission. Both developments were first reported by the Energy and Policy Institute.

Supporters of H.B. 6 have touted the law as clean energy legislation, noting its support for the carbon-free electricity produced by Energy Harbor’s nuclear plants. But its detractors say it has harmed the climate.

Clifty Creek and Kyger Creek, the two coal plants that receive subsidies from the bill, emitted a combined 12.6 million tons of carbon in 2019, according to EPA data. That’s about the same as the emissions released by 2.5 million cars in a year.

The bailout also provided a lifeline to W.H. Sammis, a large coal plant that FirstEnergy Solutions had planned to retire. After H.B. 6 passed, the power company rescinded that decision. Sammis’ emissions were about 4.6 million tons in 2019.

"What is inside the bill is a bailout for coal plants and a gutting of energy efficiency and renewables," said Leah Stokes, a professor at the University of California, Santa Barbara, who has studied utilities’ attempts to subvert climate policy.

She praised federal investigators for their efforts but added, "We actually kind of knew this was happening anyway. It didn’t matter, and it didn’t stop the vote at the end of the day."