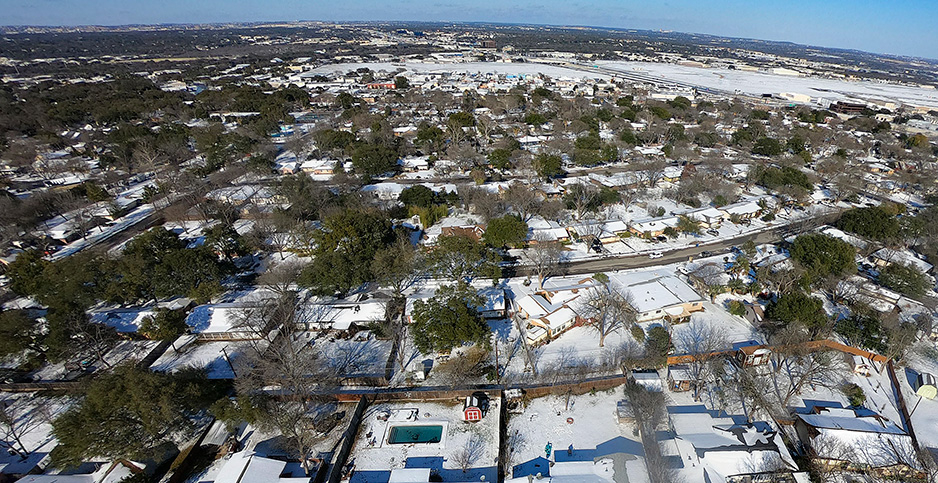 The February deep freeze in Texas could reverberate into the state's scorching summer by leaving damaged swimming pools in its wake. Billy Calzada/Newscom

It’s finally May, which means the unofficial outdoor swimming season has arrived for a half-million Texas pool owners.

At least for those with functioning pools.

A little-known but widespread impact from February’s deadly record-shattering winter storm was the hard freeze on hundreds of thousands of Texas swimming pools, some of which are larger than the homes they adjoin. Residential and public pool owners watched helplessly as waterlines burst, pumps froze, filters shattered and glaciers floated on water surfaces.

The pool problem — minor compared with 111 recorded storm deaths and severe cold exposure for millions of Texans — reflects how climate change is disrupting what used to be routine seasonal activities everywhere. That’s especially true in Texas, where weather extremes and disasters are piling up fast.

"I was born in Dallas, and this is the first time we had anything like this," John Grubbs of McKinney, Texas, said in a telephone interview last week detailing damage to his 55,000-gallon pool. "The damage [across Texas] is probably going to hit $1 billion. On my street there’s probably six pools, and we all took the same hit. And that’s just one friggin’ street."

Only months before the storm, Grubbs paid roughly $35,000 to remodel the pool at his home where he and his wife have lived for 25 years. He blamed the state’s grid operator, the Electric Reliability Council of Texas (ERCOT), for failing to maintain power as weather conditions worsened between Feb. 13 and 17. The roughly $7,000 in damage to his pool was covered by insurance, but he considered himself lucky to file a successful claim.

"If I’d had an honest heads-up from ERCOT that said you’re going to be losing power for 16 hours, I could have done more prep and saved money," he said.

According to industry estimates, Texas has more than a half-million private and semi-private swimming pools, exceeded by only California, Florida and Arizona. While often viewed as trappings of the wealthy, pools in hot climates are also respites from scorching summer heat. Public pools, for example, provide relief for millions, especially in urban areas, who lack sufficient home cooling.

An official with the Houston Parks and Recreation Department said she did not know the extent of damage to the city’s nearly 37 public pools and spray pads from February’s storm, but that all pools were closed indefinitely due to COVID-19 exposure risk.

Private pool owners won’t face such restrictions, but they will face rising costs and liabilities due to extreme weather events and climate warming. Those risks will factor into costs and development decisions, experts say.

"With growing frequency, those of us in the real estate development arena have to consider the effects of extreme weather on a project and the myriad ways those weather events can derail budgets and schedules, if not appropriately considered," Omar Rihani, vice president of Project Management Advisors Inc., a real estate advisory firm, wrote in the trade publication Multi-Housing News last week.

"Several multifamily communities were caught off guard by damage to their outdoor pools, typically open throughout the winter given the state’s historically mild temperatures," he added. "By failing to winterize these features — draining water-circulating equipment or emptying pools — owners incurred considerable damage."

According to NOAA’s National Centers for Environmental Information, Texas has experienced 124 disasters with $1 billion or more in losses since 1980, more than any other state. It also leads the United States in total cumulative losses from disasters over the same period, at roughly $290 billion.

February’s extreme winter storm, named Uri, could be the costliest yet. Some economists have estimated the storm’s damage at more than $200 billion, in part because impacts were so widely felt across the state. The next most costly disaster in Texas history was 2017’s Hurricane Harvey, whose $125 billion in damage was felt the hardest along the Gulf Coast, the Houston metro area and points east.

A Texas-sized swimming pool can cost between $10,000 and $100,000 depending on size, shape, construction materials, landscaping and add-ons like heating systems, according to industry estimates. Yet as in other Sun Belt states, most are not winterized because few owners expect the kind of severe, prolonged cold that gripped the state in mid-February.