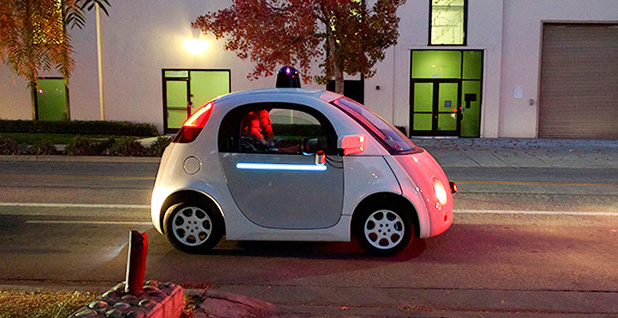 Automakers are calling for California to pull back on proposed autonomous vehicle regulations, saying the state should defer to more flexible federal guidelines released in September. Photo courtesy of Google.

When the Department of Transportation released its safety guidelines for self-driving cars in September, the move was meant to assert federal jurisdiction over an issue for which state regulators were beginning to make their own rules.

But the 112-page document did little to end the regulatory turf war over autonomous vehicles and may have instead sparked more concerns.

Now, automakers are calling for the state to step aside and let the federal government proceed with its purposely flexible guidance. But safety advocates say neither proposal goes far enough to ensure road safety, and one key California senator said the Golden State should control its own road rules.

The debate takes place as California and the federal government both receive comments on their disparate proposals. It’s a conflict that underscores the challenges of regulating a technology that has not yet been fully realized, and one that consumer advocates say has unique risks.

"You are dealing with something that is so new that we may not yet have an incredible understanding of it yet, and there is a disagreement of how to handle that," explained former National Transportation Safety Board Chairman Mark Rosenker. "Therein lies the challenge."

Self-driving cars blur the traditional jurisdictional lines in which states govern drivers and the federal government sets vehicle safety standards. An autonomous car becomes its own driver all if not most of the time, leading to questions over who should govern what aspect of the vehicle.

The National Highway Traffic Safety Administration guidelines for autonomous vehicles are meant as an answer.

"As motor vehicle equipment increasingly performs ‘driving’ tasks, DOT’s exercise of its authority and responsibility to regulate the safety of such equipment will increasingly encompass tasks similar to licensing of the non-human ‘driver,’" the guidelines say.

As such, the NHTSA guidelines ask automakers to submit 15-point safety assessments explaining how they would handle issues like physical vehicle safety, cybersecurity and object recognition.

The guidelines are purposely vague to avoid stifling innovation by being too prescriptive.

Similarly, the guidance urges states to evaluate their laws to ensure they would not impede the safe development of autonomous vehicles. The guidance does not prohibit states from setting up their own permit application process for self-driving cars but says the scope of those applications should be limited to automakers explaining how they train their test drivers, submitting evidence that they could pay for damage following an accident, and certifying that they meet federal motor vehicle safety standards, complying with the NHTSA guidelines.

While states can require automakers to prove they are following NHTSA guidance, the policy also says, "This guidance is not intended for states to codify as legal requirements for the development, design, manufacture, testing and operation of automated vehicles."

Under the proposal, California would take the NHTSA-optional 15-point safety assessments and require that automakers submit them to the Department of Motor Vehicles in order to obtain a permit for testing autonomous vehicles without a driver. In addition to receiving DMV approval, automakers would also need to obtain the approval of any of the state’s 482 municipalities and 58 counties where they might want to test their cars.

California has often led the federal government when it comes to regulations. For example, it was California’s attempt to regulate tailpipe greenhouse gas emissions that led to federal carbon dioxide standards for cars. Similarly, other states have adopted California’s zero-emission vehicle standards.

California Sen. Jerry Hill (D), who represents the Silicon Valley area that’s home to the headquarters of both Tesla Motors Inc. and Google, said he sees no reason why autonomous vehicles should be any different.

"To me, California, in so many areas, has been a leader … and many states then follow and the federal government then follows the standards that are adopted in California," he said. "We have the technology; we should be the leader in establishing appropriate safe and proper regulations related to autonomous vehicles."

That idea is worrisome to those who hope for a federally led regulatory regime.

"California has a history of setting the standards," said Amitai Bin-Nun, director of autonomous vehicles at Securing America’s Future Energy. "It would be one of the world’s largest countries if it was one on its own, so it has a lot of weight, and it is really important that they get this right."

That idea is not lost on automakers.

Audi Director of Government Affairs Brad Stertz told a DMV workshop that other states are looking to California before writing their own policies.

"The concerns that I and my colleagues in the industry have about creating a precedent here are very real," he said. "Some of the requirements you have are very specific to California because you were out first, and we just need to make sure that the standards make sense for all 50 states and don’t create a regulatory rock on our shoulders that is very hard to move."

"We believe a formal and overly prescriptive program simply cannot keep up with the pace of innovation," Global Automakers Safety Manager Paul Scullion said. "An autonomous vehicle policy should be national in scope, allowing manufacturers to build vehicles that can be tested and sold in all 50 states."

Many automakers criticized the DMV for effectively codifying NHTSA’s optional 15-point safety assessment, with the Self-Driving Coalition for Safer Streets arguing that the guidelines were purposely structured to be optional.

"We agree that community engagement is important, but we believe it should be done in a better and more efficient way," Google Director of Safety Ron Medford said. "Having three layers of government overseeing the testing and deployment of self-driving cars creates a patchwork and is unworkable."

Hill said he will be talking to the DMV about making the regulations science-based. He said he’d rather work with the agency first versus opting for legislation to correct problems.

"I don’t see these major companies fleeing California because the rules are too onerous," Hill said. "I’m going to be urging the DMV to make sure that hopefully the regulations are consistent with those federal guidelines and they don’t put any arbitrary roadblocks that delay implementation of the technology."

NHTSA declined to comment on the California proposal, but Administrator Mark Rosekind spoke at the workshop, largely touting the federal approach.

Though he did applaud California for its transparent process in drafting its new regulations, his comments on the state’s proposal underscored the challenges both agencies face.

"I know from experience: It is exceptionally difficult to strike the right balance, and it is important that we all endeavor to keep our approach nimble and flexible so we can respond as innovation continues to bring this new technological revolution forward," he said.

"It is not as if we dreamed this up in Washington. There was a lot of dialogue and back-and-forth with folks who are on the ground," he said at the workshop. "We were very specifically clarifying what NHTSA is going to be responsible for and what we think states are responsible for."

He noted that the NHTSA guidelines are purposely flexible because neither the federal government nor the industry knows what safety elements should be required (Greenwire, Oct. 20).

"We don’t know how to set the standards, and there is not a lot of certainty about how you measure the safety and what the right safety standard is," he said. "Technology is not born with a regulatory framework in place, and you have to be careful in deciding what standards we want to set."

Still, he said, NHTSA took a risk in staying out of the fray: Neither automakers nor states are required to comply with federal guidance.

That’s something lawmakers have noticed, with Sen. Susan Collins (R-Maine) commenting this week that NHTSA should take steps "to ensure that states do not arbitrarily mandate" aspects of the guidelines and create a patchwork of regulations (E&E Daily, Nov. 17).

With automakers already testing on California roads for years, DMV Director Jean Shiomoto said the department couldn’t wait for NHTSA to come out with actual regulations before updating the state standards.

"We started placing bets on when NHTSA was going to release those regulations," she said at the workshop, noting that the guidance is a step forward but not enough.

Others on the ground agree that DMV has to act on autonomous vehicles precisely because NHTSA hasn’t.

"DMV is doing what it has to because NHTSA hasn’t done what it’s supposed to," said Jamie Court, president of Consumer Watchdog, a Santa Monica, Calif.-based advocacy group. "California’s DMV has no choice but to protect its drivers on the roads."

Though Court says he wishes both NHTSA and DMV standards were stricter, having the government test autonomous vehicles to ensure safety instead of relying on automakers to self-certify, he acknowledged that "California would welcome an enforceable motor vehicle safety standard."

While NHTSA guidelines do signal that the agency will eventually move toward rulemaking, Court said the longer that takes to happen, the more confusion will exist.

"If NHTSA wants one standard, then they should propose a federal standard," he said. "Absent that, there will be 50 standards" from the different states.

Sen. Hill said the state has a role because the technology is currently on California roads and "was largely developed here."

"I want to make sure that California remains a leader in developing self-driving autonomous vehicles," he said.

Though he did express concerns that the regulations requiring municipalities’ approval for testing "would kill an industry quickly," Hill said he believes states should be able to develop their own regulations, as long as they work within NHTSA guidelines.