Can anti-coal tactics work against plastics? 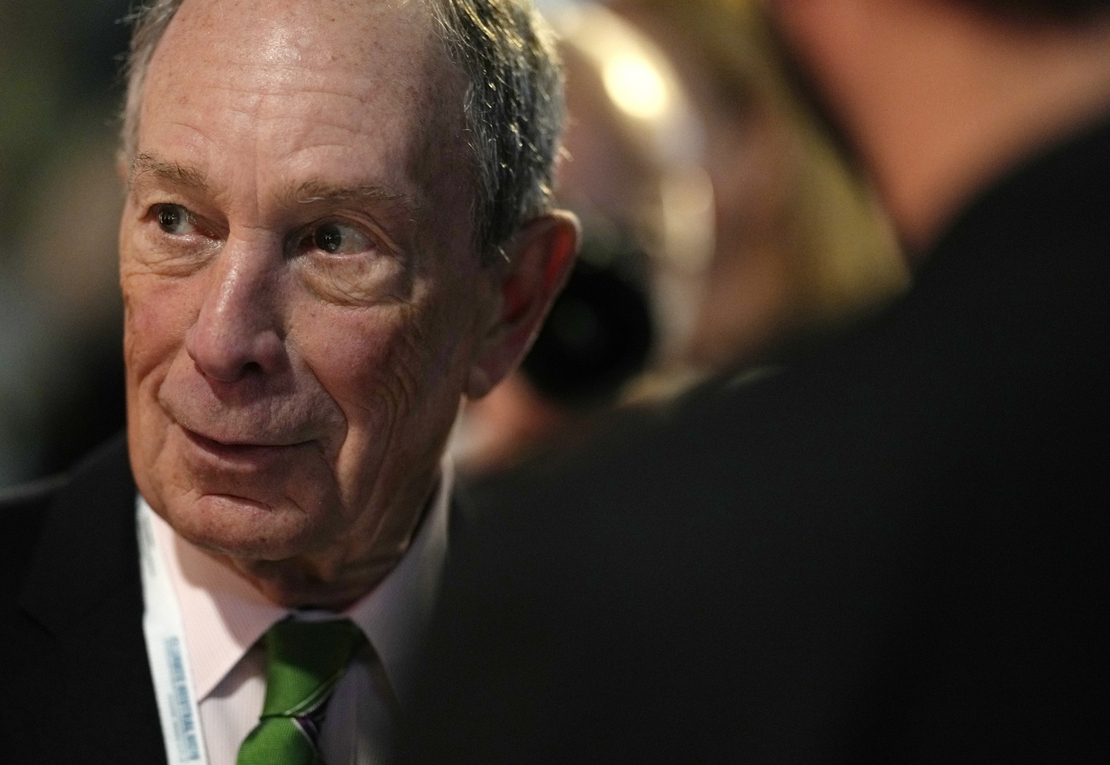 One of the most significant efforts to halt the plastics industry in its tracks sees a path to victory through grassroots advocacy, an avenue proponents hope will help combat a powerful and rapidly growing sector.

An $85 million campaign — Beyond Petrochemicals — announced two weeks ago by billionaire and former New York City Mayor Michael Bloomberg will target petrochemical facilities, a leading source of plastics, in the name of fighting both climate change and environmental degradation. The initiative will pour funding into ongoing efforts led by an array of advocacy organizations, a number of them based in areas grappling with petrochemical activity.

“Mayor Bloomberg has been enormously effective at protecting the public from damages caused by coal power plants, tobacco products and guns,” said Judith Enck, a former EPA regional administrator during the Obama administration and head of the group Beyond Plastics. “His new initiative focused on petrochemical facilities will protect impacted Black and brown communities and the entire planet in similar fashion.”

Enck’s group is set to benefit from the initiative. Others include the Bullard Center at Texas Southern University, Defend Our Health, Earthjustice, Earthworks, the Hip Hop Caucus, the Louisiana Bucket Brigade and Rise St. James, as well as other advocacy organizations. They will be assisted by the Resources Legacy Fund, which builds secure funding for environment-focused causes and connects philanthropists with communities.

Proponents hope the effort can match the success of another Bloomberg campaign, Beyond Coal, which pledged to retire 30 percent of U.S. coal plants before 2020 and wound up doubling that number. That campaign helped bring down national emissions by more than 600 million metric tons, a major feat.

Beyond Petrochemicals, however, will confront different dynamics. Plastics, a petrochemical product, are cheap, easy to manufacture and growing in abundance. The United Nations projects that plastics manufacturing will double by 2040; the International Energy Agency has meanwhile predicted that the wider industry will surpass coal-fired carbon emissions within the coming decade.

Bloomberg Philanthropies launched the campaign with the billionaire himself declaring the United States to be at a “critical moment” for stopping petrochemical and plastics activity in its tracks (E&E News PM, Sept. 21). He linked the industry both to climate change and to environmental justice struggles, citing the low-income communities where industrial activity takes place, with disproportionate impacts for people of color.

But how the new campaign will work is still unclear, and Bloomberg Philanthropies said the broader operation is still being built up. The initiative will also face hurdles — as well as a landscape far different from the one that confronted the Beyond Coal campaign.

What we know so far

The most concrete reality around the Beyond Petrochemicals campaign is that it is in early stages. In an unattributed statement via email, Bloomberg Philanthropies said it was “continuing to bring staff on board” and that a full team would be announced at a later date.

But some elements of the campaign are already becoming clear, including its emphasis on grassroots organizing. Bloomberg Philanthropies was in conversations with advocacy groups for more than a year before settling on its aims, Enck said.

Now, it hopes to bolster gains already made by advocates deep in the fight, with two recent victories emerging as particularly notable.

Last month, a Louisiana judge scrapped a permit for a deeply controversial Formosa Plastics facility in an area so notorious for health issues it is nicknamed “Cancer Alley.” That victory stems from an ongoing fight by a number of groups, including Rise St. James (Greenwire, Sept. 15). A separate South Louisiana project also faced cancellation last month.

Beyond Petrochemicals aims to ensure that such wins continue. When it launched, the campaign announced more than 120 plants would be subject to its scrutiny. Via email, Beyond Petrochemicals said the facilities were chosen both by consulting the Environmental Integrity Project’s Oil & Gas Watch database and with input from community organizers. The campaign did not provide a list of the facilities, but it said they are concentrated in Louisiana, Texas and the Ohio River Valley — all home to major industrial activity.

Members of recipient organizations have indicated the funding will largely go toward ramping up their ongoing work.

“As a native Louisianan, I understand the horrors of Cancer Alley and the destruction fossil fuel and toxic facilities have caused. I have seen the cost to communities and to our climate of these polluting facilities,” said Rev. Lennox Yearwood Jr., who is chairing the campaign and serves as CEO of the Hip Hop Caucus, in a statement.

With the investment, Yearwood said, “we can halt the cooking of the planet and poisoning of our communities.”

Another clear trend line is industry sentiment. Immediately following the campaign’s launch, both the American Chemistry Council and the Plastics Industry Association fired back, panning the endeavor as a “losing bet” (Greenwire, Sept. 22). Companies have not yet indicated that they see the campaign as a major threat, but they have largely attributed its launch to bad faith assumptions around plastics stemming from advocacy organizations.

In a statement responding to the announcement, ACC CEO Chris Jahn urged “the NGO community to put fundraising rhetoric aside and join us in maximizing chemistry’s potential to solve the world’s sustainability challenges.”

A new kind of fight

Unlike coal, plastics are wildly popular and deeply interwoven into modern life across the United States in a way that will be challenging to untangle.

Beyond Petrochemicals is still in nascent stages, limiting any extended legal analysis around its tactics. But Seth Jaffe, an environmental compliance attorney with Foley Hoag LLP, noted the campaign’s emphasis on petrochemicals, rather than plastics, in its name and announcement.

“In modern regulatory lingo, the reduction in plastic pollution will just be a co-benefit of the campaign’s efforts to stop the construction or expansion of all these facilities,” Jaffe said. “I don’t know if this was part of the rationale behind the strategy, but it does allow the campaign to avoid having to discuss the convenience plastics deliver to consumers.”

Coal also had a replacement: natural gas. But what exactly lies beyond petrochemicals — along with plastics — is not entirely clear. When asked, the Beyond Petrochemicals campaign restated its focus and added that its emphasis will be on targeting the facilities.

Part of its broader work, the campaign said, “will also center on the reduction of single use materials as well as on reuse,” with the effort focusing “first on the most unnecessary uses and those easiest to replace and scale up from there.”

Many proponents of shifting away from plastics have similarly emphasized moves toward reusable items, as well as a bigger embrace of alternatives made of different materials, including compostables. In order to make such shifts, however, experts broadly agree that U.S. infrastructure would need to be scaled up dramatically, a process that would take years.

Efforts to close down petrochemical plants could also prove costly, confronting an industry with deep pockets. Beyond Petrochemicals has under $100 million in investment, and while Beyond Coal launched with $50 million, its successor Beyond Carbon received $500 million in 2019.

Industry members have yet to indicate how they would respond to litigation, but some in the regions under fire are already speaking out, including in the Ohio River Valley, which extends into Pennsylvania.

Jeff Nobers, executive director of the business-labor alliance Pittsburgh Works Together, was among those criticizing Bloomberg’s announcement, offering that members of the coalition “should immediately stop using natural gas, gasoline, aviation fuel, plastics and other materials derived from fossil fuels in their everyday life” in order to have more credibility.

And plastics interests have long defended their products, arguing they are key for many aspects of modern life and serve an important role in the energy transition.

The industry has also backed technologies like “chemical recycling,” which strip plastics down to their chemical form for reuse (Greenwire, Feb. 28). Advocates worry chemical recycling will cause more environmental problems, but companies argue that investing in those technologies will help address plastics pollution and climate change.

At least 20 states have also adopted policies bolstering chemical recycling and federal lawmakers have also shown interest, particularly Republicans, who may have control of the House next year. That could boost prospects for plastics and make efforts fighting them more challenging (E&E Daily, June 25, 2021).

Even with that outlook, proponents believe the fervor driving the campaign will ultimately bring success and feel no other outcome is acceptable. Enck said the new campaign will be similar to Beyond Coal, with the hope of aiding environmental justice and climate goals at a pivotal moment.