Can Biden’s alliance with greens outlast the convention? 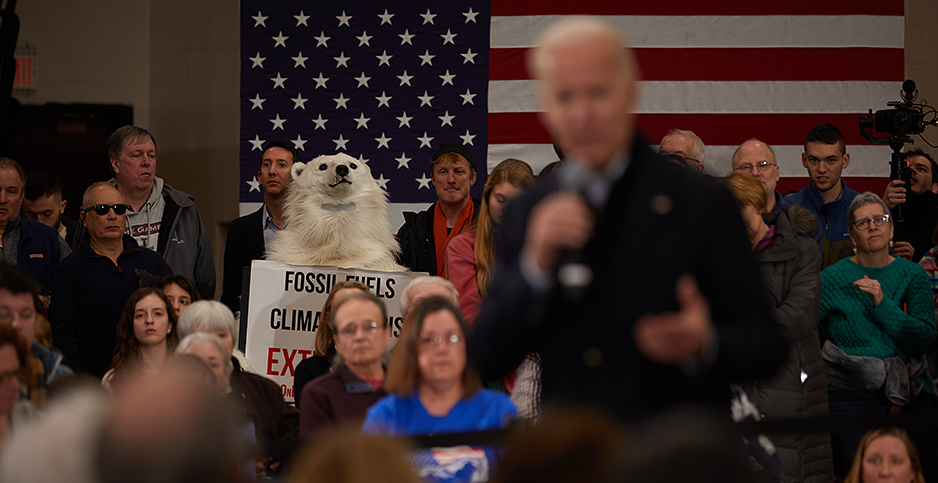 This week’s Democratic National Convention will test a months-old cease-fire between climate activists and the party establishment.

Their detente is staked on a common enemy, President Trump. Both sides say they recognize a mutual need to turn out Democratic voters. And a unity campaign by presumptive Democratic nominee Joe Biden and Sen. Bernie Sanders (I-Vt.) has fostered working-level relationships between activists and insiders.

But some activists are already planning for hostilities to resume after the election. And they say Biden — if elected — has a lot of work to do if he wants their support in the future.

But for now, the truce appears to be holding.

Brett Hartl, of the Center for Biological Diversity Action Fund, credited the former vice president for seeking ways to appease supporters of Sanders’ presidential campaign in a way that Hillary Clinton, the 2016 Democratic presidential nominee, did not.

He also said it was critical that Biden responded to those conversations with concrete action — such as embracing aggressive climate targets like carbon-neutral electricity by 2035.

Biden "didn’t always accept [their views]. He didn’t always agree. It’s not like they just did whatever the Bernie people wanted. But Hillary didn’t do any of that," Hartl said.

"There was a ton of bitterness [in 2016], and there was no effort really to bring the Bernie people back into the fold. And so [for Biden] to talk to the progressive wing on all of the issues, I will give them credit for putting in the good-faith effort," he said.

Cristóbal Alex, a senior adviser to Biden who has worked on climate issues, said the campaign has made outreach to progressives a central tenet of its strategy.

"Joe Biden, being who he is, never once spiked the football. We never really even had a real victory lap, or wanted to, during the primary, because it was all about getting the work done," he said.

Alex spent Friday afternoon speaking to progressive activists from a panel at Netroots Nation, the annual progressive gathering. The Biden campaign dispatched several staffers to the three-day event, offering progressives a glimpse into the campaign’s theory of the election — and how it sees activists fitting into it.

Alex said that while Biden has put forward the most progressive platform in the party’s history, the campaign needs activists’ help to keep the election a referendum on Trump.

Heather Booth, the feminist and civil rights activist who is serving as Biden’s director of progressive and senior engagement, said the campaign will cycle through three phases before Election Day.

At each stage, the campaign will need help from progressive organizations, Booth said, adding that those organizations would benefit from Biden in return.

"It’s our job as progressives that this explosive energy of resistance be channeled into electoral action that ends the Donald Trump presidency and sweeps progressive Democrats into power at every level of government," she said.

"It’s our job to make sure that Donald Trump is not just remembered as the most racist, incompetent, misogynistic, dangerous president in memory — but also as the man whose failed presidency spawned such a great mobilization that we can create the most progressive era in modern American history."

That hope is not universal, however.

Few activists see any upside to fighting Biden now, as it would weaken him against Trump. But that detente won’t last past the election, they say.

"We have the right to hold people who we put in power accountable to us," said Anthony Rogers-Wright, policy coordinator with the Climate Justice Alliance, at a Netroots panel.

"On Jan. 21, I’m telling you right now, Joe Biden and [running mate California Sen.] Kamala Harris: We are coming for that ass, and we’re going to hold you accountable."

That’s because time is running out to avert catastrophic climate change, but also because Biden’s government would be seen as a more responsive target than Trump’s — making the risk-reward calculation for direct action more enticing.

"We have exhausted the polite levers our democracy offers us," said Annie Leonard, executive director of Greenpeace USA.

"If we just continue to politely ask, we will perish. We have made documentaries and written books and done scientific research and filled out petitions and done permitted marches and — we have literally done everything that our democracy tells us to do. … And it’s at the point where we need to move into the disruption stage."

Michael Leon Guerrero, executive director of the Labor Network for Sustainability, said climate activists can’t just strategize about pushing Biden. If they get their way, Biden will be creating or expanding a galaxy of advisory councils, boards and other institutions that will shape the government’s climate response.

"We need to prepare just as much for the possibility of defeat as the possibility of victory, because we’ve often fallen short on sustaining our victories. So people need to be thinking about how are we actually implementing … in concrete terms what might come out of [Biden’s climate policy]," Guerrero said.