Carbon price could hike coal use for EVs — study 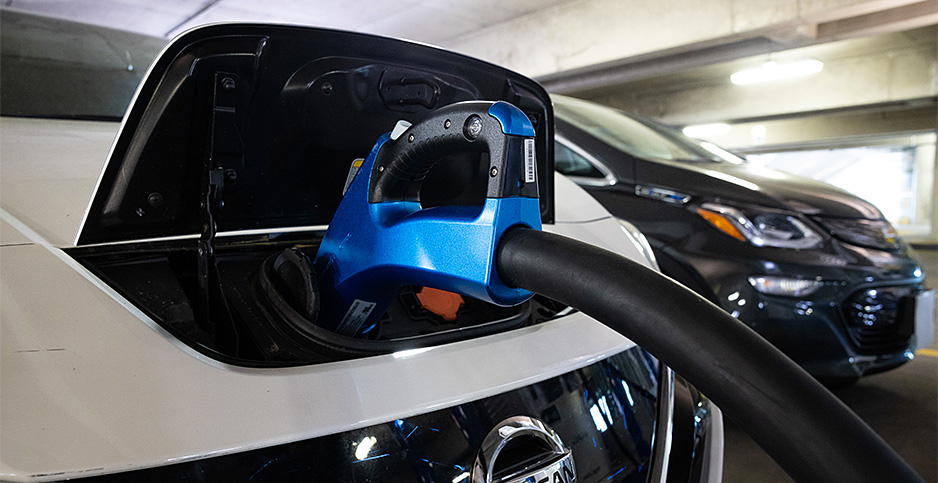 A "moderate" price on carbon combined with an influx of electric vehicles could prop up coal-fired power, offsetting the greenhouse gas emissions benefits of the cars, according to a paper released this month by the National Bureau of Economic Research.

Made public in early April, the working paper was authored by three researchers from Yale University and is part of a series being funded by EPA, although it has not been peer-reviewed.

A moderate carbon price in the range of $5 to $40 per ton and policies to promote EVs are separately good for cutting greenhouse gases, but the policies can counteract each other when used together, the analysis concludes.

The finding held true wherever coal contributes a sizable share of today’s power generation, according to Ken Gillingham, a co-author of the paper and an assistant professor of economics at Yale. The paper included regions covered by grid operators the Midcontinent Independent System Operator, the Southwest Power Pool, the Electric Reliability Council of Texas and PJM Interconnection LLC.

In those regions, the carbon price would push coal generation into the margins, particularly during nighttime peak hours. That time period also happens to be when EV owners do most of their charging. As the number of electric cars grows, those fleets would swell demand for evening electricity, slowing the retirement of coal plants, the study says.

The additional CO2 and nitrous oxide emitted from those facilities would cancel out reductions stemming from electric cars, according to the paper. And emissions of some local pollutants, like PM2.5 and sulfur dioxide, would grow.

"It’s a cautionary tale," said Gillingham. "If you’re a policymaker, you should be considering the policies in concert, in order to avoid these unintended consequences."

One way to counter the effect is to simply increase the carbon price, according to the paper. The negative relationship between the two policies, said Gillingham, "pretty much dissipates" at above $50 per ton.

Still, that’s well above the price used in the Northeast or in California, where last year’s average was about $17, according to estimates from the International Carbon Action Partnership.

A higher carbon price "than we have commonly seen implemented in recent years would be needed for electric vehicles to meet their potential for leading to emissions reductions in a sizable swath of the country," said Gillingham.

The paper excluded California, New York and New England, where coal plants have a minimal footprint.

Its assumptions for EV adoption were drawn from BloombergNEF projections. The firm’s analysts have been bullish about EVs’ future share of the market, concluding that by 2030, a nywhere from just over 20% to as much as 50% of all new passenger car sales would be electric.

The conflict between EV incentives and a carbon price could endure out through 2050, said Gillingham, but would be most likely to occur over the next few decades. "Twenty years from now, we may not have coal plants anyway, but in the next 10 to 15 years, we’re likely to, unless we put in a clean electricity standard," he said.

"This is going to play out in the next several years, over the next decade, for sure."

Its "targeted, specific set of conditions … would have very limited applicability in actual practice" for the nation’s power grid, wrote Betsy Monseu, CEO of the American Coal Council, in an email to E&E News.

"Far better than instituting carbon pricing are policies that incentivize and encourage technology development and innovation," she wrote. And ensuring the grid’s reliability with dispatchable resources like coal would take on "even greater importance" as electric vehicle sales rise and buildings turn to electric sources for energy, Monseu argued.

The working paper lands in the midst of a debate on Capitol Hill about how best to cut emissions. Some Democrats have soured on the idea of a carbon price, and most Republicans remain opposed to the concept, even as oil and gas companies and a broad variety of other industries have expressed support. John Kerry, a climate envoy for President Biden, said recently that Biden believed a carbon price would be necessary to institute "at some point in time."

The administration, however, has not focused on it in its plans for addressing climate change (Climatewire, April 9).

In Congress, the exact carbon price being floated in several pieces of legislation can vary. One Democratic proposal introduced in both chambers, by Rep. Marie Newman (D-Ill.) and Sen. Dick Durbin (D-Ill.), respectively, would set it at $25 per ton initially — well within the "moderate" range outlined by the NBER paper’s authors — while increasing $10 annually. Another House bill, also co-sponsored by nearly two dozen Democrats, would begin at $15 per ton before a similar $10 annual rise.

Pat Mullane, a spokesperson from Newman’s office, said in a statement that the representative would "ensure that any new carbon-pricing studies are reviewed thoroughly and taken into account" as she pushes the legislation. "As with every piece of legislation, this bill will evolve, progress and be guided by both the scientific and economic studies on carbon pricing and through the input from experts in the field and members of Congress," Mullane said in an email.

A separate plan being pushed by the Climate Leadership Council — an industry coalition that includes oil and gas majors like Exxon Mobil Corp., automakers like General Motors Co. and Ford Motor Co., and large investor-owned utilities — would establish a $40-per-ton fee, in 2017 dollars, while increasing 5% over inflation per year (E&E Daily, April 14).

Carlton Carroll, vice president of communications at CLC, declined to address the paper’s findings directly, saying his group had not had sufficient time to review it.

But he noted that the group’s fee would start out at $43 per ton, after being adjusted for inflation — slightly above the range in which a carbon price would conflict with EVs’ emissions profile, according to the NBER paper’s authors.