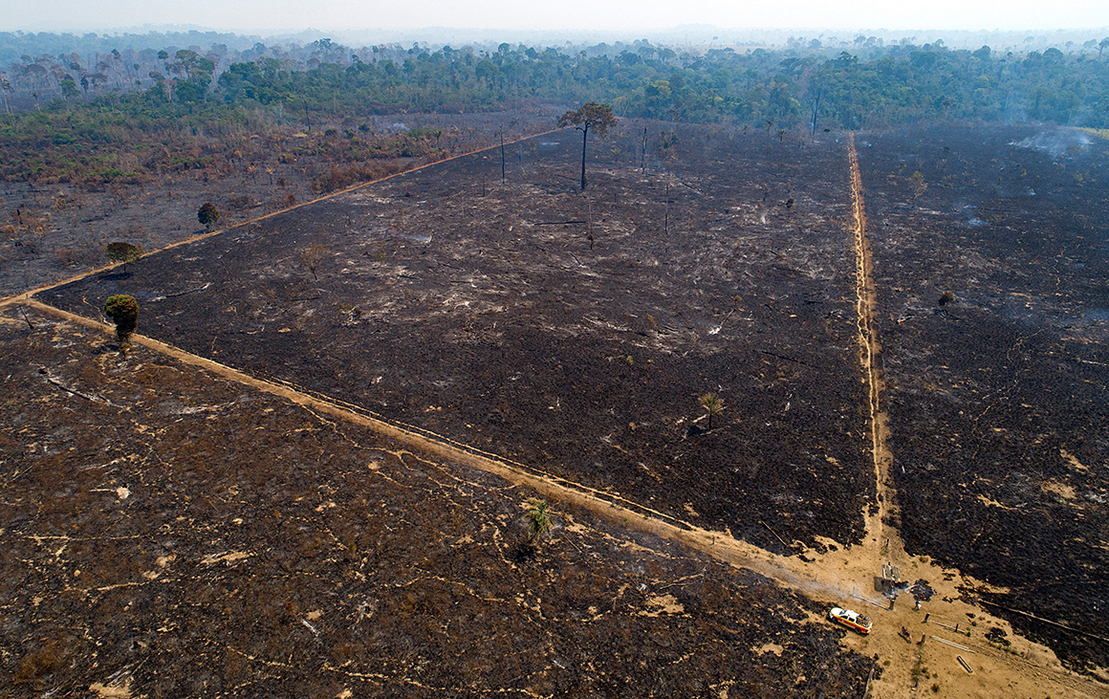 An area of the Amazon rainforest was burned to clear land near Novo Progresso, Brazil, in 2020. Scientists warned in a major climate report released yesterday that carbon removal is needed to prevent temperature rise from surpassing 1.5 degrees Celsius. AP Photo/Andre Penner

Removing carbon dioxide from the atmosphere is essential to meet the Paris Agreement’s looming climate targets, according to a major report from the United Nations’ Intergovernmental Panel on Climate Change.

It’s all but impossible to achieve net-zero carbon emissions — the key to halting global warming — without sucking massive amounts of greenhouse gases out of the atmosphere using trees, technology and other carbon sinks, the report says.

But there’s a catch.

If the world relies too heavily on carbon removal, society runs the risk of overshooting the Paris targets — and experiencing increasingly severe climate impacts.

That’s the delicate line for carbon dioxide removal, making it an often fraught topic among climate scientists, activists and policymakers.

Carbon removal is increasingly regarded as an essential tool in the arsenal against climate change. It can be achieved in a variety of ways, some more proven at large scales than others. Many landscapes, like forests and wetlands, naturally soak up carbon out of the air. There are also technological means of pulling carbon back out of the atmosphere, using special minerals or carbon-sucking machines.

But just how strongly carbon removal can — or should — be wielded is a matter of debate.

The IPCC report released yesterday digs into some of these questions. It includes an entire section on carbon dioxide removal, making it a more prominent feature of discussion than it has been in previous IPCC reports.

The report is the final installment in a three-part climate assessment from the IPCC. While the first two sections focused on the science of climate change and its effects on the planet, the last installment outlines the steps that human societies can take to cut greenhouse gas emissions and halt global warming.

The report presents a stark message to the world. Meeting the Paris Agreement’s climate targets is still technically possible — but it requires an immediate, rapid and coordinated international effort to overhaul human society on Earth (Greenwire, April 4).

Limiting global warming to 1.5 degrees Celsius, the Paris Agreement’s most ambitious target, would require global greenhouse gas emissions to fall by nearly half over the next decade. And the world would need to achieve net-zero emissions by the early 2050s.

The report explores a wide range of actions the world can take to make this happen. Emissions must fall swiftly across all sectors of human society, including energy, transportation, buildings, industry and land use.

It’s technically possible to eliminate most emissions from human activities by switching to low- or zero-carbon forms of electricity and fuel, using more sustainable forms of forestry and agriculture, conserving natural carbon sinks, and so on. But there are some difficult-to-decarbonize sectors that will, even with the best of efforts, likely have some residual emissions left over.

Offsetting these residual emissions is necessary to reach net-zero carbon, the only way to fully halt global warming. That makes carbon removal “unavoidable,” according to the new IPCC report.

But, in theory, the world could take it a step further. Instead of merely offsetting hard-to-scrub emissions, carbon removal could potentially be used to pull out more CO2 than the world is pouring in. It’s a concept known as “negative emissions” — and if successful, it could actually lower the Earth’s temperatures.

But scientists have warned for years that it’s a risky business.

For one thing, there’s still some scientific uncertainty about exactly how much carbon can be pulled out of the atmosphere using various removal strategies and technologies. Some of these strategies come with trade-offs or side effects, such as large land and water resource requirements for natural methods, or large energy requirements for technological ones.

At the same time, some policy experts have warned that relying too much on the concept of negative emissions could have a dangerous side effect. They say it could lull policymakers into the false belief that reducing emissions today is less urgent than it actually is — that they can always overshoot the Paris climate targets and bring temperatures back down later.

The second installment in the three-part IPCC series, released in February, warns of the risks associated with overshooting global temperatures. Every little bit of warming exposes the planet to worse climate impacts — and some of these effects can’t be undone by lowering temperatures after the fact. Some climate effects are irreversible.

If the planet even temporarily exceeds 1.5 C, the report states, “many human and natural systems will face additional severe risks.”

At the same time, scientists are acknowledging that at least a small level of overshoot is increasingly likely when it comes to the 1.5 C target.

In fact, it may be almost certain.

“It is almost inevitable that we will at least temporarily overshoot 1.5,” Jim Skea, an energy expert at Imperial College London and co-chair of the IPCC working group that prepared the report, said in a virtual presentation of the new report yesterday.

Exactly how much depends on how quickly greenhouse gas emissions fall over the next decade, the report notes. Scenarios compatible with low or zero overshoot — and, thus, limited reliance on negative emissions — require deeper carbon reductions between now and 2030.

In other words, the future role of carbon dioxide removal largely depends on the world’s actions over the next 10 years. Deep and rapid emissions cuts today mean less reliance on carbon removal in the future.

And the report is clear that, even though some carbon removal is necessary to reach the world’s climate goals, it “cannot serve as a substitute for deep emissions reductions.”