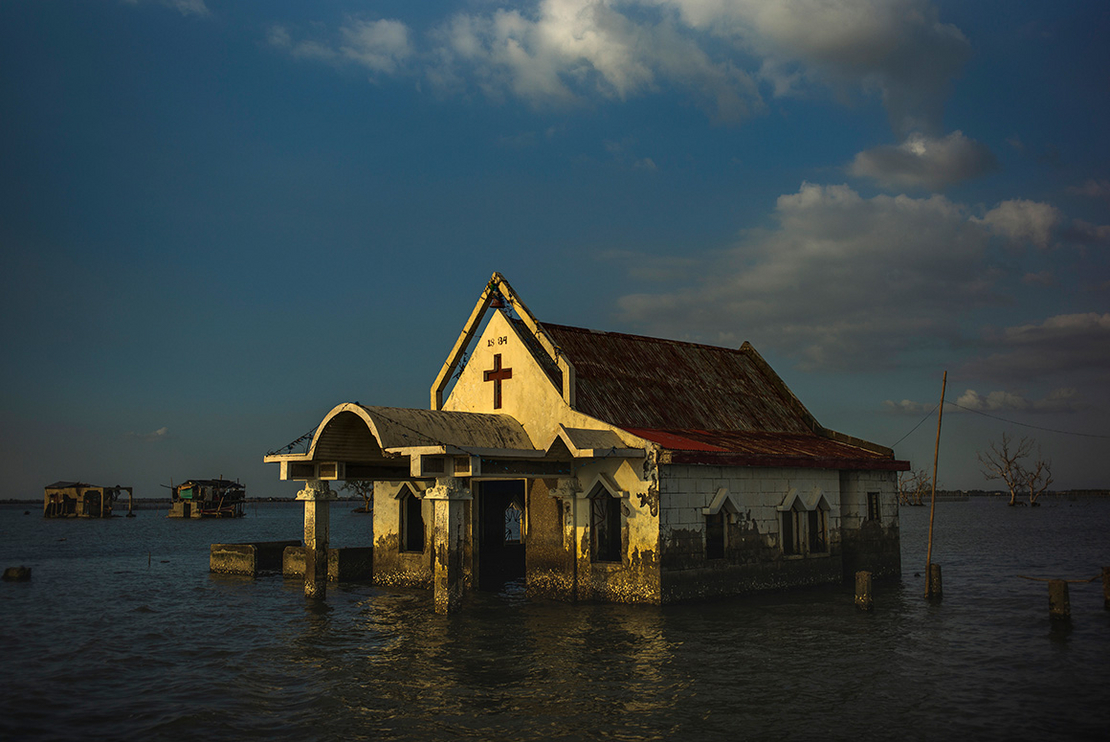 Seawater engulfs the church of Pariahan village north of Manila in the Philippines. Jes Aznar/Getty Images

For decades, the key to halting climate change has been clear: The world must reduce net greenhouse gas emissions down to zero. Now, a comprehensive new U.N. climate report summarizes years of studies from climate scientists, social scientists, economists, energy experts, policy specialists and others on how to make that happen.

Its findings are stark: Tackling climate change requires a fundamental overhaul of nearly all aspects of human life. Everything — from the ways societies produce their electricity and power their transportation to the ways they build their cities, manufacture their goods and grow their food — is part of the solution.

Meeting the goals of the 2015 Paris Climate Accords is still possible, the report notes. But it requires rapid, immediate and urgent action.

These conclusions were published today by the United Nations’ Intergovernmental Panel on Climate Change, the world’s leading authority on climate research.

“The IPCC report before us today is powerful evidence that we have the great potential to mitigate climate change,” said Hoesung Lee, chair of the IPCC, at a virtual presentation of the findings today. “We are at a crossroads. This is the time for action. We have the tools and know-how to limit warming and secure a livable future.”

The new report is the final installment in a major three-part climate assessment by the IPCC. The first two sections, published in February and August, outlined the ways the climate system is changing and how those changes are affecting the planet’s human and natural systems.

World nations are currently striving to meet the goals of the Paris climate agreement — preventing global warming of more than 2 degrees Celsius at least, or a more ambitious 1.5 degrees if at all possible. The planet has already warmed by more than 1 C, meaning both targets are swiftly approaching.

Yet to reach the Paris climate goals, global net greenhouse gas emissions must hit their peak immediately — within the next two or three years at the latest — and then begin to fall.

The carbon-cutting pledges that participating nations have submitted under the Paris Agreement so far aren’t enough to meet these targets, research has found (Climatewire, Nov. 23, 2021).

The new report makes it clear: Reducing emissions swiftly enough to meet the Paris goals is a feat requiring a colossal, coordinated international effort. Greenhouse gas emissions must fall, immediately and rapidly, across all sectors of human society. That includes energy, transportation, industry, buildings and land use.

“In every sector, there are options available that can at least halve emissions by 2030 and keep open the possibility of limiting warming to 1.5 degrees,” said Diana Ürge-Vorsatz, a scientist at Central European University and vice-chair of the IPCC working group that prepared the report.

Reducing emissions across the energy sector requires “substantial” reductions in the use of fossil fuels, the report states. That means a transition to systems dominated by renewables, with any remaining fossil fuel systems outfitted with carbon capture and storage.

To achieve 1.5 C without overshooting the target, models suggest that the global use of coal must fall by 95 percent by the year 2050. Oil must decline by about 60 percent and gas by about 45 percent. Continuing to invest in new fossil fuel infrastructure, the report warns, may “lock in” additional greenhouse gas emissions in the future.

New buildings must be designed to be carbon-neutral, and old buildings must be retrofitted, or modified, to improve their energy efficiency and decrease energy demand, as well. Nations must prioritize protecting forests and other carbon-rich natural landscapes and transitioning to sustainable forms of agriculture and forestry.

The industrial sector poses one of the biggest challenges. It’s technically possible to achieve net-zero emissions in industry, the report finds. But it will require major overhauls of production processes.

And across sectors, transforming everyday life to reduce energy demand can make a big difference. That includes everything from expanding public transportation to designing more compact, walkable cities. These kinds of demand-side interventions could help reduce emissions in end-use sectors by as much as 40 to 70 percent by 2050, the report finds.

It’s not just carbon dioxide that matters, the report adds.

Reducing other potent climate-warming gases — particularly methane — can make a big difference in slowing short-term warming. Meeting the Paris climate targets will likely require substantial reductions in methane emissions over the next couple of decades.

In all, it’s possible to eliminate the majority of the world’s greenhouse gas emissions across all sectors, the report notes. But there will still be some residual emissions from certain difficult-to-decarbonize activities. That means carbon dioxide removal — the process of sucking CO2 back out of the atmosphere — is “unavoidable” in order to achieve net-zero global emissions, it says.

That can be accomplished in a variety of ways. Natural landscapes, like forests and wetlands, soak up carbon on their own. And various forms of technology can also be used to pull carbon out of the air.

Carbon dioxide removal, in theory, could also be used to suck more carbon out of the air than the world is pouring in — a concept known as “negative emissions.” It’s a process that could effectively lower the Earth’s temperatures.

That means it’s technically possible to overshoot the Paris climate targets and then bring global temperatures back down again afterward. But it would come with risks. For one thing, there’s a great deal of scientific uncertainty about the maximum amount of negative emissions actually possible — particularly through technological interventions, many of which haven’t yet been deployed at a large scale.

And earlier installments of the IPCC report warned that overshooting the temperature targets would worsen the impacts of climate change on the planet in ways that couldn’t necessarily be reversed by bringing temperatures back down.

Some climate impacts are irreversible.

It’s increasingly likely at this point that meeting the 1.5 C target will involve a certain level of overshoot. In fact, it’s “almost inevitable,” according to Jim Skea, an energy expert at Imperial College London and co-chair of the IPCC working group that prepared the report. But lower overshoot carries fewer risks. And the faster the world succeeds in reducing greenhouse gas emissions, particularly over the next 10 years, the less likely it is to rely on high levels of negative emissions in the future.

“It’s now or never, if we want to limit global warming to 1.5C, ” Skea said in a statement. “Without immediate and deep emissions reductions across all sectors, it will be impossible.”

Making it all happen calls for a coordinated international effort, the report notes.

It not only requires stronger climate policies at the national level around the world. It also requires technological sharing among nations; increased investments in innovation, research and development; and increased financial support for developing nations from higher-income countries.

“Our assessment shows that financial flows are a factor of 3 to 6 times lower than levels needed by 2030 to limit warming to below 1.5 degrees Celsius or 2 degrees Celsius,” said Ramón Pichs-Madruga, a vice-chair of the IPCC working group. “But there is sufficient global capital available and liquidity to close investment gaps.”

The report also notes that making these investments and transitioning to a zero-carbon world don’t only benefit the climate. Transforming society in climate-friendly ways can also help advance other sustainable development goals, improving public health and social equity.

It also notes that the costs of these investments are outweighed by the economic benefits of avoiding even worse future climate impacts.

“The IPCC report is a reminder that mitigation is not about cost,” said John Kerry, U.S. special presidential envoy for climate, in a statement. “It is about investment — in our future, our children’s future, and our planet’s future. Choosing the more sustainable option is not only the right thing to do, but the IPCC has shown it is now the more affordable choice.”