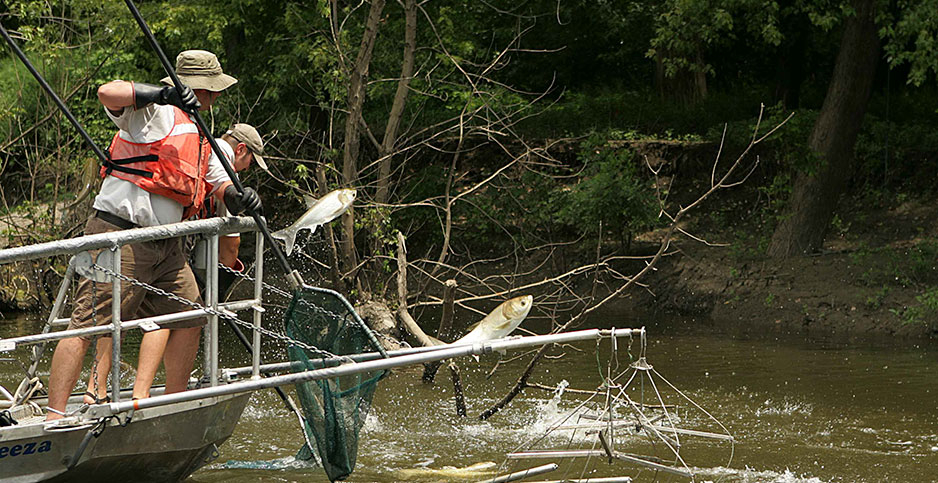 Biologists observing the spread of invasive Asian carp up the Mississippi River Basin had identified two possible barriers — one structural, one biological — that could keep the nemesis fish from invading the Great Lakes.

Climate change may nix the biological one, researchers say, meaning the only safeguard against an invasion into Lake Michigan is an $800 million fish wall proposed for the Des Plaines River near Joliet, Ill.

Presumably, the upriver-swimming fish won’t be able to pass the Army Corps of Engineers structure, which could include acoustic fish deterrents, an air bubble curtain and an electric barrier, according to a recent corps study.

One better work because the other won’t.

Experts say the "ecological barrier" is little more than a speed bump for the aggressive fish, which can grow to between 60 and 100 pounds and jump as high as 10 feet when disturbed by boat motors.

In a paper published in the journal Biological Invasions, researchers deflated a long-standing notion that two other invasive species already in Lake Michigan, zebra and quagga mussels, could outcompete Asian carp for food and make the lake less hospitable for the voracious, fast-reproducing fish.

"Our new research demonstrates that the presence of an already entrenched food competitor — the mussel — has a limited capacity to act as a barrier to a bighead and silver carp invasion, and that climate warming and nutrient enrichment could further diminish the mussels’ ability to affect Asian carp habitat," said Peter Alsip, the study’s lead author and a researcher at the University of Michigan’s Cooperative Institute for Great Lakes Research.

Climate change undermines the supposed ecological barrier in two ways, according to the researchers.

Extreme rain events associated with climate warming could increase phosphorus and nutrient loading in the lake, aiding in the formation of phytoplankton, the primary food source for carp. The tiny zebra and quagga mussels, trillions of which line the lake bottom, were thought to be potential food competitors because they, too, consume large amounts of plankton from the lake.

If nutrient inputs into Lake Michigan from farm and urban runoff increase in the future, especially during warm months, phytoplankton growth could explode near the lake’s surface where carp can feed more actively due to warmer temperatures, and where they are also known to leap into boats, making them a major nuisance to fishers and other lake users.

Quagga and zebra mussels, by contrast, feed on plankton at the bottom of the lake, a process that could be disrupted by the voracious swimming carp.

The second climate change factor involves lake stratification, when distinct water columns based on temperature form from the lake’s surface to its bottom. Warming air and water temperatures disrupt and prolong stratification, allowing carp to feed and reproduce into the fall months.

Scientists’ greatest concern for the Great Lakes is bighead and silver carp, both of which were imported from Asia for aquaculture but escaped into the Mississippi River system during floods and through accidental releases. Today, the carp are one of the greatest threats to U.S. lakes and rivers.

Stratification conditions can change for other reasons, Alsip said, but climate change is the "proximate threat," and the risk of a major carp invasion is expected to increase as climate conditions change.

Lake Michigan "is a colder and larger lake than the other systems where we’ve seen an abundance of carp, but climate warming will lower some barriers to entry."

Marc Gaden of the Great Lakes Fishery Commission, based in Ann Arbor, Mich., said the research "bursts the bubble on the thinking that zebra mussels and quagga mussels would outcompete" Asian carp, a theory he said has been advocated by some interest groups.

He called the research "data-driven and robust," and that it fills an important knowledge gap in how a proliferation of bighead and silver carp could alter the world’s largest freshwater ecosystem.

"I think it gives us and policymakers and elected officials thinking about this problem something to seriously consider," Gaden said. "There’s nothing in the Great Lakes right now that leads us to believe that Asian carp won’t find good feeding and spawning grounds. The lakes will be welcoming to these fish if they get in."

He also said it makes the need for the engineered fish barrier on the Des Plaines River imperative. Congress has not approved funding for upgrades associated with the barrier to the Army Corps’ Brandon Road Lock and Dam.

And Illinois Gov. J.B. Pritzker (D) said his state, which had initially agreed to be a nonfederal sponsor of the fish barrier, cannot afford the project in its current form.