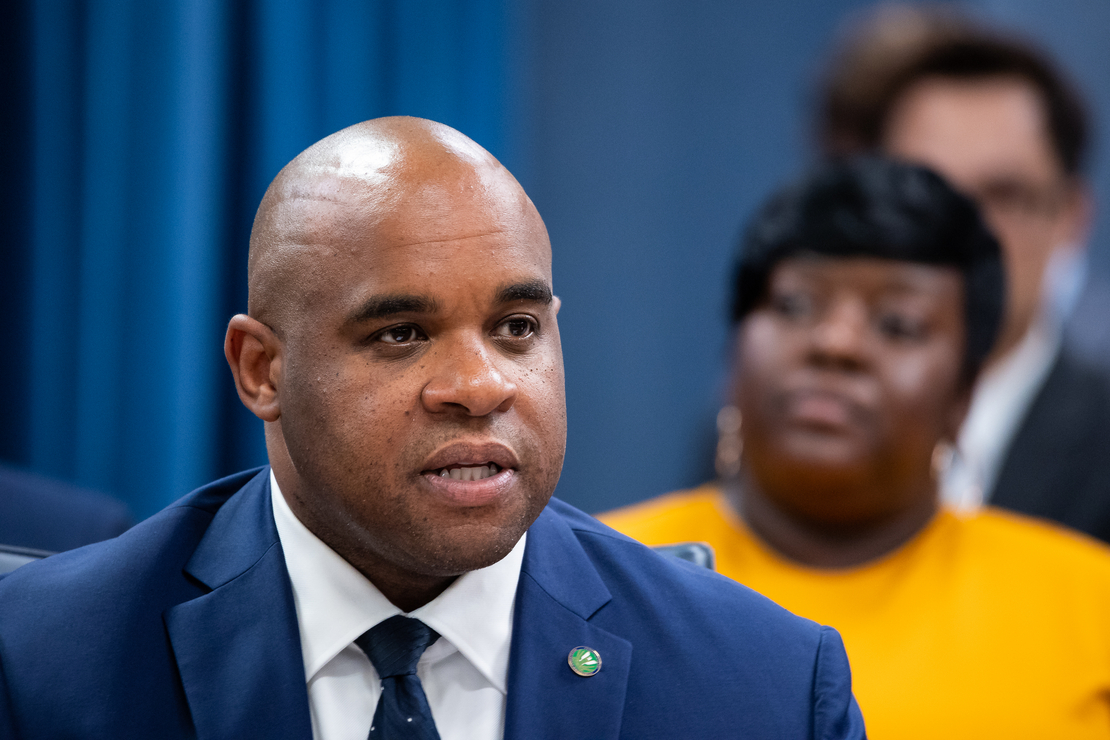 Now, those types of public squabbles may be a thing of the past as Willie Phillips settles into his new role as acting chair, a job President Joe Biden gave him this week.

Phillips will set the tone and agenda at FERC for the foreseeable future — although a new chair from outside the commission could be nominated at any time. A Democrat and self-described consensus-builder who has so far stayed above the fray, Phillips is likely to advance proposed rules aimed at more efficiently connecting new energy projects to the grid and building new long-distance power lines. Both are priorities for renewable energy advocates.

“The commission already has a lot on its plate that’s sort of open in some stage of the process, so I think there’s already quite a lot that Phillips can do in his time as chair, even just getting existing efforts across the line,” said Caitlin Marquis, a managing director at Advanced Energy United, a clean energy trade association.

That’s due in part to the current partisan makeup of the commission, with two Democrats and two Republicans, as well as the interim nature of Phillips’ role. A White House official this week said that Phillips would serve as acting chair “until we are able to nominate and confirm a permanent chair” (E&E News PM, Jan. 3).

Predictions about his tenure are also based on Phillips’ past statements and history as a commissioner. Since being sworn in as a commissioner in December 2021, Phillips has not dissented on a single commission decision.

“His natural orientation is to drive stakeholder consensus, and he’ll be very cautious to pursue reforms that divide stakeholders and are deeply contentious,” said Devin Hartman, director of energy and environmental policy at the R Street Institute, a pro-free markets think tank, as well as a former FERC staffer. “I foresee less bold action on divisive issues and more bold action on areas of stakeholder alignment.”

Phillips’ predecessor, Glick, was obligated to leave the commission at the end of last month after failing to win a confirmation hearing in the Senate. He championed what many FERC watchers viewed as an ambitious agenda focused on eliminating barriers to clean energy, improving FERC’s engagement with historically underrepresented groups and adopting more robust environmental reviews for natural gas projects.

But Glick also butted heads frequently with Danly, a Republican who sees FERC’s authority as limited, and Senate Energy and Natural Resources Chair Joe Manchin, a West Virginia Democrat who effectively ended Glick’s career at FERC by opting not to hold a confirmation hearing for him.

“Former Chairman Glick had very strong views, and I think he has a lot of integrity and believes in the mission,” said Travis Fisher, CEO of the Electricity Consumers Resource Council, a trade group for industrial users of energy. “But I think the difference is Phillips himself is just more of a centrist type.”

Phillips’ voting record at FERC last year largely aligned with Glick’s. Even so, some observers said he may not have as much of a predetermined vision for the independent commission, which oversees power markets, natural gas pipelines and other sectors of the energy industry.

“I think Chairman Phillips hasn’t really staked out certain issues and publicly pronounced, ‘These are my issues,’” said Joseph Kelliher, a former chair of FERC during the George W. Bush administration. “It’s more like he quietly works within the building.”

Representatives from Phillips’ office at FERC did not respond to a request for comment this week on his new position.

Before joining FERC and becoming the first Black chair of the federal commission, Phillips served as a commissioner, and then chair, of the District of Columbia Public Service Commission. He has also worked as an assistant general counsel at the North American Electric Reliability Corp., a not-for-profit entity regulated by FERC that develops and enforces standards to maintain a reliable electric grid.

Those jobs may have informed his stated priorities, which include ensuring that energy is reliable and affordable. He also has expressed a commitment to equity and justice, having recently traveled with Glick to the Gulf Coast of Louisiana and Texas to meet with environmental activists concerned about the development of natural gas export projects there.

“The work we do here at FERC is crucial to ensuring consumers have access to reliable, safe, secure and efficient energy services at reasonable cost,” Phillips said in a statement this week. “I look forward to continuing to work with my fellow Commissioners and the FERC staff, as well as to prioritize public engagement, in pursuit of our important mission.”

This year is expected to be another busy period for FERC, whose work intersects with efforts to expand energy supplies and transition to cleaner forms of energy.

FERC is expected in 2023 to finalize two proposals concerning how regional transmission lines are planned and paid for and the process by which new energy projects nationwide — the majority of which are solar, wind and other carbon-free resources — link up to the grid.

Changing those two processes, known as transmission planning and generator interconnection, are key for transitioning to a cleaner energy system and meeting the Biden administration’s climate and energy goals, experts say. Phillips has supported both efforts while a commissioner at FERC.

He has also expressed support for other measures that could boost clean energy.

In a statement last year, for example, Phillips said that FERC should consider adopting a new requirement to ensure that a certain amount of electricity can flow between different regions of the power grid. Such a requirement could spur the development of more interregional transmission lines, possibly making the grid more reliable and better utilizing renewable energy resources across the U.S.

“We’re encouraged by his support of some of our key priorities,” said Marquis of Advanced Energy United. “His support of the [proposed rules] on transmission and interconnection are our top priorities — making sure that the good work continues on those issues.”

Phillips has also expressed interest in protecting consumers from paying for what could be unnecessary or inefficient investments in the grid.

According to some clean energy advocates and state regulators, utilities have mostly built smaller transmission projects and upgrade projects in recent years, rather than multistate lines that could more efficiently incorporate renewable energy at a lower cost.

“I think Phillips sees the need for stricter oversight and more focus on issues that might slip between state/federal gaps,” Fisher of the Electricity Consumers Resource Council said in an email.

Still, electric utilities have mostly opposed ideas floated by the commission to increase oversight of transmission development, including the concept of a new independent transmission monitor backed by Glick and others (Energywire, May 4, 2022). And some observers are unsure as to whether Phillips would pursue measures strongly opposed by energy industries based on his actions at the D.C. Public Service Commission.

According to local environmental advocates in the District of Columbia, Phillips could have more aggressively pushed the city’s electric and gas utilities to transition away from fossil fuels while serving on the commission for a number of years (Energywire, Oct. 19, 2021).

“It would not surprise me if Phillips’ acting chairmanship is pretty well-received by the utility industry,” said Paul Patterson, an analyst at Glenrock Associates LLC. “I remember him at the D.C. PSC, and in that environment, he seemed to be pretty accommodating to utility issues.”

The Edison Electric Institute, which represents investor-owned electric utilities, and other energy industry groups have publicly congratulated Phillips on his new role.

“If anything has proven true during these first two years now of the Biden administration, it’s that the best things happen for America when we’re able to come to some consensus about finding ways forward from a bipartisan, practical standpoint,” said Fred Hutchison, CEO of LNG Allies, a nonprofit for the liquefied natural gas industry. “We think naming Phillips is a good step forward in that direction.”

If there’s one aspect of Glick’s legacy that Phillips is expected to carry on, it’s engagement with states.

Under Glick’s leadership, FERC established a first-ever joint task force with state regulators focused on electric transmission issues. As a former regulator below the federal level, Phillips has prioritized FERC’s efforts to seek buy-in from states on various issues, according to those who know him.

Over the years, Phillips has consistently emphasized “impact on customers and impact on reliability,” said Kent Chandler, chair of the Kentucky Public Service Commission.

Chandler, who has worked with Phillips through the National Association of Regulatory Utility Commissioners and in other capacities, said Phillips sought input and support from others prior to making decisions.

“I expect that quality will be on display at FERC now, and may help continue the significant relationship between FERC and state regulators Chair Glick began,” Chandler said in an email.

How long Phillips leads the agency is an open question. By designating Phillips as chair on an interim basis, the White House could be gearing up to nominate a fifth member of FERC as “the presumptive chairman,” said Mike McKenna, an energy lobbyist who served in the Trump White House.

“That guarantees that nominee will be subject to lots of special scrutiny by the Senate,” McKenna said in an email.