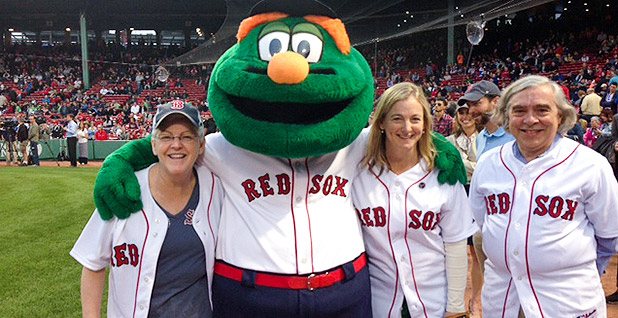 Gina McCarthy was a little star-struck.

In April 2015, the then-U.S. EPA administrator had snagged a photo with singer-songwriter Amy Grant at the White House.

"Picture of me with Amy Grant at a WH prayer breakfast," McCarthy emailed her husband, Ken McCarey.

That small exchange was one of several that make up 141 pages of McCarthy’s personal emails used for agency business, released in response to an E&E News Freedom of Information Act request filed more than 16 months ago. The emails don’t reveal much other than a Cabinet-level official staying on top of her schedule and talking points while keeping her family in the loop.

During her tenure at EPA, McCarthy would often ask McCarey to print out EPA documents like memos and speeches so she could work on them at home. "For printing only," she said in one email regarding remarks she planned to give at the Center for American Progress, a liberal think tank.

It appears many of the emails released by EPA, filled with redactions, were McCarthy using one of her EPA accounts to message her husband at his personal email address.

McCarthy’s email practices came under scrutiny from Capitol Hill when she was administrator.

Ann Dunkin, then-EPA’s chief information officer, said in a May 2016 letter to Sen. Ron Johnson (R-Wis.), chairman of the Senate Homeland Security and Governmental Affairs Committee, that McCarthy and other senior staff had used personal email for official business. Dunkin said the EPA chief had used private email for printing records, which is evidenced in the records released to E&E News (Greenwire, Aug. 17, 2016).

That practice is meant to make sure government emails are maintained under federal record-keeping and transparency laws.

Emails were a headache for the Obama EPA and the rest of the prior administration.

McCarthy’s predecessor, Lisa Jackson, was criticized for using a secondary account under the name "Richard Windsor." Energy Secretary Ernest Moniz was threatened with a congressional subpoena before disclosing information on his use of a Massachusetts Institute of Technology email account (Greenwire, April 22, 2016). And of course Hillary Clinton, the 2016 Democratic presidential nominee, was bogged down during last year’s campaign over her use of a private email server as secretary of State.

Several of McCarthy’s personal emails were logistical in nature, often looping in her husband on where to be and when. Matt Fritz, McCarthy’s chief of staff, emailed both the administrator and her spouse precise instructions for McCarthy’s first pitch at Fenway Park, the home of her favorite team, the Boston Red Sox.

The emails also show McCarthy’s awe of the perks of being a Cabinet-level official.

"Not such a great photo but the flight on Air Force One was amazing," she said in one email to McCarey.

In another email, she shared a selfie from one of President Obama’s State of the Union speeches so she wouldn’t lose the memory.

"Snow days are really fun even if you’re not in school," McCarthy said.

The emails released by EPA also show the contrast between the Obama and Trump administrations at the agency. In one email sent to aides on her secondary account, McCarthy praises EPA’s work on the effluent limitations guidelines, or "ELG," which curbs the release of heavy metals in wastewater from power plants.

"The coverage of the rule is fabulous. It is gratifying," she said, noting the "positive statements from [the Environmental Integrity Project] and [the] Sierra [Club] and little pushback from the industry."

Pruitt has had email troubles of his own.

Trump’s EPA chief had to clarify his confirmation hearing testimony on his use of personal email while he was Oklahoma attorney general. He sent a letter in May to members of the Senate Environment and Public Works Committee that he had indeed used private email for work as a state official despite his earlier testimony.

Pruitt said after "a complete and exhaustive review of my personal email account was undertaken," it appeared some private emails were for official business.

"Based on this exhaustive review, I have determined that a small portion of those emails may relate to state business as that term is understood either generically or under Oklahoma’s Open Records Act," Pruitt said in the letter (Greenwire, May 6).

Pruitt was also forced to turn over some of his emails from his time as Oklahoma attorney general in response to a watchdog group’s lawsuit earlier this year.

A state district judge sided with the group, the Center for Media and Democracy, and ordered the attorney general’s office to turn over more than 3,000 pages of material. The court released one batch of email, which showed a pattern of cooperation with fossil fuel companies, but the attorney general’s office appealed to the Oklahoma Supreme Court to block the release of the rest (Energywire, March 1).

The state Supreme Court has assigned the appeal to a midlevel appellate court, which hasn’t issued a ruling, court records show. Meanwhile, the district court in Oklahoma City is scheduled to hold a hearing Jan. 30 next year to determine how to proceed with the underlying case.

In his letter clarifying his Senate testimony, Pruitt said EPA maintains a primary email account for him, [email protected] He also said EPA staff had established secondary accounts for his schedule and communications.

In a subsequent letter obtained by E&E News, Pruitt reiterated those points regarding his primary and secondary email accounts at EPA. But he also said he makes sure to forward any personal email used for work onto official accounts, in accordance with EPA policy.

"It is my practice to use my official email accounts to conduct EPA business," Pruitt said in the Nov. 29 letter sent to Sen. Tom Carper (D-Del.), ranking member on the EPW committee.

"However, to the extent that any arguably work related emails reach my personal account, I forward those communications to official accounts pursuant to EPA policies."

E&E News today filed a FOIA request for any of those personal emails that Pruitt has used for EPA business during his time as administrator so far.

Others have been interested in if Pruitt and other political appointees have used personal email for work.

In September, the House Oversight and Government Reform Committee sent letters to the White House and 24 federal agencies, including EPA, asking about their officials’ use of private email for official purposes. By October, Rep. Trey Gowdy (R-S.C.), the panel’s chairman, told Pruitt in a letter that EPA had "not yet fully complied" with his committee’s request (E&E Daily, Oct. 23).

A committee spokeswoman told E&E News today that she believed EPA had now complied with the panel’s request regarding personal emails, although she was unable to share EPA’s response.