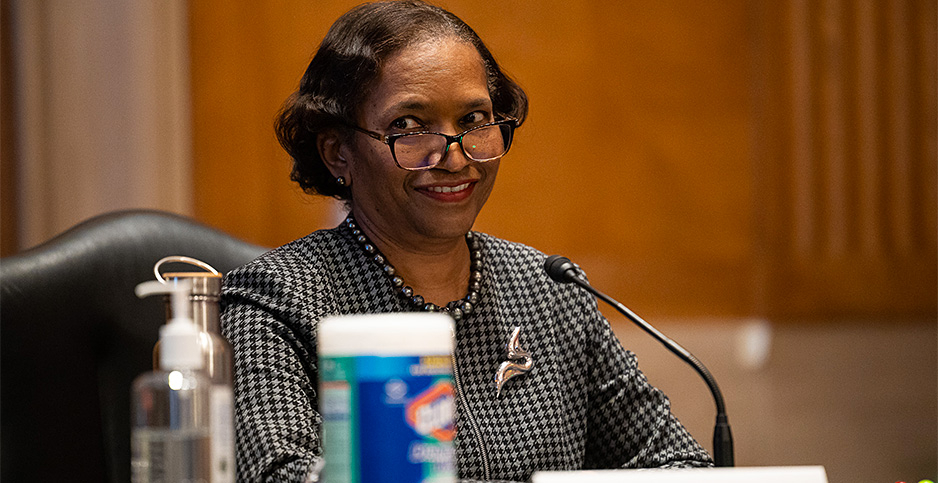 The president’s top environmental adviser said today that she is laser-focused on addressing planet-warming emissions while preserving some stability for regulated industries.

Brenda Mallory, chair of the White House Council on Environmental Quality, told an audience of lawyers this morning that she is aware of — and sympathetic to — the concerns of business owners who have been trying to navigate environment and energy rules during the “seismic shift” in policy direction that occurred between the Trump and Biden administrations.

“I know that some of you and many of your clients would like to see the era of ping-ponging policy come to an end, and I share that view,” Mallory said during the keynote address for the fall meeting of the American Bar Association’s Section of Environment, Energy and Resources. “Ultimately, we want something that will provide a level of predictability for policymakers, businesses and attorneys, and be sustainable in the courts.

“I understand the problems that a lack of predictability can cause,” she continued. “And I know that concerns about this are legitimate.”

CEQ will play a key role in carrying out President Biden’s climate agenda as the agency considers how it plans to unravel Trump-era changes to National Environmental Policy Act rules that govern permitting of pipelines, highways and other projects.

The proposed NEPA implementing rule includes a requirement that federal agencies evaluate all environmental impacts of their decisions, including “cumulative” effects to the climate and to low-income and minority communities (Greenwire, Oct. 6).

CEQ is currently accepting public comment on the proposal. Mallory said today that she wants to hear solutions for the Biden administration to ensure stronger environmental reviews while avoiding permitting bottlenecks.

Mallory, who worked as an attorney for the Southern Environmental Law Center during the Trump administration, said the killing of George Floyd at the hands of police officers last year left her with a “strong desire” to address institutional inequities for people and communities of color — both in the environmental realm and in other arenas.

She advised lawyers who are working on projects in environmental justice communities to check in with locals “early and often” on how a planned project or facility would affect the neighborhood where it is sited.

Mallory said she is aware that the Biden administration’s climate targets — such as his goal to slash greenhouse gas emissions in half from 2005 levels by 2030 — are extremely ambitious.

She encouraged her audience to think about the path to reaching those goals as a journey: “Sometimes it goes smooth and full speed ahead, and sometimes there are bumps here and there.”

Mallory added: “What would be most helpful is that people come to the issues and partner with us in ways that sort of recognize that.”