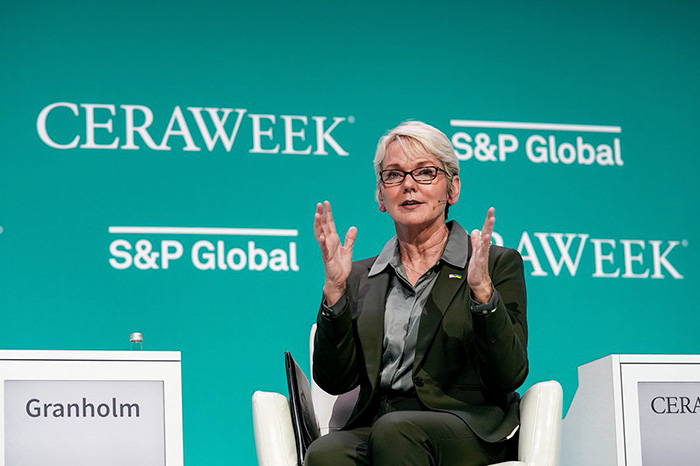 HOUSTON — Energy Secretary Jennifer Granholm delivered a simple message yesterday in the nation’s oil and gas capital: Boost production even as the U.S. aims to deploy alternatives to fossil fuels “as fast as possible.”

Granholm said the U.S. stands ready to help Europe, where oil and gas prices have skyrocketed in the face of Russia’s invasion of Ukraine, underscoring the Biden administration’s message that it would not be “financing Vladimir Putin’s war.”

Earlier this week, President Biden banned imports of Russian crude oil and natural gas after facing pressure to act from lawmakers of both parties (Greenwire, March 8).

The U.S. is already exporting 12 billion cubic feet of liquefied natural gas, or LNG, a day mostly to Europe, and total exports could grow by 4 billion cubic feet a day by 2024, Granholm said at the CERAWeek by S&P Global conference here.

“Clearly LNG is a big part of this equation,” Granholm said. “We have got to do our part to ensure that others are not hurting.”

Granholm asserted that “we are on a war footing — an emergency — and we have to responsibly increase short-term supply where we can right now to stabilize the market and to minimize harm to American families.”

“That means releases from strategic reserves across the world, like we’ve done. And that means you producing more right now, where and if you can,” she continued.

Ensuring an adequate supply of energy to Europe has been on the administration’s mind for months. It also presents a potential business opportunity for the U.S. LNG industry (Energywire, March 9).

Amid rising tensions in January, Biden and European Commission President Ursula von der Leyen said in a statement that LNG “in the short-term can enhance security of supply while we continue to enable the transition to net zero emissions.”

Russia provides about 35 percent of Europe’s natural gas. So far, Russia hasn’t cut off shipments to Europe, and the international sanctions against Russia have steered clear of that country’s gas exports.

Even so, gas prices on the continent yesterday were roughly double the level before the war, out of concern that more energy sanctions could happen as the war drags on, the Norwegian data firm Rystad Energy said in a research note.

Businesses in Europe are already beginning to shut down industrial production because of high natural gas prices, Rystad Vice President Sindre Knutsson wrote, citing a fertilizer maker that is curtailing its operations in France and Italy.

“This marks the first major announcement of industrial demand destruction, and others may follow suit if prices persist at their current exorbitant levels,” Knutsson wrote.

Charlie Riedl, executive director of the Center for Liquefied Natural Gas, also said there have been “significant signals coming out of Europe that have indicated their desire to move from reliance on Russian-sourced natural gas.”

He said the Biden administration and future ones will be “hard-pressed to walk away from … the expected volumes that will be needed to offset Russian supply of gas, not only to Europe, but around the rest of the world.”

Environmental groups, however, pushed for a move away from fossil fuels after Granholm’s appearance in Houston. They’ve also raised concerns about increased pollution from LNG export terminals in overburdened communities.

“To achieve true energy independence, we must rapidly transition to affordable clean energy, not double down on risky fossil fuels,” Mahyar Sorour, deputy legislative director for Beyond Dirty Fuels at the Sierra Club, said in a statement yesterday.

Granholm’s remarks came as gas exporters said there is little they can do in the short term to get more fuel to Europe.

Historically, 70 percent of U.S. LNG exports have gone to Asia, but the price spike has changed the flow and now 65 percent of cargoes are going to Europe, said Michael Smith, CEO of Freeport LNG.

“In the short term, all you can do is offer a higher price than your competitor,” Smith said. “There’s just not that much more coming online.”

The government cannot direct where LNG cargoes go, although many are going to Europe at the moment because of high prices there, said Charif Souki, executive chair of the board of directors at Tellurian Inc.

“It is going to be ugly for a two- or three-year period,” he said. “There’s a structural energy deficit that’s been 10 years in the making and is not going to be unmade in a few weeks.”

Tellurian is currently developing the Driftwood LNG project near Lake Charles, La., which would produce up to 27.6 million metric tons per year of LNG for export once completed. Authorized by the Federal Energy Regulatory Commission in 2019, construction of the facility — which will take about six or seven years — is expected to start next month, Souki said.

Challenges in construction processes and in the market, including with securing financing for projects like Driftwood, are holding back LNG’s potential, Souki said. There needs to be greater “accountability” in the permitting process for energy projects to ensure that federal permits that could take a few weeks to process don’t lag for many months, he said.

The government could also do more to promote construction of LNG projects that have already been permitted, especially now that Russia has “taken itself out of the picture” when it comes to its gas supplies, according to Souki.

Permitting reforms are “definitely on the agenda” for the Biden administration, Granholm said, generating a rare round of applause from the CERAWeek audience of energy industry leaders. Beyond natural gas projects, regulatory delays are slowing down geothermal projects and other types of renewable energy, she said.

“We’ve got to do a whole-of-government approach to collapse the bureaucracy associated with getting new kinds of things,” Granholm said.

In addition to calling for increased oil and gas production, Granholm said efforts to address climate change cannot be put aside because of ongoing energy and national security crises.

Hours before her speech, Granholm met with energy ministers from Canada, Norway, Qatar and Saudi Arabia for the first meeting of the Net-Zero Producers Forum, a voluntary coalition of oil-producing countries working to reduce greenhouse gas emissions. The initiative was first announced last April.

The oil and gas industry needs to work with DOE to help bring down the costs of alternatives to fossil fuels, including carbon-free hydrogen, as well as carbon capture technologies that could stop the release of climate-warming emissions, Granholm said.

DOE is flush with cash from the bipartisan infrastructure bill, and most of that funding will be doled out through competitive grants for various clean energy technologies, she said.

“We want all of these technologies that many of you are interested in,” she said. “We want to be a partner in bringing down the costs and taking them to scale.”

Granholm’s comments echoed sentiments raised by industry leaders, academics and other DOE officials during the CERAWeek conference, which this year included a number of sessions focused on hydrogen, electric vehicles, nuclear energy and other low-carbon technologies.

In an interview this week, Vanessa Chan, DOE’s chief commercialization officer and director of the Office of Technology Transitions, said the U.S. could achieve the emissions reductions goals set by the Biden administration if there is “activation of the private sector.”

“A lot of what my office is focused on is how can we connect with the private sector,” Chan said.

Last year, the Biden administration set a goal to cut greenhouse gas emissions in half by 2030, although some observers are unsure if that goal remains within reach without the passage of federal climate legislation (Climatewire, Feb. 18).

At CERAWeek, some industry leaders were more confident than others about how soon technologies like “green” hydrogen could take off on a broad scale. Green hydrogen, which is produced using power from renewable energy, could replace natural gas used in industrial processes and heating in the future.

But the process for making green hydrogen is currently more expensive than traditional, fossil fuel-based forms of hydrogen production.

“I think it’s worth looking at longer term, but we have to be realistic,” said Jim Fitterling, CEO of Dow Inc., the chemical company.