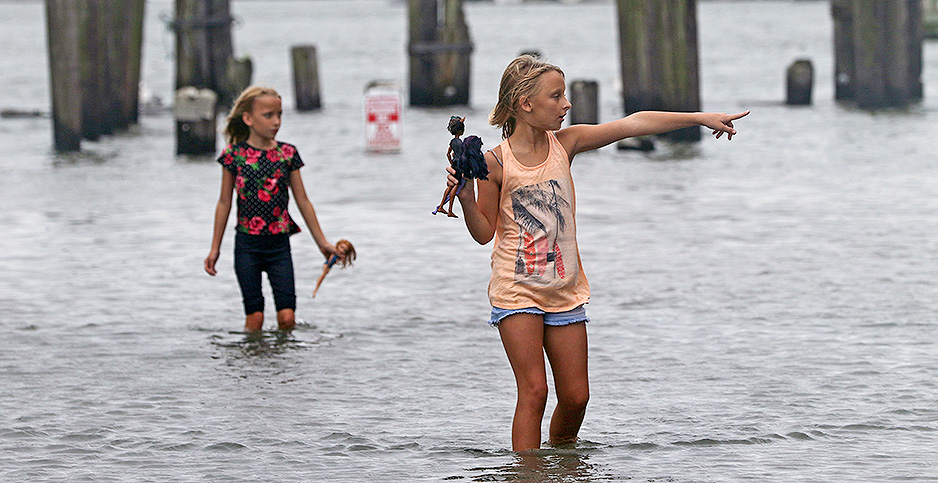 Municipalities are beginning to use resilience bonds, a new form of financing, to strengthen infrastructure against climate impacts. Flooding in Hampton, Va., is pictured in 2018. Aileen Devlin/Virginia Sea Grant/Flickr

Hampton, Va., has a climate problem bigger than it can afford. Private investors may help close the gap.

The coastal city of 135,000 — at the mouth of Chesapeake Bay and the center of the 1.7-million-population Hampton Roads metropolitan area — is a poster child of climate risk.

But the 410-year-old city, whose motto is "First from the sea, first to the stars," isn’t going under without a fight. Its ammunition is an "environmental impact bond," a private-sector finance instrument designed to tap the nation’s $3.8 trillion municipal bond market to help cities like Hampton reduce climate risk using green solutions.

"These are massive [climate] changes headed to cities across the country," said Eric Letsinger, founder and chief executive of Quantified Ventures, a consulting firm and leader in environmental impact bonds, or EIBs, that align financial interests with health, social and environmental concerns.

To date, only a handful of cities have used EIBs. The first was issued in 2016 by Washington, D.C., to help meet federally mandated combined sewer system upgrades. The $25 million bond was backed by the investment bank Goldman Sachs and the Calvert Foundation.

Unlike conventional "green bonds," which have exploded into a nearly $40 billion market in the United States, EIBs require that green infrastructure projects meet scientifically derived benchmarks and undergo regular monitoring to ensure expected benefits are met.

If it works, an EIB can create a virtuous cycle of investment and returns.

A project that performs as expected, for example, would earn a return on investment (ROI) similar to that of a standard municipal bond, Letsinger said. One that achieves greater-than-expected benefits could increase ROI by several percentage points, while a failed project could reduce ROI as low as 0%.

"It’s all about shifting early-stage risk to investors, then rewarding them when their money is well spent," said Letsinger, whose firm is helping Hampton develop an EIB proposal similar to those in Washington and Atlanta. The dollar amount of Hampton’s EIB remains under wraps, but one official said it would be in "the millions to tens of millions of dollars."

Hampton’s path to the EIB market followed years of storms and other disasters. Hurricane Isabel in 2003 was an initial catalyst for action, followed by other unnamed but powerful storms that redefined the way the city viewed its relationship to the Chesapeake Bay.

Under a citywide effort known as Resilient Hampton, officials have reconfigured landscapes and stormwater infrastructure to withstand stronger Atlantic storms, heavier rain events and as much as 18 inches of sea-level rise by 2050.

"We are dealing with water where we did not plan for it to be," said Ann Phillips, a senior climate change adviser to Gov. Ralph Northam (D), to members of Congress last year. "We are not simply preparing. We are living with water now."

"Living with water" is more than a catchphrase in Hampton and the greater Hampton Roads area. Six neighboring communities — including Norfolk, Portsmouth, Newport News and Virginia Beach — are similarly threatened by climate change.

The "living with water" concept emerged from a 2015 planning process called "Dutch Dialogues: Virginia," which drew upon experts and experience from the Netherlands and New Orleans, where the Dutch-pioneered land-use approach took root after Hurricane Katrina.

"The work that the city of Hampton has done so far is really imaginative and forward-looking," said Lee Epstein, lands program director and special counsel at the Chesapeake Bay Foundation, which is providing technical support to the EIB effort.

"They’re really exploring how to live with water and approach this problem in a different way," Epstein said. "The EIB is one avenue, but it’s not the only one."

Hampton also has hired the landscape architecture firm Waggonner & Ball, whose nature-based water management ideas — such as the Mirabeau Water Garden in New Orleans — have been recognized for their innovative use of underutilized urban space (Climatewire, Jan. 7).

"Once we catch the water, where do we want it to go?" J. David Waggonner, the firm’s principal, asked participants at a recent public meeting in Hampton, according to the Daily Press newspaper. "You have an asset we have to learn how to use."

One of the three projects being eyed for EIB financing is a comprehensive overhaul of the city’s Newmarket Creek watershed, which cuts through some of Hampton’s lowest neighborhoods and chronically floods from tidal inundation and stormwater runoff. The city also wants to construct a linear park, pedestrian walkway and natural water storage area along a drainage corridor known as Big Bethel Road.

"These drainage ditches are eyesores that are easily overwhelmed and cause a lot of flash flooding," said Jason Lee, Quantified Ventures’ project manager for the Resilient Hampton initiative. "Under this concept, they become community assets."

Epstein said the Hampton EIB initiative aligns well with the goals of the Chesapeake Bay Foundation, which has worked with hundreds of communities throughout the Chesapeake watershed on pollution reduction and stormwater management.

In addition to the Hampton bond, the foundation also is helping Baltimore secure a $6.2 million EIB to construct more than 100 water retention projects, remove impervious surface and restore natural streambanks to slow runoff and filter pollution.

"This is not a magic wand, and it’s not for every city," Epstein said. "But for those who find it useful, it’s another arrow in the quiver to help finance infrastructure that can be very costly."