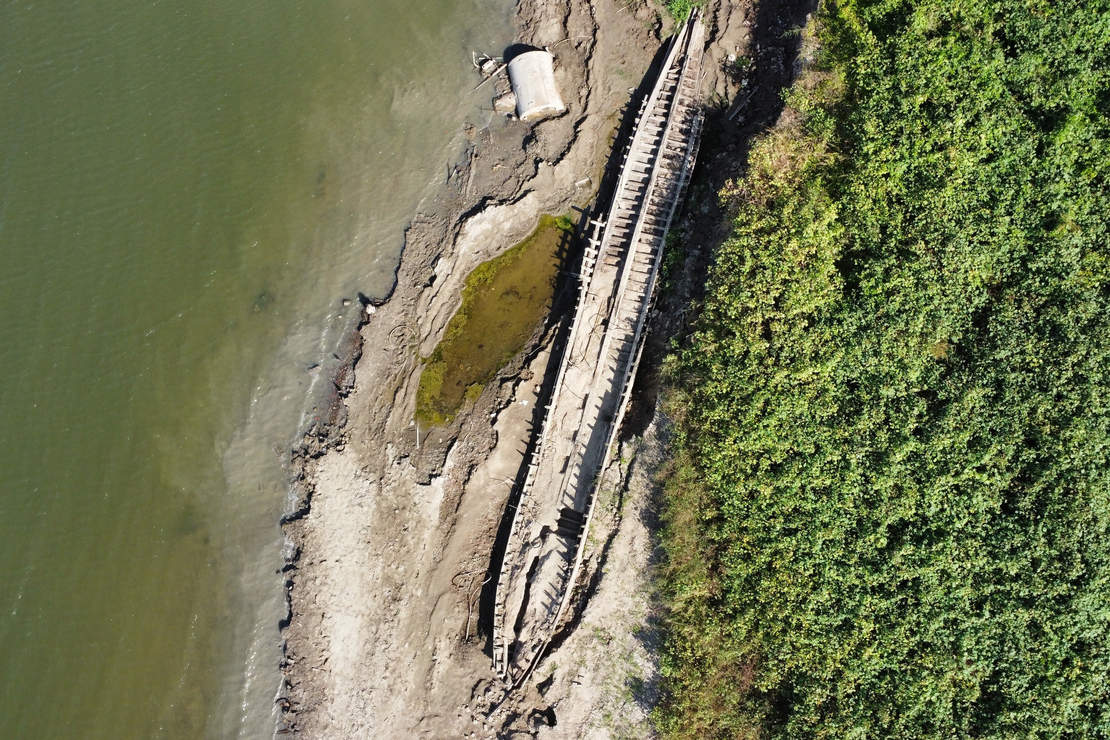 A shipwreck was exposed Oct. 18 along the banks of the Mississippi River in Baton Rouge, La. Archaeologists believe the ship is a ferry that was built in the late 1800s or early 1900s and sunk in 1915. AP

Climate change is putting pressure on one of science’s earliest fields of discovery: archaeology.

Drought in the Colorado River basin is re-exposing centuries-old artifacts as lakes and rivers become mudflats. And where droughts aren’t happening, floods are — sometimes in quick succession with drought.

Consider the Mississippi River basin. Two and a half years ago, the basin experienced record-high flooding that devastated riverbanks and adjacent land loaded with artifacts dating to Mississippian civilization. Today, the river is so dry, shipwrecks are popping up from watery graves, including in the Lower Mississippi where Spanish conquistadors arrived in the 16th century, followed by French explorers who plied the river while claiming the region for King Louis XIV, calling it “Louisiane.”

“The pattern seems to be that we’re swinging wildly from one spectrum to the other. In the long run, that’s not good for archaeology,” said Charles McGimsey, the Louisiana state archaeologist. “Archaeological sites do best either staying underwater water or staying on dry ground. Going back and forth is not good.”

Yet as more artifacts turn up — from Mesopotamia to the Mississippi — scientists say drought and other climate change impacts are undermining their ability to protect and document important sites before they degrade or disappear.

Record flooding across the Nile River basin in 2020 came perilously close to damaging al-Bajrawiya in Sudan, the heart of the ancient Kush Kingdom and a United Nations-designated World Heritage Site, according to reports from Agence France-Presse.

In Iraq, ancient structures, including in Babylon, the capital of two Babylonian Empires, are beginning to erode as salt concentrations associated with drying riverbeds and eventually saltwater intrusion begin breaking down their clay foundations, according to reporting from the Guardian.

In August, as extreme drought gripped Europe, a flotilla of World War II-era German warships sunk in the Danube River in Serbia emerged from the water. In central Spain, receding water in the Valdecanas reservoir exposed Bronze Age granite stones known as the Dolmen of Guadalperal, according to Reuters news service.

Climate risks to cultural artifacts is also a growing concern in the United States as more sites are damaged by climate extremes, both inland and coastal.

“Certainly, all archaeologists are worried about climate impacts,” said Tim Pauketat, a professor of anthropology at the University of Illinois Champaign-Urbana and the Illinois state archaeologist.

Pauketat, who has studied what’s believed to be one of North America’s most intact pre-European settlement sites at Cahokia near modern-day St. Louis, said climate change has accelerated long-standing fears among archaeologists that many of the world’s undiscovered historic and prehistoric objects are disappearing one fossil, primitive tool or pottery shard at a time.

The National Park Service, which manages 85 million acres of culturally or naturally significant areas, has cataloged nearly 150,000 archaeological sites. The agency has a dedicated archaeologist in its climate change response program to coordinate staff and studies on topics that “range from coastal erosion and storm damage to effects of wildfires, floods, melting permafrost, and deterioration due to changing rain and temperature patterns,” officials said.

The Bureau of Land Management — while less directly involved in archaeological studies — issues cultural resource permits that allow individuals or organizations to conduct field research on BLM lands. The agency also has strengthened its climate commitments, noting on its website that its multiple-use mission for conservation, recreation and commercial use of BLM and is directly threatened by climate change.

Dave Conlin, an archaeologist and chief of the National Park Service’s Submerged Resources Center in Colorado, said the exposure of cultural artifacts due to climate change — particularly in aquatic settings — is damaging for two reasons.

“One is they experience wet-and-dry cycling” that makes preserved items brittle, a problem compounded by waves and swings in hot and cold surface air temperatures. The other is exposure to humans who are invariably drawn to curious objects jutting from a riverbank or rising above the water’s surface, he said.

“For terrestrial sites, seeing them might entail an extensive hike into the backcountry where things are more hidden and can be harder to access,” Conlin added. Whereas archaeological sites in dry lakes and rivers “can easily be accessed by people on a pontoon boat.”

Lake boats are popping up as well. Earlier this year, a Higgins landing craft like those used by U.S. and allied forces storming France’s Normandy Beach on D-Day emerged on the reservoir’s shore. Experts say it was used as a survey vessel during the reservoir’s filling. Pre-drought, the landing craft was roughly 185 feet under the lake’s surface.

McGimsey, the Louisiana state archaeologist who recently verified the finding of a late 19th century river ferry near the east bank levee of the Mississippi River at Baton Rouge, said the vessel, while not as old as other shipwrecks in the channel, represents a unique era in Louisiana history when the river was still used largely for agriculture and transportation.

Because of its proximity to the levee, locals and tourists are being allowed to approach and even touch the wreckage, something that wouldn’t be allowed under other circumstances.

“There are records that indicate literally hundreds of ships sank in the Mississippi during European times,” McGimsey said. “I certainly expect more to turn up if the river keeps dropping, and we’ll do our best to get out there and record them.”