Climate change killed the home of the future 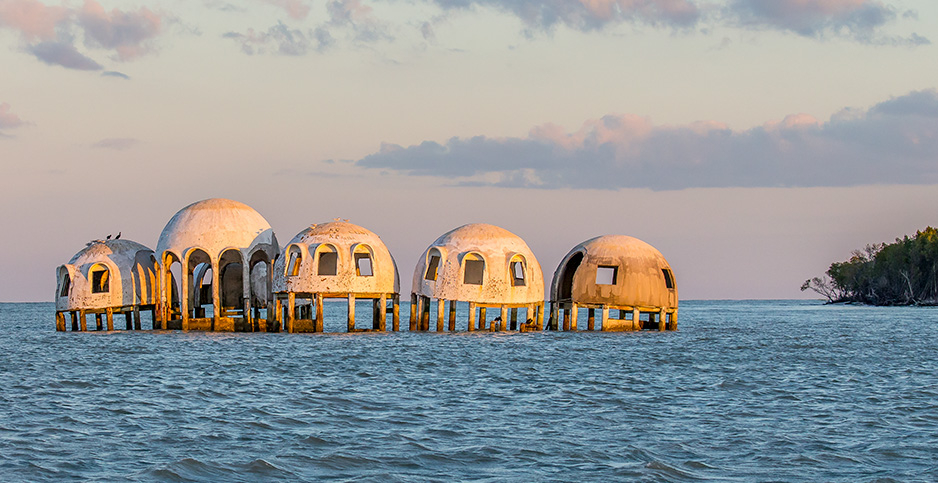 This dome home off Marco Island, Fla., was designed in the 1980s to confront the environmental challenges of the future. Its creators failed to factor in sea-level rise. Andy Morffew/Flickr

Bob and Margaret Lee were considered Florida futurists in 1980 when they built one of the most unusual houses in Collier County, a geodesic "dome home" on the tip of Marco Island along the Gulf Coast.

The 2,400-square-foot home was an architectural and engineering marvel, equipped with solar panels and rainwater cisterns, painted white to reflect the sun, and built strong enough to withstand the worst the sea could deliver.

Today, the "Cape Romano dome home" is an ocean ruin, a white tomb in a sea of green water. Four of its six geodesic domes rise above the water. Some are tagged with graffiti; others are stained by pelican excrement.

The Lees left after Hurricane Andrew in 1992. Few good things have happened to the property since.

At its core, the submerged home is a monument to climate change, the effects of which are being hard felt in southwest Florida as hurricanes, sea-level rise and daily wave action scour away the state’s fragile coastline.

"This is a clear sign of things to come, particularly in low-lying areas that are not protected," said Jayantha Obeysekera, research professor and director of the Sea Level Solutions Center at Florida International University. "It demonstrates the power of the ocean, and I think it’s a very telling example of how climate change and sea-level rise will affect us in the future."

Future storms, combined with a projected 1- to 2-foot rise in sea level over the next several decades, will eventually collapse the home onto the seafloor, experts say. In the interim, regulators are trying to figure out what to do with its concrete skeleton and protruding white domes that look like floating mushrooms.

The Florida Department of Environmental Protection, which took ownership of the dome home’s subsurface area last year from Collier County, would like it gone soon. It’s an eyesore and an unwelcome intruder on the Rookery Bay National Estuarine Research Reserve, one of the last undisturbed mangrove estuaries in North America.

"Due to erosion, the structures below the mean high-water line are located on sovereign lands," DEP spokesman Weesam Khoury confirmed in an email. "These lands are owned by the state. However, the structures themselves are still in private ownership."

The home’s current owner, John Tosto, tried to negotiate a solution. In 2016, he proposed to remove the visible domes and turn the structures into diving and fish reefs, according to a recent story in the Naples Daily News. But locals didn’t like the idea. They liked the look of the domes.

Hurricane Irma arrived the following year, and dreams of reviving the domes became even more remote.

Now, no one knows what to do with the remnants of a half-submerged showplace home that has no value beyond its tourist appeal and being an artificial reef for fish. Local guides take sightseers several hundred feet offshore to see what Atlas Obscura calls "a complex of stilted concrete igloos slowly being reclaimed by the sea."

DEP’s Division of State Lands "has not made a determination regarding the future of these structures," Khoury said.

A review of the property’s history from 1980 to 2005, when it began going seaward, suggests the dome home’s fate was sealed by a string of unwise and illegal actions, blind optimism by the home’s original and subsequent owners, and unceremonious abandonment as forces of nature undermined the structure.

Jeff Letourneau, investigations manager for the Collier County code enforcement office, said the home drew regulators’ attention around 2005 after it began creeping toward the Gulf of Mexico in the wake of Hurricane Wilma. Two of the home’s six geodesic domes were destroyed by Irma in 2017.

"We have a lot of cases that are pretty old where people build stuff and they get caught because they didn’t have a permit," he said. "A lot of times, they don’t have the money to bring it up to code, so they just let it go."

In this case, the owner let it go several hundred feet into the Gulf of Mexico, where nearshore water depths range from 20 to 40 feet.

"When we started looking at it in 2005, they were way up on the beach," Letourneau said. "By 2008, they were getting real close [to the water]. Then it just slowly morphed into the ocean."

Meanwhile, Tosto remains subject to fines of $250 per day until the issue is resolved, an unpaid sum that today exceeds more than $900,000, according to Collier County records. Beyond its unsightliness, officials are also concerned the domes could become a navigation hazard as they go farther underwater.

Part of the reason the dome home refuses to disappear could, ironically, be the resilience of the structure itself.

Mickey Lukens, a nationally known geodesic home designer and builder from Avon Park, Fla., said one of the primary benefits of dome construction is that a dome home can withstand powerful storm surges and 300-mph winds so long as it’s built the right way and in the right place.

While not familiar with the Cape Romano dome home, Lukens said its fate had little to do with its design and everything to do with its location. "I would say, as an opinion, you got to be out of your mind to be building that close to the water unless you’re on pilings," he said. "You can build any home close to water; the bottom line is water is going to get in."

Obeysekera, the FIU sea-level expert, said residents of South Florida are becoming keenly aware of the growing risks from climate change, especially from so-called nuisance flooding that occurs regularly in the streets of Miami. But the risk message has been slower to take hold in other parts of the state, where seaside communities have lived with the vagaries of sea and surf for decades.

"People are reluctant to think about that; they try to defend their property as much as they can, and that’s the strategy that a lot of people are adopting," he said. "But at some point, they’ll have to start using that land for natural barriers to provide protection for other properties."

The Cape Romano dome home provides "a very telling example" of how climate change will inform what kinds of homes are built in Florida and where to build them.

Meanwhile, Lukens said he has seen an uptick in interest for geodesic homes from property owners in South Florida, along the Atlantic coast and even in the Panhandle, where Hurricane Michael obliterated the town of Mexico Beach last year.

"These homes may be more popular right now than ever," he said.