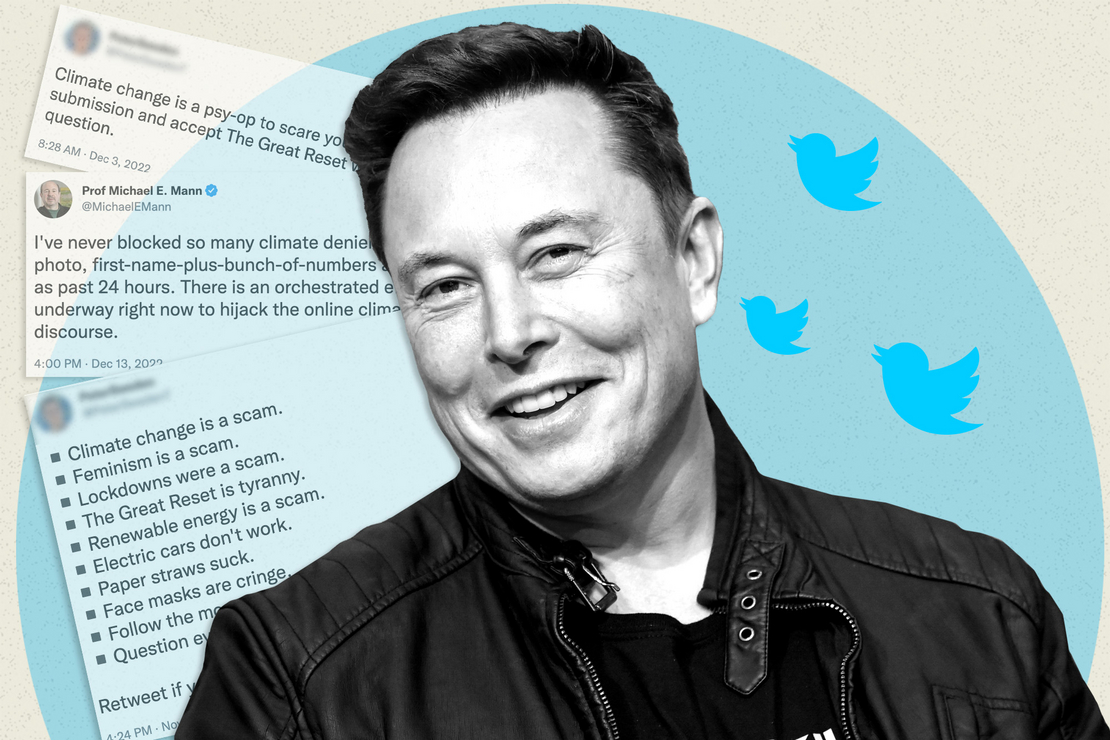 And it appears to be getting worse.

Since Musk’s purchase of Twitter two months ago, some prominent climate deniers have returned to the platform after being banned for pushing misinformation about the Covid-19 pandemic. There also are signs that scientists have left Twitter after their posts depicting global warming research were swarmed by critics.

Among the changes potentially driven by Musk’s effort to tear down barriers that once prohibited figures like former President Donald Trump from spreading election lies are a rise in the popularity of tweets that claim climate change is a scam. Some recent posts have earned 40,000 likes.

Marc Morano, who runs a blog that routinely attacks climate science, said that since Musk bought Twitter the appearance of his name in climate search results “appear to be juiced by the new algorithms.”

“My Twitter account and many others opposing the ‘consensus’ climate view have all increased visibility dramatically since Musk took over Twitter,” he said in an interview. “Whatever Musk is altering, I hope he keeps it up.”

Indeed, the number of tweets rejecting climate science have never been higher than in 2022, according to research by the University of London conducted on behalf of The Times newspaper. There have been more than 850,000 climate denial tweets or retweets so far this year. There were 650,000 such messages in 2021 and 220,000 in 2020, the analysis found.

Musk has said he will sell the blue check marks that Twitter uses to verify account holders to anyone who pays $8 a month. Users who pay the fee will see their posts “rocket to the top of replies, mentions and search,” according to Twitter. That could also mean that scientists who refuse to pay the monthly fee could see their posts lose visibility.

Climate misinformation has long been present on Twitter. But the proposed blue check mark policy could make the social media platform a larger clearinghouse for climate denialism, experts say.

Tweets that misinform the public about climate change can increase interactions on Twitter by generating controversy, said Michelle Amazeen, director of the Communication Research Center at Boston University and an expert on climate disinformation and social media.

“Twitter wasn’t designed to provide accurate info. Twitter is designed to maximize people’s attention and engagement. And how do you do that? You surface sensational, emotionally evocative content rather than surface deliberative rational information,” she said. “That’s not sexy, it’s all about the architecture.”

Earlier this week, a search for “climate” on Twitter resulted in “#ClimateScam” as the top term on the platform. Tweets using that hashtag were a miasma of climate disinformation, cherry-picked statistics and conspiracy theories. On another day, the top result was “climate lockdown,” a reference to the Great Reset conspiracy theory that claims a group of global elites is planning to shut down economic activity around the world to cut carbon emissions (Climatewire, Dec. 6).

Milloy and Moore did not respond to requests for comment.

Some prominent Twitter users who convey climate misinformation and were banned from the platform for other reasons have returned under Musk’s ownership. Tony Heller, who was removed for spreading Covid-19 misinformation, has recently tweeted inaccuracies about global warming. More prominently, the Canadian author Jordan Peterson, who was removed for tweeting transphobic messages, was allowed back on Twitter under Musk and now frequently pushes climate disinformation to his 3.5 million followers. He recently retweeted Heller using the term #climatescam.

Prominent climate scientists say they are experiencing an increase of “climate denier bots” — which they identify as having a Twitter handle followed by a name and a bunch of numbers — that respond to their posts. It seems to be an effort to disrupt online climate discourse, said climate scientist Michael Mann, director of the Penn Center for Science, Sustainability and the Media at the University of Pennsylvania.

“Twitter was a primary medium for dissemination of the facts surrounding the climate crisis,” Mann said in an email. “By infecting the online discourse w/ massive troll and bot armies, it becomes very difficult to communicate these facts, which is precisely what polluters and petro-state bad actors like Russia and Saudi Arabia want.”

Katharine Hayhoe, a climatologist and chief scientist at the Nature Conservancy, also experienced a swarm of bots in recent weeks. She has been testing tweets and running experiments to check engagement and found a dramatic increase in troll and bot activity on climate tweets, she said. A few days ago, she received 3,000 replies from critics — or trolls — in one 24-hour period.

“I’m not totally sure what is happening, but there is something radically different going on the last month that has increased troll and bot activity on climate tweets by 15-30x according to my data,” Hayhoe tweeted recently.

She also created a master list of hundreds of climate scientists on Twitter. Its membership has shrunk by about 4 percent since the Musk takeover, she noted.

Even though Musk runs a company that has created the exact type of clean energy jobs that Biden wants to increase under the Inflation Reduction Act, he has elevated voices that routinely attack renewable energy and climate science. Some also attack the electric vehicle tax credits and grants that have been a key to Tesla’s growth.

In recent weeks, Musk’s team has provided internal company communications, or “Twitter Files,” to a select group of opinion writers. The communications show that Twitter officials discussed how to handle tweets related to Hunter Biden ahead of the 2020 election. One of the writers who received the documents was Michael Shellenberger, who has promoted increased fossil fuel consumption and attacked clean energy and climate science in congressional hearings as a Republican-invited witness.

‘Climate is a scam’

A few weeks after Musk bought Twitter on Oct. 27 for $44 billion, the company eliminated a policy that cracked down on Covid-19 misinformation. Some scientists, including Mann, said the policy also limited inaccurate climate narratives.

“That was a clear message that it’s open season on twitter for the promotion of anti-science, and clearly we’ve seen an escalation in climate denial rhetoric,” Mann said of the policy’s withdrawal.

Scientists concluded decades ago that humans are warming the planet at an unprecedented pace through the burning of fossil fuels. A movement to dilute those findings has been funded in part by energy companies and linked to conservative politics in the U.S. and other countries. Twitter is a key platform for spreading that type of false information.

In April, the Intergovernmental Panel on Climate Change released its sixth assessment report and found that effective communication of climate science has been significantly damaged by the spread of false claims on social media.

“Accurate transference of the climate science has been undermined significantly by climate change countermovements, in both legacy and new/social media environments through misinformation,” the report stated.

“We believe that climate denialism shouldn’t be monetized on Twitter, and that misrepresentative ads shouldn’t detract from important conversations about the climate crisis,” company officials wrote in a blog post.

It’s unclear if that policy is still in place. Musk has fired more than half of the company’s employees, including its communications department. The two authors of the blog no longer work for the company.

Since July, months before Musk bought Twitter, there was an uptick in content referring to “#ClimateScam,” “climate scam,” or “climate is a scam,” totaling more than 500,000 mentions, according to a report released last month by Climate Action Against Disinformation, an international coalition of environmental groups. The messages originated from about 150,000 accounts and spiked around the time that global climate talks began in Egypt last month, the report found.

Researchers found one account, @climate_fact, that was responsible for more than 50,000 tweets. Every few minutes, it retweeted posts that use “#climatescam,” “#greatreset” and other phrases. It’s unclear who runs the account or where they are located.