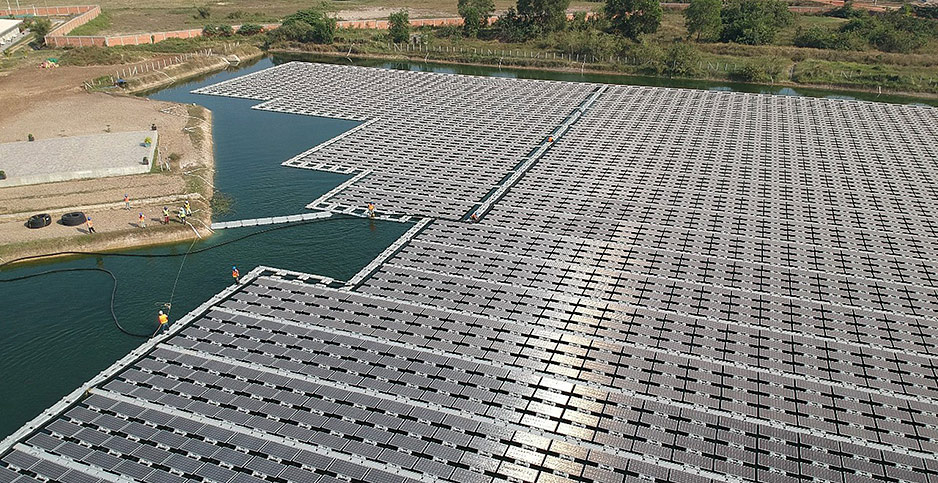 Climate-conscious local and state officials are increasingly embracing electricity sources that float on water, as they seek ways to convert their least-coveted spaces into hubs of electricity.

That barely scrapes the surface of the technology’s potential, according to federal researchers.

The National Renewable Energy Laboratory (NREL) found in a study last winter that government-owned reservoirs, utility cooling ponds and other man-made bodies of water could host enough solar photovoltaic panels to deliver 10% of the nation’s electricity.

In deep ocean waters, where traditional wind turbines can’t survive, floating wind systems moored to the seabed with flexible cords could produce more than twice the nation’s current electricity use, according to the lab.

And in contrast to land-based tech, floating wind and solar could serve metropolitan areas without forcing developers into crowded competitions for real estate, allowing them to save costs and sidestep most contentions with neighbors.

"There’s a little bit of the NIMBY effect with ground systems. No one wants it in their backyard," said Chris Bartle, business development manager for France-based Ciel et Terre, one of the world’s largest floating-solar developers.

The company’s panels, installed on platforms in close arrays, rise less than a foot-and-a-half off the water’s surface, he said. "They’re usually out of sight. So you don’t have that problem with floating solar.

"The biggest hurdle is just getting people used to the concept," he added.

Yet it’s unclear if the floating idea can gain traction and overcome logistical challenges.

For solar, it’s uncertain whether floating panels will prove as durable as their land-based counterparts. Mere ripples on the pond of a reservoir or irrigation pond, over time, might stress the structures, as could extended bouts of freezing weather, experts say.

"Most of what we’ve seen so far is, most systems are not well-monitored. And all you’d get is anecdotal evidence from owners and manufacturers," said Robert Spencer, a researcher in an NREL center for strategic energy analysis.

For floating wind, the technologies have barely begun to be tested. Only one small-scale project exists in the world, near Scotland, and the project in Maine, known as Aqua Ventus, is still years away from installation.

"It all comes down to demonstrating the cost of energy," said Walt Musial, who manages NREL’s offshore wind program. "We have to show that we’ve achieved a low enough cost to compete with other energy sources."

Nuclear and gas, too

Developers of fossil fuel sources of power — like gas turbines — have long mounted plants on barges and docked them in urban rivers and bays, in part to avoid wars over siting.

One of the world’s most prolific designers of floating gas plants, Houston-based naval consultancy Waller Marine Inc., is now developing a proposal for a floating battery-storage system near New York City, according to its president.

A few scientists even want to give nuclear reactors the floating treatment.

Jacopo Buongiorno, a nuclear engineer at the Massachusetts Institute of Technology, said putting reactors on a ship wouldn’t just be cheaper and safer than traditional nuclear plants, it would allow the operators to pull up anchor and migrate toward new sources of demand.

"Market conditions change all the time," said Buongiorno. "If you have a mobile power plant, then you have the option of moving it to another site where maybe the market is more favorable."

Many Western energy officials consider it politically unthinkable. But it’s on the rise elsewhere in the world, and not so different, at least in concept, from the mobile nuclear reactors used to power many U.S. Navy vessels.

In late June, Russia’s state nuclear agency approved a 10-year permit for the Akademik Lomonosov, the first nuclear plant in the world designed from the outset to be mounted on a ship. Once towed to an Arctic port town, its two reactors will underpin the country’s fossil fuel exploration in the region. It can supply enough electricity for a town of 200,000.

Environmental critics consider it a radioactive disaster waiting to happen.

"If this development is not stopped, the next nuclear catastrophe could well be a Chernobyl on ice or a Chernobyl on-the-rocks," wrote Greenpeace in a blog post last year.

The Akademik might not be the last project of its kind, however. In 2021, Chinese energy authorities expect to introduce floating nuclear stations that would power oil and gas projects in the South China Sea — and, some say, military installations on its artificial islands.

‘How can you mix electricity and water’?

In the United States, researchers and developers say that floating solar, in particular, has a shot at swift proliferation.

Fewer than two dozen projects have come online in the United States. But Ciel et Terre and other companies already have substantial experience in Japan and other Asian countries. And as the industry grows, the main source of cost — the pontoon bases that buoy the panels — could get cheaper, advocates say.

NREL has also identified nearly 25,000 artificial bodies of water — including hydroelectric dams — as suitable host sites, many of them owned by the federal government.

"Every day I’m answering the initial questions like, ‘How can you mix electricity and water?’" said Bartle of Ciel et Terre. "But it’s much more widely known now than it was two to three years ago in the U.S."

One selling point is the possibility of packing more panels into a smaller amount of space. A pond can sometimes fit twice as many panels as a field with the same acreage, since there’s no need for machinery to eke through while pruning trees or mowing grass.

"There’s a slight decrease in [power] production per panel, but much more production per acre," said Jordan Macknick, lead energy-water-land analyst at NREL.

By comparison, wind’s floating counterpart is still in its adolescence. Just one pilot project exists worldwide, and none in the United States.

Yet some corners of the offshore-wind industry speak of floating technology as a next-generation idea that could, perhaps a decade from now, introduce a grander dimension of scale. Yet if traditional offshore wind is a case study, it may not be easy.

State governments in the Northeast and Mid-Atlantic have already kick-started that industry by putting in orders for power from fixed-bottom turbines, whose foundations bore down into the seabed in relatively shallow waters. Other industries, including fishing and shipping, have pushed back against any encroachment into their usual lanes, and some tourist towns worry that turbine projects could drive away beachgoers or slash property values.

Beyond those high-traffic areas, however, where the water depth reaches 300 or 400 feet, floating systems could harness stronger winds, out of range of most overlapping claims, proponents say.

But early development has been hamstrung precisely by competing uses for the same waters.

In the Gulf of Maine, a 12-megawatt floating pilot that won $40 million in Energy Department funds was stalled by utility regulators. Advocates saw it as part of former Republican Gov. Paul LePage’s wider hostility to renewables.

"There was a period of time in Maine where some of these renewable projects weren’t being moved forward," said Habib Dagher, professor of structural engineering at the University of Maine and project lead for the pilot, Aqua Ventus.

Dagher’s design places turbines on top of semisubmersible concrete hulls, which keeps them afloat but also steady on the water by virtue of their weight. The same concept, he said, could eventually support thousands of turbines.

"In Maine, we have very deep waters. When you’re 2 nautical miles off the coast, it’s 100 meters of water. It’s really not feasible at all to do fixed-bottom," he said.

The University of Maine owns the patent and wants to license it to for-profit developers. It’s trying to raise another $100 million in investment for the current pilot.

The state’s lobster industry continues to oppose it, and residents of at least one town have organized against a proposed transmission line that would go ashore nearby.

Lawmakers have come around to the idea, however. The Democratic Legislature and new governor, Janet Mills (D), passed a law in late June that instructed regulators to approve a long-term utility contract for power from the pilot.

There’s at least one critical question about the new technology that’s yet to be answered: whether floating systems can be assembled, installed and brought online cheaply enough to ever compete with other technologies, said NREL’s Musial.

"Once we can do that, then the floating technology will open wide regions that can’t be accessed otherwise," he said.

Correction: The article originally identified the Akademik Lomonosov as the first floating nuclear plant in the world. Another project that launched in the 1960s by the U.S. Army Corps of Engineers sited a nuclear reactor on a refitted cargo ship.