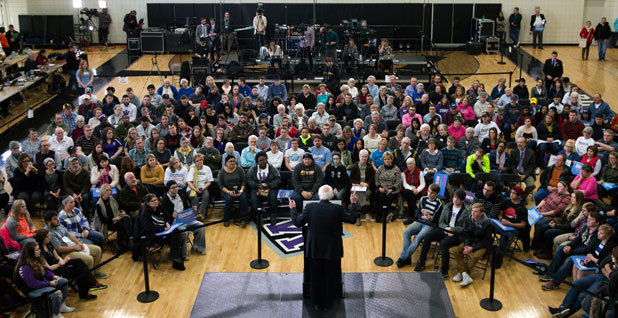 The struggle to expand or restrict the nation’s action on climate change in the next presidency intensifies today in Iowa.

In tonight’s caucuses, Democrats are fighting in part for the title of the best climate candidate. All three presidential candidates propose strong action on clean energy as a sign of their commitment to advance President Obama’s unmatched efforts to address climbing temperatures and to attract core voters.

Republicans promise the reverse. Most have pledged to roll back Obama’s rules to cut carbon emissions by 32 percent in America’s electricity sector. Some say the climate is changing. But the two leading Republicans say it’s not because of people. A few say that humans contribute to warming; none argue that it requires a strong response.

That election landscape is creating one of the sharpest divisions on global warming in recent memory, according to observers. That gap didn’t exist in 2008, when both Obama and Arizona Sen. John McCain (R) campaigned to enact a carbon price. In 2012, the issue was barely mentioned by either Obama or Republican Mitt Romney.

Tonight, Iowa voters will set the next struggle in motion.

The caucuses helped spring Obama to the White House in 2008. Now Sen. Bernie Sanders (I-Vt.) is hoping for a similar boost. Following Obama’s example eight years ago by beating Hillary Clinton in Iowa could accelerate him into the New Hampshire primary next week, where he holds a strong lead.

Sanders’ campaign is describing him as a dramatically ambitious climate candidate who supports a carbon tax, opposes fracking and promises to eliminate fossil fuel subsidies. Clinton’s camp sketches her as a practical torchbearer for Obama’s historic efforts to cut carbon emissions. She has pledged to derive half of the nation’s energy from nonemitting sources by 2030. Unlike Sanders, she isn’t proposing a carbon price.

This weekend, Clinton continued her strategy of speaking like she’s best-suited to win the general election in November. Instead of firing attacks at Sanders, who’s trailing her in Iowa by 3 points, Clinton took aim at her GOP opponents’ skepticism on climate change. She claimed that their doubts are driven by corporate interests, symbolized by billionaires David and Charles Koch.

"Most of them are not that ill-informed," Clinton said in Cedar Rapids, Iowa. "They just have to do what the Koch brothers tell them. They say, ‘Don’t believe your lying eyes; listen to us.’"

Democrat Martin O’Malley just hopes to survive. He’s pinning his hopes on making a surprise finish tonight, after months of making climate a key message in his campaign. He supports a national carbon price, wants to derive 100 percent of the nation’s electricity from clean sources by 2050 and has suggested that he would regulate emitting sectors like industry.

While Democrats are fighting to be green, redder is better for Republicans.

Nearly half of all Iowa GOP caucusgoers in 2012 described themselves as very conservative, while another 37 percent said they were somewhat conservative. Together, they amount to 84 percent of voting Republicans. Fifteen percent are self-described moderates.

That’s not good news for Jeb Bush, New Jersey Gov. Chris Christie and Ohio Gov. John Kasich — all of whom are seen as establishment candidates who have said, to some degree, that people contribute to global warming.

Kasich seems to be the most forward-leaning. He was recently asked why so many Republicans question the science behind climate change. His halting answer symbolizes the risk of embracing the issue in a primary season that’s dominated by Republican voters who view climate change as a Democratic agenda item.

"I think that human beings do affect the climate, and I’m a big supporter of solar and wind and geothermal and efficiency. But I want all of the different sources," Kasich said in New Hampshire last month.

"I really know — I really have an opinion why they do that, but I’m not going to tell you, ’cause it’s not good," he added, referring to Republican skepticism. "I am running in a Republican primary."

On the other hand, Iowa’s conservative makeup plays well for Sen. Ted Cruz (R-Texas), whose positions against climate science and for military action in Syria stand to resonate with core conservatives. Celebrity businessman Donald Trump has said that global warming is a hoax derived by Democrats and their allies to make money.

Trump jumped to the head of the pack in Saturday’s poll, leading in Iowa for the first time since August with 28 percent of likely Republican caucusgoers. Cruz’s December rise stumbled in January amid attacks concentrated on his positions on issues like immigration; 23 percent support him in the new poll.

With today’s vote in his sights, Cruz has embraced climate skepticism. He held a hearing in December that described the science around warming as a kind of liberal religion. He’s suggested that the government only gives grants to scientists who convey a false narrative about warming. And he claims that academia and Democrats are hiding the truth about a "pause" in rising temperatures.

Scientists say many of Cruz’s assertions are wrong. Sometimes he points to a single incident as evidence that climate change is make-believe. That happened recently in New Hampshire.

Cruz was confronted by a climate activist at a town hall last month who questioned why Cruz believes there’s been a temperature pause.

"That’s not true," said the activist, a man who appeared to be in his 20s. "The past two years have been the warmest on record."

The Texas senator then delved into a story about the research ship MV Akademik Shokalskiy, which became stranded in sea ice near Antarctica for 10 days in 2012. Cruz poked fun at the climate researchers aboard, saying with irony that they were marooned by the same ice they claim is shrinking.

"And it is in fact a fact that the polar ice caps are bigger today than they were before," Cruz said in a video distributed by 350.org, an environmental advocacy group.

"The ship got stuck in the ice because instead of the ice melting, the ice caps are bigger," he added. "One of the problems is there’s far too much propaganda and political agenda from politicians who want power and who want to drive up your electric bills."

Ice overall is generally shrinking around the world. This is the case with land-based ice sheets in the Arctic, Greenland and parts of Antarctica. That causes sea levels to rise. Second, some sea ice is also receding, like the stuff in the Arctic along the Northwest Passage. In some areas of Antarctica, some ice sheets seem to be growing while others are melting. And sea ice there is expanding somewhat.

None of Cruz’s comments disprove climate change, said Richard Alley, a scientist at Pennsylvania State University who specializes in the effects of global warming on ice. Indeed, it could be argued that warming has the strange effect of growing Antarctic sea ice through added precipitation and by reducing the salinity of seawater, he said.

But mostly, Cruz seems to be talking about "the weather" when he points to a specific mass of sea ice that marooned the ship, not a climate trend of 30 years or more.

It’s unclear if Cruz’s position could help him attract conservative votes in Iowa. The state is seeing increased flooding, sharpening risk of drought and other impacts of warming on its agricultural industry. But while farmers there acknowledge the increase in variable weather, most of them don’t see it as a problem caused by people.

In the 2013 Farm Poll, 41 percent of 2,200 farmers in Iowa said humans are at least partly responsible for rising temperatures. For researchers and educators who speak directly with farmers about adapting their crops to survive changing weather, the results suggest that they avoid direct references to man-made climate change.

"We recommend for the folks that are talking with farmers one on one, it’s probably a more effective communication strategy to talk about more extreme weather rather than saying, ‘Let’s take care of anthropogenic climate change,’" said J. Gordon Arbuckle, a sociology professor with Iowa State University who helps conduct the survey. "It’s a pragmatic approach."

He noted that attitudes are changing. Belief in the idea that people contribute to warming rose 5 points between 2011 and 2013, to 16 percent, Arbuckle said.

Others note that Iowa is third in the nation for renewable energy, and it derives about 30 percent of its electricity from wind turbines that are often located in farmers’ fields. So while warming might not be a political imperative, it is an economic one, said Jeff Biggers, who oversees the Climate Narrative Project at the University of Iowa.

"They’re almost climate activists without even knowing it, and they’re doing much more than the rest of us," Biggers said of rural Iowans.