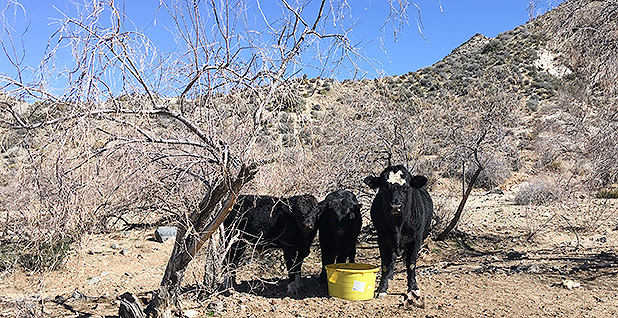 In an eight-page ruling, Nevada state Judge Jim Crockett rejected Bundy’s assertion that only individual states — rather than the U.S. government — can own public lands.

"It is simply delusional to maintain that all public land within the boundaries of Nevada belongs to the State of Nevada," Crockett wrote in the decision dated April 1 and published yesterday.

Bundy’s lawsuit had asked the court to declare all public lands within the state, including those lands surrounding his Bunkerville ranch where he grazed his cattle without federal permits for decades, as "property of the People of Nevada and Clark County."

But Crockett pointed to a trio of federal court rulings that have rejected Bundy’s arguments against federal ownership of public lands.

"It is painfully obvious that the claims asserted by Bundy in the instant matter rest upon a fundamentally flawed notion advanced by Bundy since 1998 regarding ownership of federal public lands in Nevada," Crockett wrote.

Attorney Larry Klayman, who represents Bundy along with Nevada-based attorney Craig Mueller, told E&E News that his client will appeal the decision.

"We’ll take it all the way to U.S. Supreme Court if necessary," Klayman said. "I don’t understand why a judge would not want to protect the interests of the people of Clark County who own that land and not be in the hip pocket of the federal government."

"The fact that he would make a statement and call my client ‘delusional,’ that is unnecessary," Klayman said. "A judge is to be respectful against litigants."

Klayman added that Crockett did not use similar language when he first made his ruling in oral remarks in a hearing at the Las Vegas court last month.

"He’s playing to the crowd," Klayman asserted. "That is contrary to the code of judicial ethics. We have legitimate arguments. We were respectful to him. We would have hoped he had been respectful to us."

Klayman also questioned the judge’s rejection of Bundy’s case based on "preclusion," or the application of prior court rulings against Bundy’s challenges to federal ownership of public lands.

"It’s a new issue here," Klayman argued, pointing to the 2016 establishment of the Gold Butte National Monument near Mesquite, Nev., where some of Bundy’s cattle graze.

But Center for Biological Diversity Executive Director Kierán Suckling praised the ruling, which was issued in response to a motion from the nonprofit. The environmental group intervened in the case on behalf of Clark County and the state of Nevada (E&E News PM, Jan. 24).

"The judge was being kind to call these claims delusional," Suckling said. "Bundy’s ridiculous legal theories have wasted the court’s time and taxpayer money. Hopefully this unequivocal ruling will encourage Bundy to finally pay his grazing fees and bring this nonsense to a close. I’m not holding my breath, though."

Bundy came to national prominence in 2014, when the Bureau of Land Management attempted to seize his cattle for auction to settle more than $1 million in unpaid grazing fines and trespass fees.

An armed standoff between supporters of the Nevada rancher — including anti-government advocates like the militia organization Three Percenters — and federal agents ensued, and BLM abandoned its efforts to seize the animals.

Bundy and his supporters, including several of his sons, faced criminal charges stemming from the incident, but a federal judge declared a mistrial in that case in 2017 after finding that prosecutors had withheld key evidence from the defendants.

Federal prosecutors have asked the 9th U.S. Circuit Court of Appeals to reconsider that ruling (Greenwire, March 11). Bundy had argued his continued prosecution would violate the Constitution.

Bundy ended his grazing contracts with BLM in the early 1990s and has often described his decision to "fire" federal land managers.

Federal officials sued Bundy in 1998 over his subsequent nonpayment of grazing fees and won a judgment that required Bundy to pay a trespass fine of $200 per day per animal that remained grazing on federal lands after that decision.

But BLM officials have not attempted a new seizure of Bundy’s cattle in the more than five years since the failed Bunkerville roundup.

The agency acknowledged in late 2017 that it was contemplating a new roundup but has not acted since that time. A spokeswoman did not immediately respond to requests for comment today (Greenwire, Nov. 20, 2017).