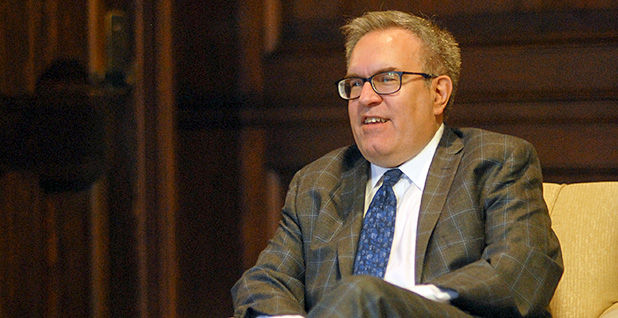 Acting EPA Administrator Andrew Wheeler is about to get a science test.

During Scott Pruitt’s tenure as EPA chief, the agency’s science was sidelined. Web pages explaining climate science disappeared. Pruitt contradicted scientists by claiming that humans aren’t the primary drivers of climate change. Researchers on EPA science advisory boards who received agency grants were deemed to have conflicts of interest, while industry researchers were framed as independent. A rule was proposed that would restrict which science could be used in regulations.

But since Pruitt resigned under a cloud of ethics scandals last month, attention has turned to Wheeler and whether he will continue some of Pruitt’s more controversial moves on science.

A series of key decisions in the coming weeks will offer some clues.

One early test will be Wheeler’s picks for EPA science advisory boards, which are expected in the next month or so.

When Pruitt reworked those boards last year, he forced off academic researchers who received EPA grants and replaced them with researchers funded by industries the agency is tasked with regulating. Although independent academic researchers still make up the bulk of the chartered Science Advisory Board and the Clean Air Scientific Advisory Committee, the newest round of appointments could tip the balance of those boards toward industry.

Wheeler will also have an opportunity to reshape Pruitt’s proposed rule to require that science used in EPA regulations have open and reproducible data. Critics say that rule is tailored to discount major human health studies where participants were granted anonymity. The public comment period on that rule closes this week.

Observers say there is no indication that Wheeler, who has long criticized established climate science, will take a dramatically different approach from his predecessor.

Wheeler is likely to support a variety of SAB candidates, said Matt Dempsey, who worked with Wheeler in the office of Sen. Jim Inhofe (R-Okla.) and now works with a consulting firm representing the oil and gas industry. Dempsey said he doesn’t see any major change in the way EPA will approach science under Wheeler.

"Both Pruitt and Wheeler work for the Trump administration, and Andrew has been clear from the beginning that the policy side was going to stay largely the same under Trump and what he’s doing at the EPA," Dempsey said.

These upcoming decisions are Wheeler’s opportunity to side either with science or with conservative ideologues, said John Walke, director of the federal clean air, climate and clean energy program at the Natural Resources Defense Council.

Walke said a federal appeals court’s rebuke last week of Pruitt’s decision to lift a ban on chlorpyrifos — a pesticide linked to health problems — shows that the agency will lose in court if it tries to ignore science. He also said that Wheeler’s unwillingness to put the ban back in place shows he is likely to be similar to Pruitt on science.

"Wheeler is at a juncture where he can decide to follow the path of Scott Pruitt in appointing avowed science deniers concerning climate, PM2.5 [fine particulate matter] and ozone," Walke said. "Or he can follow the more traditional Republican path set forth in both Bush administrations of appointing industry scientists and academics who are more skeptical of science and principles like the precautionary principle, but are not outright deniers like those Scott Pruitt appointed to official science advisory bodies for the first time."

The nominations for the chartered Science Advisory Board, the agency’s most influential sounding board of researchers, closed last week, and the new members will be selected by the end of October.

Last year, Pruitt picked researchers including some funded by the American Petroleum Institute and the American Chemistry Council, whose work downplays the human health risks of pollution. Observers expect that the new list of names is likely to include a number of researchers who are funded by the oil and gas or chemicals industries. The Clean Air Scientific Advisory Committee nominees include a number of candidates whose research is funded by industry or conservative think tanks.

Wheeler will likely continue in the same direction as Pruitt when it comes to deregulation, and that will inform his approach to industry science, said Jeff Holmstead, former EPA assistant administrator for air and radiation under President George W. Bush. However, Wheeler will likely take a more nuanced and measured approach than Pruitt when it comes to agency science, Holmstead said. That could mean a reworked version of the science transparency plan, which would allow for the use of some historic and groundbreaking studies, and advisory boards with industry as well as academic researchers.

"He generally shares Pruitt’s concerns about the SAB and some of the science issues, but I would also say Andy probably has a more sophisticated understanding of the issues, and I think whatever comes out is likely to be a bit more nuanced than what was proposed," he said. "I do think there is an issue that EPA has not always appointed people to the SAB and especially to some of the subpanels who really cover the range of legitimate opinions. I think Andy will want to be sure he has a range of viewpoints and not necessarily all people who come from one point of view."

The world of academe is eyeing Wheeler’s next moves on science nervously.

Last week, Harvard University’s president and the leaders of its law school, medical school, school of public health and teaching hospitals sent a letter to Wheeler asking him to withdraw the proposed science transparency rule because it would have a devastating effect on regulations that protect the public from lead, air pollution and water pollution. Harvard researchers produced the groundbreaking Six Cities study, which linked air pollution to serious human health problems and which critics of Pruitt’s proposal say is a target of the draft regulation.

"The proposed rule would — for no rational reason — prevent EPA from relying on much of the research that the signatories, their institutions, and other public health and environmental exposure researchers have conducted and continue to conduct," they wrote. "The rule will cripple EPA’s ability to implement the aforementioned Statutes and will jeopardize the health and safety of infants, children, and adults in the United States and beyond."

During her tenure at EPA, the members of the Clean Air Scientific Advisory Committee pushed the agency to be clearer and more thorough and to make sure all the right questions were asked, she said. That independent advice was taken seriously by the administrator. Now, she said, those on the board will be weighing in on regulations that could potentially affect the bottom line of their employers. She said Wheeler’s choices will set a new direction for the agency and could turn it further away from its mission to protect public health.

"It will be troubling if a significant number of any of these panels are made up of industry representatives," she said. "I don’t know how they cannot be representing the interests of their industry in their work they do there."