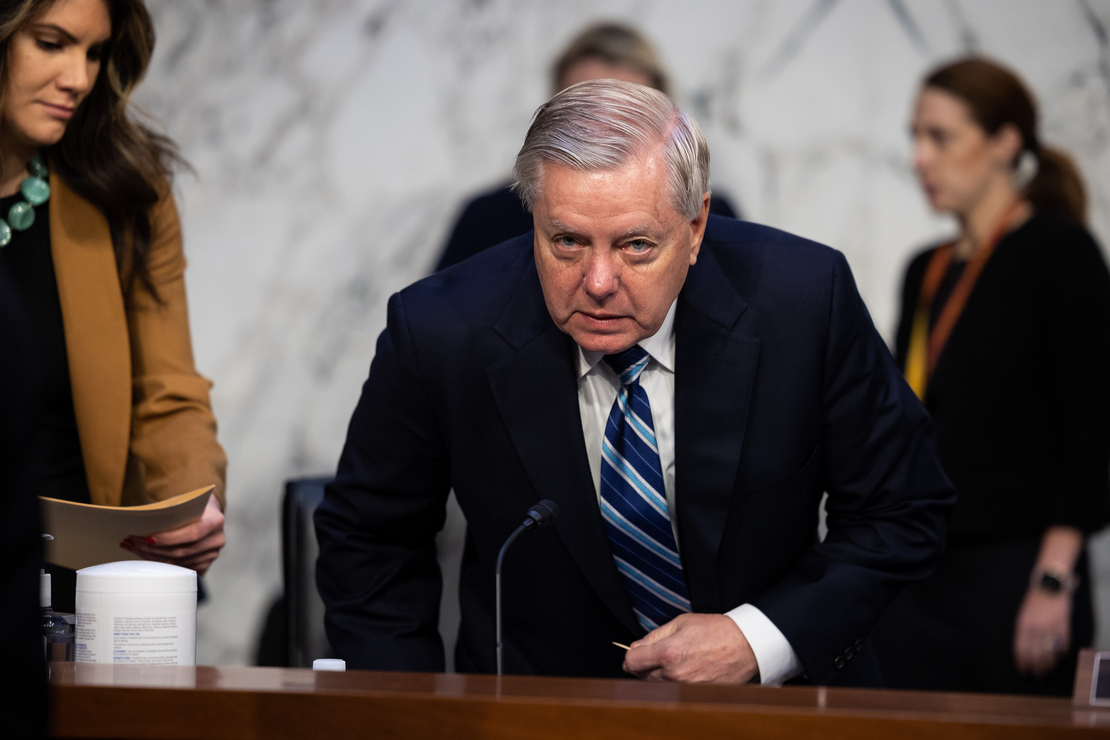 Members of the panel met this morning but are still waiting on Sen. Alex Padilla (D-Calif.), whose flight to Washington returned to Los Angeles after a passenger experienced a medical emergency, according to a spokesperson for the lawmaker.

The committee is now in recess and will reconvene later today.

The committee is expected to deadlock on Jackson, setting the stage for Democratic leaders to follow special procedures to secure a floor vote — a process that hasn’t been used for a Supreme Court nominee since the 1800s (E&E Daily, April 4).

Jackson, who would replace retiring Justice Stephen Breyer, is expected to be confirmed to the nation’s highest bench with narrow bipartisan support — but no Republican members of the Judiciary Committee are expected to vote in favor of the nominee.

Sen. Lindsey Graham of South Carolina, the only Republican on the committee who voted for Jackson’s confirmation to a lower court, today called the nominee “activist to the core.”

He decried Jackson’s 2019 ruling in an Administrative Procedure Act case that Graham and other Republicans cited as an example of the judge’s willingness to reject the plain text of a statute.

In Make the Road New York v. McAleenan, Jackson, then a judge of the U.S. District Court for the District of Columbia, stopped the Trump administration from expanding its expedited deportation authority.

The ruling was later overturned by the U.S. Court of Appeals for the District of Columbia Circuit — where Jackson now sits — which found that the agency action in question was unreviewable (Energywire, March 25).

“She wants an outcome, she’s going to get it,” said Graham, one of three Republicans to vote to confirm her to the D.C. Circuit last year when her nomination came up before the full Senate.

Graham said today that his vote for lower court confirmations do not dictate his Supreme Court votes.

“The Supreme Court is different than the circuit court,” Graham said this morning.

Sen. Susan Collins of Maine — who also voted to confirm Jackson to the D.C. Circuit — has committed to support the nominee to the Supreme Court. Sen. Lisa Murkowski of Alaska, the third Republican who supported Jackson for the D.C. Circuit, has not yet announced her plans (Greenwire, March 30).

During her four-day confirmation hearings, Jackson faced partisan attacks on her record in child sex abuse cases and her views on racism education in K-12 schools (E&E Daily, March 24).

Jackson, a former public defender and U.S. Sentencing Commission member, would be the first Black woman to serve on the Supreme Court.

Other GOP committee members this morning criticized Jackson for failing to align herself with a judicial philosophy, such as originalism, which says judges must consider the original intent of texts like the Constitution when interpreting their meaning.

Jackson, a Harvard College and Harvard Law School graduate who has been a federal judge for nearly a decade, instead outlined a methodology by which she decides cases: She said she clears her mind of preconceived notions, considers the arguments before her and analyzes the original intent of the relevant laws.

Judiciary Chair Dick Durbin (D-Ill.) said today that he found her explanation “far more insightful” than a claim to adhere to a particular judicial philosophy.

He also pointed his colleagues back to Jackson’s nearly 600 federal rulings, in which she has come down in favor of both Republican and Democratic administrations — including in environmental cases (Greenwire, Feb. 25).

“We’ve seen the evidence of her evenhandedness ourselves,” Durbin said.

Some Democrats on the committee took aim at their colleagues for politicizing the Supreme Court nomination process. The court is now dominated by six conservative justices, due in part to maneuvering by Republican Senate leaders to ensure that former President Trump could nominate three justices.

Jackson would not shift the court’s ideological balance but would reinforce its diminished liberal wing. During her confirmation hearing, she declined to answer lawmakers’ questions about whether it was appropriate to expand — or “pack” — the court to restore the balance.

“It is a self-fulfilling prophesy,” said Sen. Richard Blumenthal (D-Conn.), referring to the politically divisive nature of Supreme Court confirmations. “And we are fulfilling it.”

The committee is also slated to vote on the following nominees today: