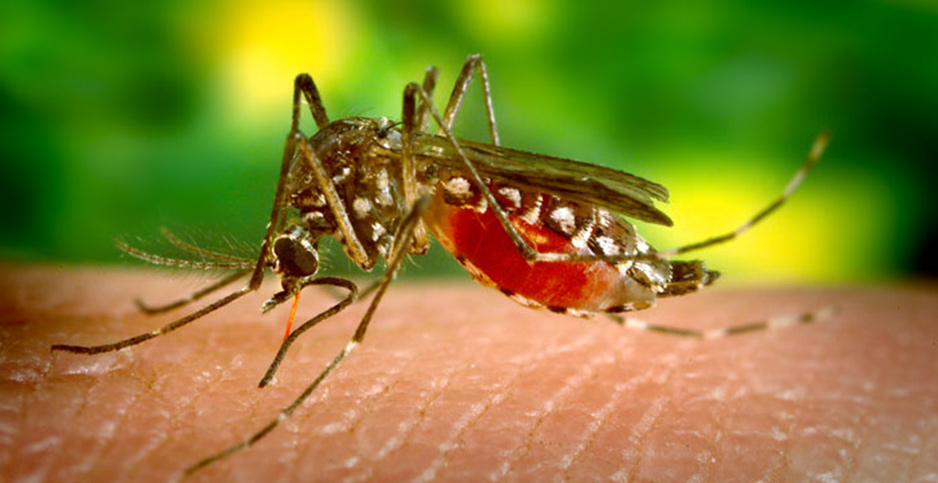 Testing found per- and polyfluoroalkyl substances in a pesticide used for mosquito control. James Gathany, jentavery/Flickr

A pesticide widely used for mosquito control in Maryland and other states contains so-called forever chemicals — including a notorious compound phased out of U.S. production years ago due to health concerns — according to recent test results.

Testing ordered by Public Employees for Environmental Responsibility (PEER) and the Maryland Pesticide Education Network (MPEN) found per- and polyfluoroalkyl substances in Permanone 30-30, an insecticide used by the Maryland Department of Agriculture (MDA) in its mosquito control efforts. The results come just weeks before the state is scheduled to begin its annual mosquito control spraying of 2,100 communities in 16 counties.

"It’s alarming," MPEN Executive Director Ruth Berlin said, adding that if the insecticide is used in mosquito control efforts next month, it could result in PFAS contamination in the Chesapeake Bay, where the compounds could imperil fish and other aquatic life. "We feel MDA has to terminate its use of this pesticide, and the use of it by private companies."

Samples analyzed by the groups found 3,500 parts per trillion of PFOA, one of the most widely researched PFAS. EPA’s health advisory limit for PFOA in drinking water is 70 ppt, and PFOA is no longer manufactured nationwide due to concern over its links to health effects like cancer and weakened immune systems.

The samples also revealed 630 ppt of HFPO-DA, part of the chemical process used in GenX, which has been linked to similar health issues as PFOA and sparked significant litigation in states like North Carolina.

PEER and MPEN yesterday sent their test results to EPA, MDA and the Maryland Department of the Environment in letters reviewed by E&E News. They requested that the state immediately stop using Permanone and test other pesticides it plans to use in mosquito control efforts this spring. The groups also asked federal regulators to conduct their own testing of the pesticide and require manufacturers to test for PFAS before bringing new chemicals to market.

But Permanone, made by Bayer CropScience LLC, is not the only pesticide that has been contaminated with PFAS. Testing first reported by E&E News earlier this month found the chemicals in multiple common pesticides (Greenwire, March 5).

"These chemicals are not supposed to be in this insecticide," PEER Executive Director Tim Whitehouse said. "EPA is failing in its job to protect public health and the environment and needs to immediately test all pesticides for the presence of PFAS."

Bayer redirected comment to CropLife America (CLA), stating that the issue is an "industry-wide topic" and that Bayer is still reviewing broader guidance from EPA. CLA, a trade association representing pesticide manufacturers, shared a statement from another association, Responsible Industry for a Sound Environment.

"The science is still developing within EPA to determine what is occurring, including refining testing methods," said RISE President Megan Provost. "PFAS chemistry is not an active or inert ingredient in any pesticide formulation."

Provost said RISE is continuing to work with EPA on issues around PFAS in pesticides.

EPA has largely linked the presence of PFAS in pesticides to fluorination of the containers holding the products. More specifically, the agency has scrutinized fluorinated coating applied to those containers, which helps repel dust, water and other substances.

The agency’s investigations into the issue have largely centered on fluorinated high-density polyethylene (HDPE) barrels used to transport Anvil. The agency found eight different pesticides in those barrels and pushed back on suggestions that manufacturers could be purposely adding PFAS to their products as "inert" ingredients to make the pesticides more efficient.

Earlier this month, EPA indicated it was looking into different types of fluorinated containers more broadly and would present the findings "as expeditiously as possible." EPA said it will review the Permanone test results "as part of the agency’s ongoing efforts to investigate PFAS contamination" involving pesticides.

"The agency is encouraging the pesticide industry to explore alternative packaging options, like steel drums or non-fluorinated HDPE," an EPA spokesperson shared in an email, adding that the agency has started broader testing of different brands of fluorinated containers to determine whether they contain or leach PFAS "to learn the conditions affecting leaching."

"EPA understands the need to provide guidance to states, tribes and other users as they prepare to purchase mosquito control products for 2021 and will provide more information as it continues its investigation," the spokesperson said.

It is unclear whether fluorinated packaging could explain the high PFAS levels found in Permanone, which was packaged in metal containers.

MDA spokesperson Jason Schellhardt said the department is still reviewing the Permanone testing and did not respond when asked whether it still plans to use the pesticide for mosquito spraying this spring.

But he appeared to draw a distinction between Permanone and EPA’s investigation, noting that the pesticides used by the department are packaged in metal containers.

"Early findings from the EPA suggest that PFAS levels found in pesticides are related to plastic containers," he wrote in an email.

Asked about the possibility that the metal containers could also be fluorinated and leaching PFAS, Schellhardt said, "We would defer to EPA on that and we are standing by for further guidance from them."

Advocates have argued that a lack of transparency around inert ingredients has left the public in the dark regarding the chemicals in the products they buy. Some are skeptical that such high amounts and different types of PFAS could be found across so many different pesticides without intentional chemical additions. Another possible source is legacy contamination, potentially from testing devices.

The EPA spokesperson said that pesticides registered with the agency, and those pending registration, "do not have chemical structures — or physical chemical properties" that are comparable to a number of specific PFAS compounds, including PFOA and GenX.

Regardless of how the PFAS got into the pesticides, Berlin said EPA should be taking the test results seriously.

"Whether the contamination is coming from intentional inclusion of PFAS in the pesticides or if it’s, as EPA has suggested, from contamination from the containers, either way, it’s contaminated," she said. "No pesticide should be used in our state without making sure it does not include these chemicals."