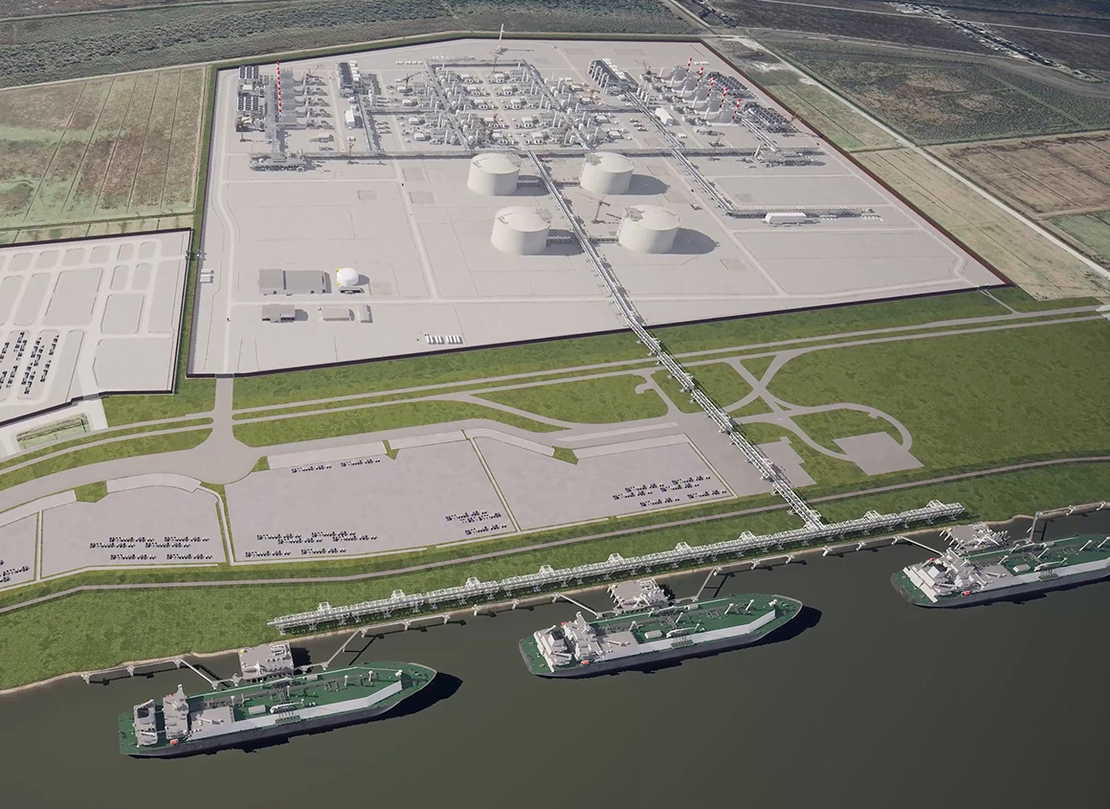 A rendering of a proposed liquefied natural gas facility in Louisiana. Venture Global LNG via PRNewswire

A Virginia-based company said it has secured $13.2 billion of financing for a planned liquefied natural gas facility in Louisiana, marking the first financial close of a U.S. LNG export project since August 2019.

Venture Global LNG announced the funding yesterday as well as a final investment decision to move ahead with the Plaquemines LNG facility, whose site is about 20 miles south of New Orleans. The $13.2 billion is for the project’s initial phase and the associated Gator Express pipeline.

The project and pipeline reached the financial milestone nearly three years after Venture Global’s Calcasieu Pass facility had its financial close, according to a company statement. The decision on Plaquemines also comes as the war in Ukraine surpasses the three-month mark and the European Union issued a plan aimed at reducing dependence on Russian natural gas and oil (Energywire, May 19).

The first phase of Plaquemines is expected to export up to 13.33 million metric tons of LNG per year and the transaction “represents the largest project financing in the world closed to date in 2022,” Venture Global said.

Calcasieu Pass “broke global records for speed and execution,” Sabel said in a news release yesterday on Plaquemines. “The project has attracted robust financial and commercial support, which has enabled us to formally sanction this project at a critical moment for energy markets.

“Speed matters more than ever and Venture Global is uniquely positioned to quickly bring US LNG to the market to support global energy security and environmental progress,” Sabel continued.

Charlie Riedl, executive director at the Center for Liquefied Natural Gas, said in a statement that a final investment decision, or FID, means Venture Global has all the necessary permits, commercial agreements, project financing and a contractor in place to build the facility.

“While the Plaquemines project is a few years away from operation, continued authorization of U.S. LNG projects will be an important tool for U.S. foreign policy and also help deter bad actors from weaponizing energy,” Riedl said.

The Biden administration’s LNG push has led to concerns among some progressive U.S. lawmakers (E&E Daily, May 20).

“It is critically important that our countries not lock ourselves into decades of further reliance on fossil fuels when climate science, environmental justice, and public health concerns necessitate a rapid transition towards full renewable energy,” read a May 19 letter from several Senate and House Democrats, including Sen. Jeff Merkley (D-Ore.), to President Joe Biden and European Commission President Ursula von der Leyen.

In yesterday’s statement on Plaquemines LNG, Venture Global said it has executed 20-year agreements for 80 percent of the full project, which will have an export capacity of up to 20 million metric tons per year.