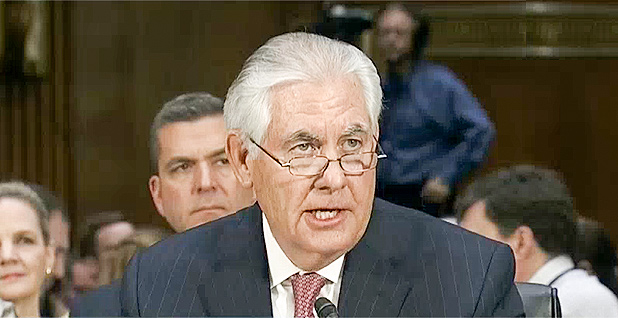 Former Exxon Mobil Corp. CEO Rex Tillerson testifies before the Senate Foreign Relations Committee yesterday on his nomination to be secretary of State in the Trump administration. Photo courtesy of C-SPAN.

Rex Tillerson, President-elect Donald Trump’s nominee to lead the State Department, displayed the steadiness under pressure for which he’s widely known as the former CEO of Exxon Mobil Corp. at yesterday’s daylong appearance before a Senate confirmation panel.

Yet on day one of his confirmation, Tillerson struggled to satisfy concerns that the oil giant’s lucrative exploration deals in Russia cloud his view on U.S. sanctions targeting President Vladimir Putin and the Russian economy. Senators urged Tillerson to keep the U.S. seat at the table for implementation of the global Paris climate agreement, and they sought assurances he would align with broad U.S. interests around the world.

Tillerson retired from Exxon after a 42-year career at the company and a decade as its CEO. Democrats and Republicans, including Sen. Marco Rubio (R-Fla.), pressed Tillerson on his past criticism of U.S. sanctions against Russia that, if kept in place, would keep on ice Exxon’s projects in the Russian Arctic and its remote eastern oil fields.

During more than eight hours of testimony before the Senate Foreign Relations Committee, Tillerson criticized the Obama administration’s response to Russia’s invasion of Ukraine in 2014. He said the White House should have responded to the incursion with a show of military force that would have been "a powerful response that indicated that ‘Yes, you took the Crimea, but this stops right here.’"

Still, Tillerson described sanctions as a powerful foreign policy tool that, if "badly designed," can be worse than using none at all.

"I think it’s important to acknowledge that when sanctions are imposed, they either harm or are designed to disrupt American business," he said.

President Obama recently imposed new sanctions on Russia in response to intelligence reports that it was responsible for hacking into U.S. computer systems to interfere in the election. Trump has signaled he may reverse those once he takes office later this month. A bipartisan group of senators is also working on a measure that could make sanctions mandatory, rather than subject to executive reversal.

Tillerson said he would oppose rescinding the new sanctions on Russia until the incoming administration has completed a thorough review of the U.S.-Russia relationship. Rather than imposing a new, automatic sanctions regime targeting individuals or groups that hack into U.S. systems, he said, the administration should conduct a "comprehensive review of our cybersecurity policy."

A flashpoint in the hearing came early, during a series of questions from Sen. Bob Menendez (D-N.J.) on Iran and Russia. "To my knowledge, Exxon never lobbied against sanctions," Tillerson asserted.

But committee staff, reporters and others following the session quickly pulled up electronic filings of more than a dozen disclosure reports over the last decade in which Exxon showed it lobbied on sanctions. Tillerson also acknowledged that he had talked with Obama administration officials about the issue.

When presented with the lobbying reports, Tillerson said he did not know whether Exxon lobbied against sanctions bills or just a discussion of their structure and effects.

Another committee Democrat, Sen. Tom Udall of New Mexico, questioned Tillerson on how he would interact with Exxon officials as secretary of State.

"I would not extend to the new chairman and CEO of Exxon Mobil any courtesies that I would not extend to anyone," Tillerson said, adding that he was unlikely to receive phone calls directly from business leaders. When he was Exxon’s CEO, he said, he usually spoke with undersecretaries.

Later in the hearing, though, he alluded to speaking directly with Treasury Secretary Jack Lew about problems he saw with the Russian sanctions regime.

Tillerson said that if confirmed, he would recuse himself from issues affecting Exxon for one year, as required by law, but said after that, he would consult with the State Department ethics office and act on its guidance.

Speaking more broadly of his years in the energy industry, during which he served on the board of the American Petroleum Institute, Tillerson said it wouldn’t conflict directly with State business. "The scope of that is such that I would not expect to have to recuse myself," he said.

Finding the line on climate

Tillerson repeatedly leaned on his training as an engineer, demurring that he would need more information or access to classified files to consider all the facts before answering a question.

However, on the question of climate, he embraced his scientific background to reveal a clear split with Trump and other Cabinet nominees.

"I came to my personal position over about 20 years as an engineer and a scientist," Tillerson said. "The risk of climate change does exist, and the consequences of it could be serious enough that action should be taken. The type of action seems to be where the largest areas of debate exist in public discourse."

Tillerson questioned one element of climate science, saying that while the increasing atmospheric concentration of carbon dioxide is having an effect on the Earth, "our ability to predict that effect is very limited."

When asked how the United States should proceed with regard to the U.N.-brokered Paris Agreement on climate change, Tillerson deflected specific questions about funding commitments and other measures. But in language that seemed to address questions over whether he would recommend withdrawing from the pact, which imposes few concrete obligations on the countries that signed it, he said, "I think it’s important that the United States maintain its seat at the table on the conversations around how to address threats of climate change, which do require a global response."

In a tacit acknowledgement of the space between his own views on climate and those of the president-elect, Tillerson said Trump has sought out his opinion on the matter: "He has asked, and I feel free to express those views," he said. Tillerson also offered assurances that he would not lead any retaliation against State Department employees who have previously worked on climate policy, as some feared from an early line of transition team questioning, quipping, "That would be a pretty unhelpful way to get started."

Tillerson’s testimony apparently did little to sway numerous climate activists present at the hearing, including four people who rose at different points in the proceedings and called loudly for senators and the public to "Reject Rex" before being escorted away by security. "Please don’t put Exxon in charge of the State Department," one woman implored before she was led to the door.

As the hearing wrapped up yesterday evening, committee Chairman Bob Corker (R-Tenn.) praised the factual fluency evidenced in Tillerson’s ability to answer wide-ranging questions for hours without turning to written responses or notes.

While several senators in the minority challenged Tillerson with tough questions, Rubio of Florida was notable among the majority for the tough stance he took with the nominee.

Throughout the day, Rubio used his turns for questioning to press the nominee hard on subjects including Putin’s knowledge of Russian election hacking, its role in committing war crimes in Syria, the U.S. relationship with Cuba, and human rights violations in China and the Philippines. In a closing tirade, Rubio said his main concern was that throughout the day, Tillerson failed to show that he would take firm, principled stances on important issues.

"I was very pleased when you used the term ‘moral clarity,’ because that’s something we’ve been missing for the last eight years," Rubio said, turning to a phrase he has used often over the past year to describe an ideals-based foreign policy he wants to move toward.

"I have no questions about your character, your patriotism. You don’t need this job; you didn’t campaign for this job," Rubio said. "But I also told you when we met that the position you have been nominated to is, in my opinion, the second most important position in the U.S. government," he continued, leaving open to question whether Tillerson had met Rubio’s standards to fill it.

Rubio’s opinion, and committee vote, could be crucial in advancing Tillerson’s candidacy to consideration by the full Senate and ultimately in approving him. The Foreign Relations Committee is balanced 11-10 in favor of Republican members, so a single defection could keep the nomination from moving forward if Democrats act together to block it. In the larger Senate, Rubio is considered to be one of three Republican lawmakers, along with Sens. John McCain of Arizona and Lindsey Graham of South Carolina, who could bolt from a party-line vote.

Still, the broad consensus in Washington over the past several weeks has been that Tillerson is likely to be confirmed, given his reputation as a smart, charismatic leader who is skilled at winning people over.

As the hearing yesterday wrapped up, Corker told reporters that Rubio’s doubts did not necessarily indicate an intention to vote against the nominee, especially because Tillerson would use the coming days to meet with members again to discuss specific concerns. Ranking member Ben Cardin (D-Md.) noted outstanding concerns over issues including tax form disclosure and Russian sanctions, but in a warm tone assured Tillerson he would "look forward to working with you, if you’re confirmed."