Congressional anti-rule push may live on after methane vote 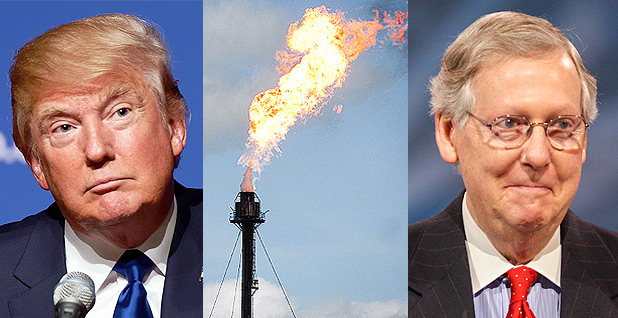 With time running out for Congress to kill Obama administration rules through the Congressional Review Act, methane standards are the last major target of the Republican majority. Photos courtesy of Michael Vadon/Wikipedia (Trump), Richard Webb/Geograph (flare) and Gage Skidemore/Flickr (McConnell).

The Congressional Review Act clock is ticking, and time is running out.

The window of opportunity to use the expedited procedure to roll back Obama-era regulations is set to close at the end of this week, and Senate Republicans are still trying to ram through one more resolution of disapproval.

Sen. John Barrasso (R-Wyo.) said that, despite some unforeseen opposition within his party, he is confident a vote against a controversial rule limiting methane waste on public lands will happen this week.

"We’d prefer sooner rather than later," said Dillon, whose organization supports repeal of the rule. "I think the votes are there. I think Barrasso is right," he said, adding that ACCF has been talking regularly to members about the issue.

However, Donald Stewart, deputy chief of staff to Majority Leader Mitch McConnell (R-Ky.), cautioned that McConnell had not yet announced when a methane rule vote would happen.

The House passed the resolution of disapproval, S.J. Res. 11, in February, but Senate Republicans have struggled to garner support for the measure.

A slight glitch arose last week when a couple of corn-state Republicans tried to leverage the methane vote to pass through a waiver of seasonal restrictions on the sale of E15, or 15 percent ethanol in gasoline.

Sens. Chuck Grassley (R-Iowa) and John Thune (R-S.D.)
signaled that their support of the methane repeal was contingent on Republican support for the ethanol change.

Relaxing restrictions for seasonal E15 use is not a party issue. Republicans remain divided, and Thune and Grassley’s obstinacy may not be a politically viable stance, analysts say.

Another hurdle could be Sen. Cory Gardner (R-Colo.), who remains publicly undecided on the issue, though he is expected to vote in favor of the repeal when push comes to shove.

The repeal of the methane rule would mark President Trump’s 14th deployment of the Congressional Review Act to roll back so-called midnight regulations finalized under the Obama administration.

Sponsored by former Rep. David McIntosh (R-Ind.), the CRA was signed by President Clinton in 1996. It requires federal agencies to submit final rules to both Congress and the Government Accountability Office before they can take effect.

Congress then has 60 legislative days to review the rule. Within that time, lawmakers can schedule a simple majority, up-or-down vote on whether to overturn it with fast-track procedures.

The "substantially similar" clause has been a point of contention for many watching the CRA scenario unfold. The environmental group Center for Biological Diversity last month filed a lawsuit arguing the provision is unconstitutional because it amounts to a legislative veto, which is prohibited (E&E News PM, April 20).

The rule-busting statute will likely come under intense scrutiny again when the Securities and Exchange Commission issues a new transparency rule for resource extraction firms.

Trump this year used the CRA to eliminate the agency’s second attempt at the rule, which is required under the Dodd-Frank Wall Street Reform and Consumer Protection Act.

When lawmakers scrap a rule mandated by statute, the issuing agency has a year from repeal to offer a new one that is not "substantially similar." Assuming Republicans do not repeal Dodd-Frank, the new rule will likely set the stage for an unprecedented legal battle.

If SEC releases a new rule that is seen as more flexible, watchdog groups will likely sue. But if the agency issues a standard that business groups see as too strict, they could launch litigation on the grounds that the new rule is "substantially similar" to the old (E&E Daily, Feb. 10).

Until this year, Congress and the White House had used the CRA successfully only once, to toss out a Labor Department rule in 2001.

Because the law requires the president’s signature on resolutions of disapproval, it is most successful at the start of a new administration; a president is not likely to undo actions taken under his executive authority.

Additionally, the CRA gives Congress 60 full legislative days to review new rules. If a rule is published in the Federal Register with fewer than 60 session days left, the clock starts over at the beginning of the next Congress with a fresh 60 days. That’s why the clock on all Obama rules published after June 13, 2016, started over in the 115th Congress.

Accordingly, lawmakers had 60 session days from Jan. 30 to vote on disapproval resolutions against the previous administration’s actions. But the House and the Senate measure time differently; the House uses legislative days, while the Senate uses session days.

How many calendar days fit into a session or legislative day varies, depending on leadership. For example, when Senate Democrats were attempting to stall Cabinet confirmations, five calendar days only counted as three session days.

The deadline to fast-track CRA resolutions is expected to expire either Thursday or Friday. But even after the 60-day window closes, Congress can still pass them. They just won’t qualify for expedited procedures.

Some conservatives are arguing, however, that the CRA could actually be used to roll back rules dating back to the 1990s that agencies never submitted properly (E&E Daily, March 7).

Todd Gaziano, who’s advocating for the expanded definition, was general counsel to McIntosh when he served in Congress and helped write the law.

Amit Narang, regulatory policy advocate at Public Citizen’s Congress Watch, said that reading of the law stretches it "way beyond its intent."

"I think that’s baloney," said Narang. "It reads into the CRA this paperwork requirement that becomes this be-all and end-all of whether a rule takes effect or not. That makes no sense."