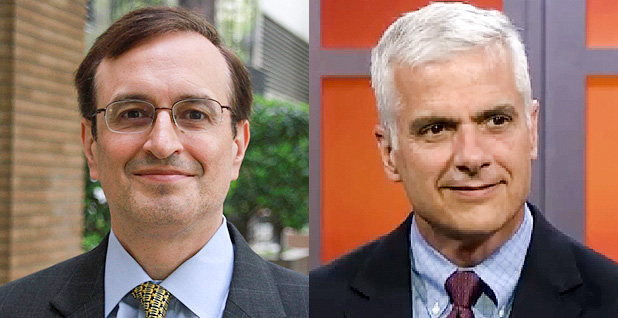 Legal scholar Todd Gaziano (left) believes the impact of the Congressional Review Act can be expanded. The bill creating the CRA was sponsored in 1996 by ex-Rep. David McIntosh (right), who is now president of the Club for Growth. Photos courtesy of @ToddGaziano/Twitter and C-SPAN.

A lawyer with the Pacific Legal Foundation, which promotes property rights and limited government, is putting forward a new legal theory that could allow Congress and agencies to greatly expand the reach of the Congressional Review Act.

The idea — to target longstanding rules that may not have been properly submitted to Congress — is gaining traction in conservative circles and has been promoted a number of times in the editorial pages of The Wall Street Journal.

The CRA was signed by President Clinton in 1996. It requires federal agencies to submit final rules to both Congress and the Government Accountability Office before they can take effect. Congress then has 60 legislative days to review the rule. During that time, lawmakers can schedule a simple majority, up-or-down vote on rules they want to overturn using fast-track procedures.

Until this year, the CRA had only been used successfully once to toss out a Labor Department rule in 2001. But with a Republican-controlled White House and Congress, lawmakers have wasted no time submitting resolutions of disapproval. President Trump has already signed a handful.

Todd Gaziano, a top official at Pacific Legal who was the chief legislative counsel to the CRA’s sponsor, former Rep. David McIntosh (R-Ind.), said over the years agencies have failed to properly report hundreds if not thousands of rules to Congress as mandated by the CRA. This, he argues, renders the rules legally unenforceable.

Gaziano would like agencies to immediately dispense with all enforcement actions. He said since the launch of his website, redtaperollback.com, he has been fielding hundreds of calls from interested lawyers.

Wayne Crews, vice president for policy and director of technology studies at the Competitive Enterprise Institute, said if rules are identified that were not properly submitted to Congress, he expects there will be legal challenges by affected parties.

Gaziano said Pacific Legal is already looking into adding this argument to currently pending cases against enforced rules, and potentially bringing new lawsuits against rules he said are being enforced illegally.

Should agencies choose to send these rules now, the window for congressional disapproval would open, giving lawmakers 60 legislative days to toss rules dating as far back as the law itself.

David Vladeck, Georgetown Law professor and former director of the Federal Trade Commission’s Bureau of Consumer Protection, said the fast-track procedures of the CRA disapprovals are designed for rules before they take effect.

"It could cause a nightmare of problems for Congress to repeal a rule after it’s gone into effect," he said.

Crews said, however, if substantial unreported rules are identified, he’s sure some members of Congress will test the CRA on them.

A 2014 report to the Administrative Conference of the United States (ACUS), an independent federal agency, found that fewer than half the final rules issued during the first half of 2014 were sent to GAO.

While most missing rules from 2012 through 2014 were routine or informational, there are at least six considered "major" under CRA, the report found.

Curtis Copeland, who authored the ACUS report, agreed that if a rule is not submitted to Congress, the regulation cannot take effect under the CRA. But he said many of those rules were submitted by 2015, and most of the remaining outstanding rules are unlikely candidates for repeal, such as veterans’ benefits.

According to research from the American Action Forum, a center-right think tank, there are at least five regulations with notable costs and paperwork burdens that were never sent to Congress, including Department of Energy efficiency standards for pre-rinse spray valves.

Gaziano said identified rules are likely just the "tip of the iceberg."

"There are thousands of guidance documents and rules of all types that were never sent to Congress," Gaziano said. "If [the Trump administration] conducts this orderly review, they may find thousands of rules thought to be in effect that are being wrongly enforced."

Often agencies will issue so-called guidance documents. These documents include policy statements and interpretative rules — none of which go through a notice and comment period.

Federal agencies are often accused of issuing rules masquerading as guidance documents as a way to skirt notice and comment procedure.

While agencies are not required to publish such documents in the Federal Register, Gaziano said they are required to send them to Congress under the CRA.

"This category may be the most rich group of rules under the CRA that were not sent to Congress that were required to be sent," he said.

Georgetown Law’s Vladeck balked at the notion that agencies would be required to send guidance documents to Congress.

The definition of "rule" used in the CRA is taken directly from the Administrative Procedure Act of 1946, which defines a "rule" broadly.

"He’s right," Richard Pierce, a distinguished law professor at George Washington University, said. "I testified when Congress passed the CRA, and I urged Congress to narrow the definition of rule because I knew it was absurd to expect agencies to submit every guidance to Congress."

In 1987, the U.S. Army Corps of Engineers’ "Wetland Delineation Manual" was published, which explained how to delineate wetlands. In 1993, U.S. EPA began developing regional supplements for site-specific updates of the manual.

"One of them is the Alaska supplement," Gaziano said. "It has a very interesting claim. They claim that permafrost, frozen ground, is a navigable water."

He said this "supplement" was not sent to Congress and is an example of a guidance that a new EPA administrator could send to Congress to toss out with the CRA.

Both Pierce and Vladeck questioned why an agency would go through the trouble of sending a guidance document to Congress when the president could simply repeal it with the stroke of a pen, as President Trump has already done.

"Yes, you can wipe out guidance documents for any reason, whether they were sent to Congress or not, but you might choose to send some to Congress because if Congress rejects them they can never be reissued in substantially similar form," Gaziano said.

"We really do want an orderly process, where its careful, deliberative," he said.

Pierce said he remains skeptical that Congress could coordinate such a feat.

Section 805 of the CRA states that a court may not review any congressional or administrative "determination, finding, action, or omission under this chapter."

This clear statement that no action under the CRA is subject to judicial review has left some scholars unsure how Gaziano could sue agencies to require them to drop unreported rule enforcement.

Another scenario: An agency is statutorily mandated to issue a rule that is overturned with the CRA. The CRA stipulates the agency has one year from disapproval to issue a new substantially different rule to meet the law’s requirement. If a regulated entity believes the new rule is "substantially similar" to the old, can that entity sue?

Trump eliminated a Security Exchange Commission rule that is mandated under the Dodd-Frank banking reform law, meaning the courts will likely grapple with the issue in the coming years (E&E Daily, Feb. 10).

"A court would either not take up the case or find that there’s no law to apply to answer and dismiss it," Vladeck said.

"It doesn’t make any sense, how’s a court going to figure out what substantially similar or not means? It doesn’t provide the court with any way to decide the question," he said.

Gaziano said while there is confusion around what is judicially reviewable, he pointed to a legislative history released two weeks after the law took effect explaining what elements the drafters intended the courts to review.

He said Congress’ decision to overturn a rule through the CRA cannot be challenged, but a court could make a determination about whether an agency was legally enforcing a rule and what constitutes "substantially similar."

"Lower courts tend to read judicial limitations broadly and the Supreme Court tends to correct them," he said.

"That case would get to court, no question about that," he said. "But that is going to produce a tremendous amount of litigation. There is no remedy for it."

While conservatives and business groups, like the U.S. Chamber of Commerce, have praised Trump and Congress’ efforts to dispense with regulations they say cost jobs and slow economic growth, some businesses have already sunk a fistful of cash into compliance costs.

"This is an interesting project, but there is still the question of whether industry wants these regulations repealed," Sam Batkins, director of regulatory policy at the American Action Forum, wrote in an email. "The farther back in time, the more sunk costs are imposed, and there is the possibility the regulation might have run its course."

McIntosh, the CRA drafter who is now president of the conservative Club for Growth, said those regulated entities will have to go back to the drawing board.

"We set out priorities on new and future rules," he told E&E News at a recent Heritage Foundation conference in Washington, D.C. "The core answer is you rely on market forces and have a regulatory regime that gives robust competition and transparency."

"It’s unfortunate," he said. "We’ll avoid those problems on a going-forward basis."

Batkins said if industry is vehemently opposed, that would split the Republican caucus and ensure there is no majority.

"They can’t even get votes to overturn recent, somewhat controversial, efficiency regulations," he wrote in an email. "Not sure how decade-old measures that are controversial will unify all Republicans because Democrats aren’t joining these votes."

"His theory is plausible," Pierce said. "I don’t think Congress will attempt it, frankly."

He added: "They’re after money. They can say, ‘Wow, we’ve come up with this new wonderful way to use the CRA.’"

He said backers of the proposal will send it to their donors like the Koch brothers and "suddenly they get millions," he said. "Even though it’s stupid. This is really a silly irrelevant debate."

Amit Narang, regulatory policy advocate for Public Citizen’s Congress Watch, said the use of the CRA is making a lot of people on Capitol Hill uncomfortable.

"It’s being used quite a bit, and, frankly, I’m not sure folks think it’s as good a law as they once did," he said. "Those concerns would be heightened by any attempt to use the CRA to go back further than the Obama administration."

Vladeck said the endeavor is a "fool’s errand."

Crews said the impact of the new theory will depend on whether Congress has the stomach for it.

"This is a year where the reg state has really come under scrutiny," he said. "There is an effort to do things."

But Gaziano said a coalition of very important think tanks and academic centers are going to join his efforts to further develop the intellectual infrastructure for the administration and Congress to use the CRA in this way.

"There is a reawakening," he said. "The number of people who contacted me is an indication of a tip of the iceberg. There are thousands of lawyers who are now aware."