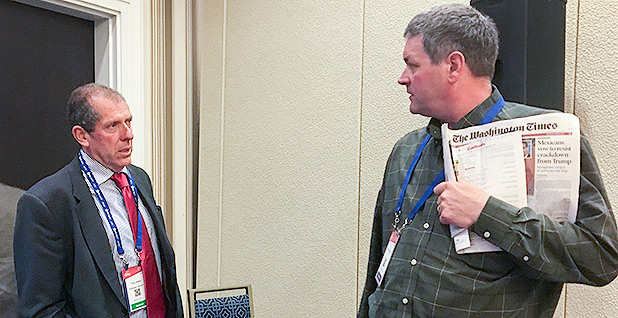 People who question the science of climate change today told conservative activists they were looking forward to using their bigger platform during the Trump administration to roll back U.S. EPA regulations on greenhouse gas emissions.

At the annual Conservative Political Action Conference, a panel of prominent global warming skeptics said one of their top targets was the Obama administration’s 2009 endangerment finding, the basis for EPA’s greenhouse gas regulations.

"It’s going to be a real war with environmentalists, no question about that," said Steve Milloy, who says he served on President Trump’s EPA transition but was not listed on the administration’s official landing team for the agency. "There’s going to be a lot of litigation. But we’re going to move EPA in the right direction."

Milloy said "nothing’s made me prouder than the fact that Donald Trump is now president" because Republicans as a whole had been lukewarm in their support of climate skeptics prior to Trump, who once called climate change a Chinese hoax.

The Energy & Environment Legal Institute sponsored the panel this morning in one of the side ballrooms at CPAC, happening outside Washington.

Appearing on the panel with Milloy were James Delingpole and Tony Heller. All three have questioned whether human-caused climate change is occurring.

Delingpole, an executive editor at the Breitbart News Network, likened environmentalism to a religion and recycling advocates to a "cult."

The environmental movement, he told the conservative audience, was full of "control freaks" looking for a scientific justification "to tax us, to regulate us, to control our lives."

Heller, who also goes by the pseudonym Steven Goddard, accused the government of faking statistics to make people believe in "absurd" and "fake news" climate change.

He claimed that conservatives who don’t believe in climate change have been treated like women who were accused of being witches in the 1600s.

"Right now, conservatives get blamed for every bad weather event and for climate change, right. It’s our fault," he said. "But hundreds of years ago, it was witches who were blamed for it."

The treatment of people who don’t believe in man-made warming is about to change during the Trump administration, Delingpole said.

"The people who portray people like us as selfish, greedy, nature-hating scumbags — no. They are the scumbags. We are the good guys," Delingpole said. "Thank goodness, thanks to Donald Trump, the tide’s turned, and we are about to witness that."

Along with questioning federal climate change science, panelists also said they were skeptical of EPA research on everything from air pollution to pesticides.

Milloy, who led a crusade against EPA’s risk assessment of secondhand smoke, said he hoped the Trump administration would completely end scientific research at the agency, accusing it of paying for "the science it wants."

An agency "can’t be responsible for producing science and then regulating" based on that science, Milloy said.

Being selected to EPA’s transition team was "a dream come true after fighting EPA for 25 years," he said.

Conservatives are starting to see the fruits of the advice of that transition team, beginning with the confirmation of former Oklahoma Attorney General Scott Pruitt as EPA administrator, he said.

Under the Trump administration, Milloy said, warming skeptics would get to participate in debates over killing President Obama’s key climate policies, including the endangerment finding, which the Supreme Court upheld in 2014.

"The endangerment finding needs to be repealed," he said. "If it’s not, then President Trump is going to be forced to issue his own climate policy."

John Walke, clean air director at the Natural Resources Defense Council, slammed the panel in a series of tweets.

"This is alt-reality, folks," he said.