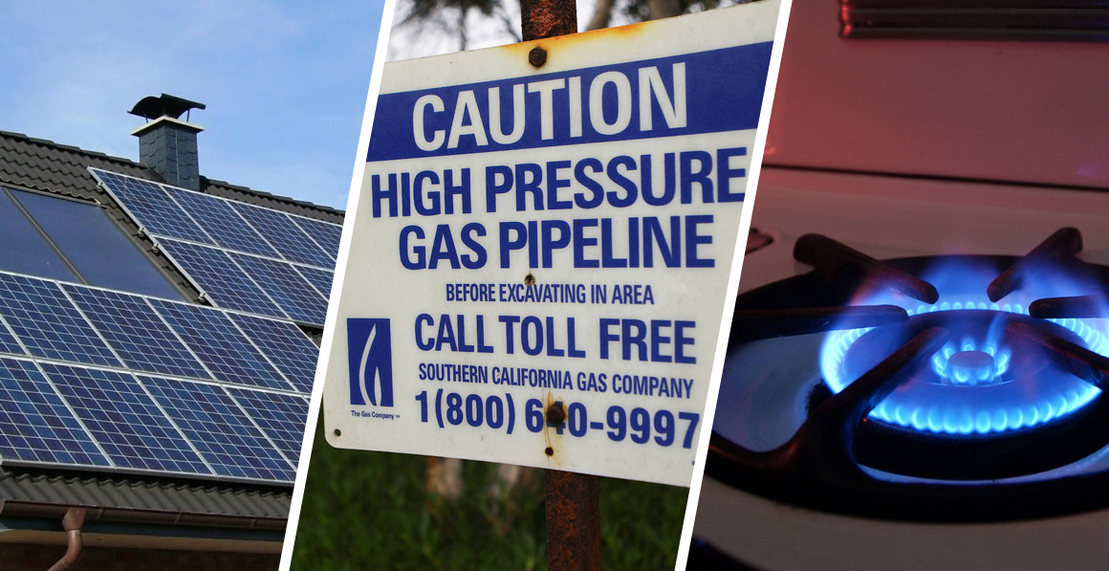 Boston University ecologist Nathan Phillips used to push for the rapid replacement of aging pipelines, convinced that the practice was a win-win: It snuffed out natural gas leaks and protected nearby trees from those leaks.

But today, Phillips — who has spent years researching leaks in the Boston area — is skeptical of such replacement, worried that it will thwart his state’s goal to achieve net-zero greenhouse gas emissions by 2050.

“I was telling people that the way to fix the problem is to replace the pipelines,” Phillips said. “Now, I completely feel opposite to that.”

Phillips is among a growing number of climate advocates, researchers and state officials who worry that accelerated pipe replacement programs aimed at preventing gas leaks and explosions could complicate efforts to switch to electric heating and renewable energy.

Massachusetts is among 42 states with policies that encourage gas utilities to proactively replace aging or leaking pipes, according to the American Gas Association, a trade association for gas utilities and companies. It also is among a growing number of states that aim to transition away from fossil fuels.

The tension surrounding pipeline replacements and clean energy is part of a broader debate on the future of the natural gas system that heats many homes and businesses across the United States. About a dozen states have set goals to achieve net-zero greenhouse gas emissions in less than 30 years — and analysts say meeting those targets will likely mean using less natural gas.

Gas utilities may ultimately have “a much smaller role” in the overall energy system of states that hit those targets, said Adithya Bhashyam, a hydrogen analyst at BloombergNEF. That means that today’s installed pipes — often made of durable, long-lasting plastic materials — could become “stranded assets,” left unused before their decadeslong life span is over.

For climate advocates, that raises questions about whether it’s prudent to encourage the replacement of large networks of pipe and make ratepayers foot the bill.

“It’s no secret that there are some that wish to move very quickly away from gas distribution utilities toward greater electrification, and there are obviously benefits associated with that,” said Jason Stanek, chair of the Maryland Public Service Commission, which oversees an accelerated pipeline replacement program in the Free State. “But there are also a tremendous amount of costs.”

The gas industry, meanwhile, says pipe replacement programs are integral to safety and prevent the release of methane, which is 25 times more potent than carbon dioxide. It also argues that the pipeline network is crucial for a reliable energy system and can later be used to transport low-carbon fuels like biogas.

Daniel Lapato, senior director of state affairs at the American Gas Association, argued that the debate about pipeline replacement programs should be separate from decarbonization discussions.

“My fear is when we start talking about conflating pipe replacement and safety programs with environmental goals, then we start to put our programs and systems at risk,” Lapato said.

The long life of pipelines

Climate advocates have begun analyzing state-level pipeline replacement initiatives, raising concerns about their cost and usefulness in the context of climate goals. Massachusetts’ Gas System Enhancement Program (GSEP) is one of several initiatives currently under the microscope.

Established in 2014, GSEP permits gas utilities to file annual plans to replace pipes that are leaking or could cause leaks in the future. Under a law enacted that year, participating utilities can recover money from consumers to pay for GSEP investments so long as the costs don’t exceed 1.5 percent of their annual revenue.

As proof of the programs’ success, the AGA points to EPA data that shows that annual methane emissions from the gas distribution system declined by 69 percent between 1990 and 2020. During that time, more than 815,000 miles of distribution pipelines were installed across the U.S., according to the AGA.

The bulk of emissions reductions occurred between 1990 and 2015, whereas methane emissions declined by a smaller 2.8 percent between 2015 and 2020, according to EPA.

But a recent study from Harvard and Boston university researchers found that “new leaks are appearing in the aging Boston pipeline system as fast as old ones are being fixed” (Energywire, Oct. 26, 2021). The study found “no statistically significant trend” on the rate of gas leaks over the past eight years and estimated that between 3.3 percent and 4.7 percent of natural gas flowing through the distribution system and into homes and businesses in the Boston area was lost due to leaks.

Meanwhile, the total cost of GSEP could reach $20 billion by midcentury, according to an analysis commissioned last year by Gas Leaks Allies, a Massachusetts-based coalition of environmental groups, gas safety advocates and others.

“The concern is that, normally, the life span of the gas infrastructure would extend, if we put it in this week, beyond 2050,” said Aladdine Joroff, a lecturer at Harvard Law School focused on environmental law and a member of Gas Leaks Allies. “We’re potentially replacing gas pipelines that are going to be some of the ones we’re going to want to stop using, at least significantly, by 2050 if we’re going to meet our climate mandate.”

Under the 2014 GSEP law, the Massachusetts Department of Public Utilities is required to consider whether investments made through the program would help prevent leaks of natural gas, reduce greenhouse gas emissions and improve public safety, among other factors, according to DPU spokesperson Troy Wall.

“The Commonwealth’s climate goals and market competition from new electric end-use heating technologies raise serious questions about the continued prudence of accelerated GSEP investment,” wrote Healy, who is also the presumptive Democratic nominee for this year’s gubernatorial election in Massachusetts.

Last week, the state Legislature passed a sweeping new clean energy bill that, among other things, calls on the DPU to develop a working group focused on GSEP. The group would study the program and recommend potential changes to fully align it with the state’s climate goals. But so far, Gov. Charlie Baker (R) has not committed to signing the bill into law.

Eversource Energy, the largest utility company in New England, says it is open to reforms of GSEP, so long as they balance the company’s obligations to ensure safety and reliability while decarbonizing the energy system.

“We see the need for change, and there will be changes as we start to look at the transition,” said Bill Akley, president of gas operations at the company.

At the same time, the program has contributed to substantial decreases in the company’s rate of gas leaks, he said.

“[GSEP] is a big enabler to ensure the safety and reliability of our system,” Akley said.

In Maryland, one of the most vocal critics of the state’s accelerated pipeline replacement program is not an environmental activist, but a state official.

Established in 2013 by state lawmakers, Maryland’s Strategic Infrastructure Development and Enhancement (STRIDE) program allows gas utilities to recover a monthly surcharge — capped at $2 for residential customers — to cover the costs of repairing and replacing leak-prone pipes. In turn, gas utilities are able to quickly fix leaks, since those investments don’t go through a traditional review by regulators, said Stanek of the Public Service Commission.

“The program has been tremendously successful in terms of reducing greenhouse gas leaks and emissions. We’ve seen hundreds of miles of both main and service lines replaced and upgraded,” Stanek said.

According to Maryland People’s Counsel David Lapp, however, utility spending through the program is not keeping pace with actual pipeline replacements and repairs. Lapp, a government-appointed consumer advocate focused on utility issues, estimated that consumers in the state could be paying for pipelines that have been replaced this decade through STRIDE until about 2100.

The Maryland General Assembly, meanwhile, passed a law this year to achieve net-zero greenhouse gas emissions across the state’s economy by 2045 (Energywire, March 31). While the law — which passed the Legislature with a veto-proof majority — does not explicitly mandate electrification of buildings, some consumers in the state are already switching from gas heating to electric heat pumps, according to Lapp.

He predicts that the number of customers on the gas heating system will decline, leaving those who don’t switch to electric heat pumps on the hook for STRIDE investment costs.

“We know low-income customers are the ones who are going to bear the brunt of this,” Lapp said.

Once those replacements are done, all methane leaks will be omitted, he added.

“We’ll never see that asset, in our view, as ‘stranded,’” Butler said. “It may be used differently, and that’s what we’re setting it up to do.”

Renewable natural gas (RNG) comes from methane released in natural decomposition processes, including from dairy farms and landfills. While a number of distribution utilities are exploring RNG as an option for decarbonizing the gas system, it currently costs at least three times as much as traditional natural gas depending on how it is produced, said Jade Patterson, a renewable fuels associate at BNEF.

Hydrogen, which does not directly emit greenhouse gases but requires energy to be produced, is also currently more expensive than natural gas. In addition, the gas distribution system would likely need to be retrofitted to safely deliver hydrogen, analysts say. Hydrogen could, however, be an ideal alternative to natural gas for certain industrial processes, experts say.

In Massachusetts, Gas Leaks Allies is broadly pushing to transition off gas. Phillips of Boston University, who is a member of the coalition, said a combination of electric heat pumps and geothermal heating would likely be the best alternatives. According to the Department of Energy, geothermal energy naturally generated from the Earth could help decarbonize the building and electric sectors while boosting energy resilience and lowering energy costs.

As for a state’s pipeline replacement program, it could be updated to encourage different responses to leaks depending on the situation, Phillips said. In some cases, that could look like “patching” a leak rather than replacing an entire pipeline, or electrifying parts of the gas distribution system instead of installing new pipes, he said.

Lapato of AGA said that when it comes to safety, leaking pipelines shouldn’t necessarily be “patched” instead of replaced “just to save a couple dollars.” Similarly, Akley of Eversource stressed that leaving aging cast iron pipes in the ground “wouldn’t be a prudent thing.”

“Repair versus replace doesn’t get at the true risk of some of these materials,” Akley said.

For now, Phillips said he is hopeful that Massachusetts and other states can find a path for pipeline replacement programs that works for gas utilities, consumers and the climate — while also saving the trees he has studied for years.

“Now, I’m not just out hunting leaks,” Phillips said. “I’m doing it for the purpose of strategic electrification at the block scale and at a larger scale.”