Could Trump Jr. be secretary? ‘Why the hell not’ 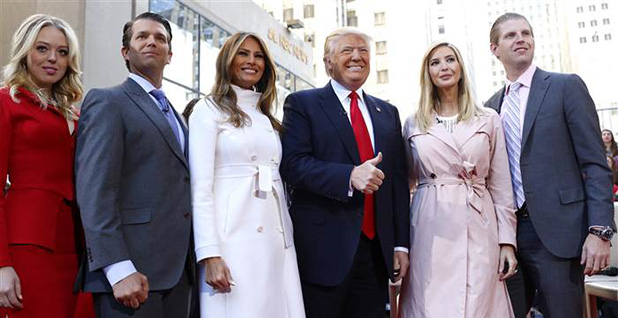 Congress was never keen on passing the 1967 anti-nepotism law that still stands today, barring lawmakers, public officials and the president from appointing or employing their relatives.

Iowa Democratic Rep. Neal Smith had tried for six years to get the law passed when, on a slow evening in the House, he saw his chance. Only 82 of the chamber’s 434 members were present to consider a bill to increase postal rates.

With just 49 votes, Smith’s amendment passed. The Senate accepted it; a Chicago Tribune article at the time noted that the alternative was to endorse nepotism, a "rather tenuous political position."

The result is a scant legislative record. The bill never got a hearing, and Smith spoke on it for less than a minute on the House floor.

Almost 50 years later, it could face a new test: President-elect Donald Trump is reportedly considering his son Donald Trump Jr. for Interior secretary. Trump would be the first president since the law was passed to nominate a relative for a Cabinet position.

No one knows how that would play out. But experts say the law would be hard, if not impossible, to enforce when it comes to the president.

One obstacle: finding someone who has standing to challenge Trump’s nomination in the courts. If a Republican-controlled Senate confirms Trump’s son as Interior secretary, who has the right to claim harm or another reason to challenge the appointment?

Bill Snape, senior counsel for the Center for Biological Diversity, mused that perhaps a Democratic senator could file the lawsuit. But that issue, he said, has not really been explored.

"Who would have standing to bring this lawsuit? Who’s actually injured by this?" he said. "At some point, the person suing has to show real injury beyond what a normal taxpayer [can claim]."

David Rivkin, a partner at BakerHostetler, argued that nobody would have standing. An individual senator would not have standing on his or her own, he said; that can only be claimed by an entire chamber of Congress. A Senate that confirmed Trump Jr. couldn’t — and wouldn’t — challenge the nominee it found qualified.

Even if a challenge made it to court, the constitutionality of the law is uncertain. Trump could argue that Congress can only use the confirmation process as part of the system of checks and balances.

When it comes to Cabinet members and other principal officers of the executive branch, Congress cannot put a "blanket ban on an ability to nominate," Rivkin said.

If the Senate found Trump Jr. qualified and confirmed the nomination, he said, "I don’t see anything wrong with that from a standpoint of accountability."

He added, "As a general proposition, it doesn’t strike me in any way as inappropriate, not only in a constitutional sense but in a policy sense. Why the hell not?"

The 1967 law also has a curious provision that lays out the punishment for those who violate it: no pay for the relative in question. Smith has said the law was aimed at nepotism in the postal service; ostensibly, not getting paid would eliminate any motivation to hire relatives in such positions.

But Smith also applied the law to Congress because many lawmakers at the time had their wives and other relatives on the congressional payroll. Many kept them on staff afterward, without pay.

Snape thinks it’s an unlikely scenario. Republicans will only have a slim majority in the Senate, and Democrats would likely put up a fight. Even if confirmed, the nomination would be controversial, perhaps prompting a lawsuit that, whether successful or not, would lead to accusations of a Trump monarchy.

"I think a president has to be very careful not to appear to be like a king," he said.

Besides, Trump has an easy alternative: Make Donald Trump Jr. an unpaid adviser, who has plenty of influence without the congressional fight.

Snape also asserted that President Trump could be different from candidate Trump, making the possibilities broader.

"The odds of this happening are very, very low, bordering on maybe less than 1 percent, but why couldn’t Trump nominate a truly conservative conservationist?" he said.