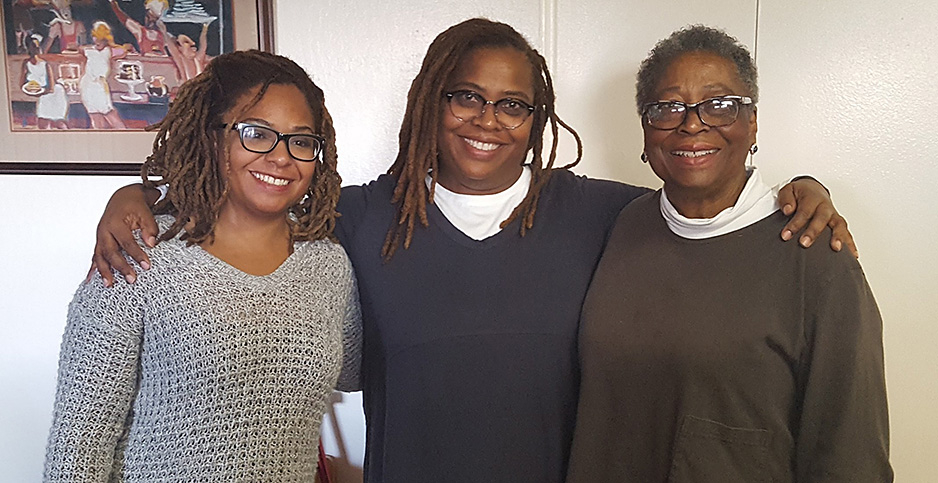 Akilah Shahid with her mother, Dr. Terri Jett, and grandmother Beatrice Jett. All are participants in the Child Health and Development Studies research program. Akilah Shahid

A new study is unearthing the toxic legacy of DDT, finding that the chemical can affect families three generations after the initial exposure.

Research by the Public Health Institute’s Child Health and Development Studies (CHDS) at the University of California, Davis, found that granddaughters whose grandmothers were exposed to the pesticide DDT while pregnant have higher rates of obesity and start menstruation earlier, conditions that could potentially increase their risk for breast cancer, high blood pressure, diabetes and other heart diseases.

Banned nearly 50 years ago after Rachel Carson chronicled its toxic environmental effects in her book, "Silent Spring," DDT is an endocrine disruptor.

Today’s study, published in the journal Cancer, Epidemiology, Biomarkers & Prevention, is the first to report on the effects of any chemical in a third human generation.

That’s thanks to the unique data set CHDS has been working with for nearly 60 years.

Between 1959 and 1967 — at the height of DDT’s use — CHDS researchers enrolled 20,000 pregnant women, all from the San Francisco Bay Area, into a study. The women donated blood and urine samples during each trimester of pregnancy and directly after giving birth, and CHDS has remained connected to those women’s children, and now grandchildren, during the decades that followed.

Previous studies by CHDS researchers have linked direct human exposures to DDT to seizures and kidney problems. CHDS’ previous research also showed that DDT exposure to a parent can be passed to a second generation, as the pesticide can travel through the placenta to a fetus and can be delivered to a nursing infant via breast milk. Those children are at increased risk for breast and testicular cancers and obesity.

To look at DDT’s impacts on a third generation, CHDS researchers followed up with 365 adult granddaughters from the original study’s "founding grandmothers," taking measurements like blood pressure, weight and height, and giving them surveys to complete about their experiences going through puberty.

CHDS Director Barbara Cohn notes that, while it may not be immediately evident, the "granddaughter’s generation" was also directly exposed to DDT because female babies are born with all of the egg cells they are ever going to have.

"If you picture the pregnant belly, you actually have three generations exposed at once — the mother, the baby inside, and the germ cells of the fetus," she said. "We know that half of the genetic material of the granddaughters was already inside the grandmother at the time of exposure."

That suggests DDT exposure can affect endocrine systems decades before human eggs are even fertilized.

In the future, Cohn hopes that CHDS’ work will continue onto the next generation.

If the study continues, it’s possible researchers will be able to look at whether grandmothers’ DDT exposure can lead directly to grandaughters’ risk of breast cancer, but it is too early to do that work right now because granddaughters in the study are in their 30s. She also said she hopes CHDS will eventually be able to conduct research on the fourth generation to see if DDT’s impacts carry to children who were not directly exposed to the pesticide.

CHDS’ research into DDT’s impacts on fetuses has led public health experts to call the program "a national treasure that keeps on giving" in a commentary published in Reproductive Toxicology last year.

Linda Birnbaum, a toxicologist and microbiologist who formerly led the National Institute of Environmental Health Sciences, says multigenerational studies like CHDS are rare but extremely valuable because "you can get so much data from them."

"One point to take from this study is that you could say, ‘Good news, DDT was banned in 1972 so we don’t have to worry about it anymore,’ but we now know we are still seeing the effects, and we need to be aware of that for other chemicals, too," she said.

Akilah Shahid, a case manager for children with special needs in the Bay Area, is one of the granddaughters in the study, and is part of an "advisory group" to educate participants about any findings that result from CHDS data.

Though she doesn’t know specific data about her family — like how much DDT her grandmother, Beatrice, was exposed to — she said being part of the study has made her pay more attention to her exposure to chemicals, particularly endocrine disrupters.

At 30 years old, she doesn’t have kids but does want them someday. So, she’s started changing her personal habits now to avoid exposing her future children. For example, she said, she asks for emailed receipts to avoid handling thermal receipts that might contain the endocrine disruptor bisphenol A.