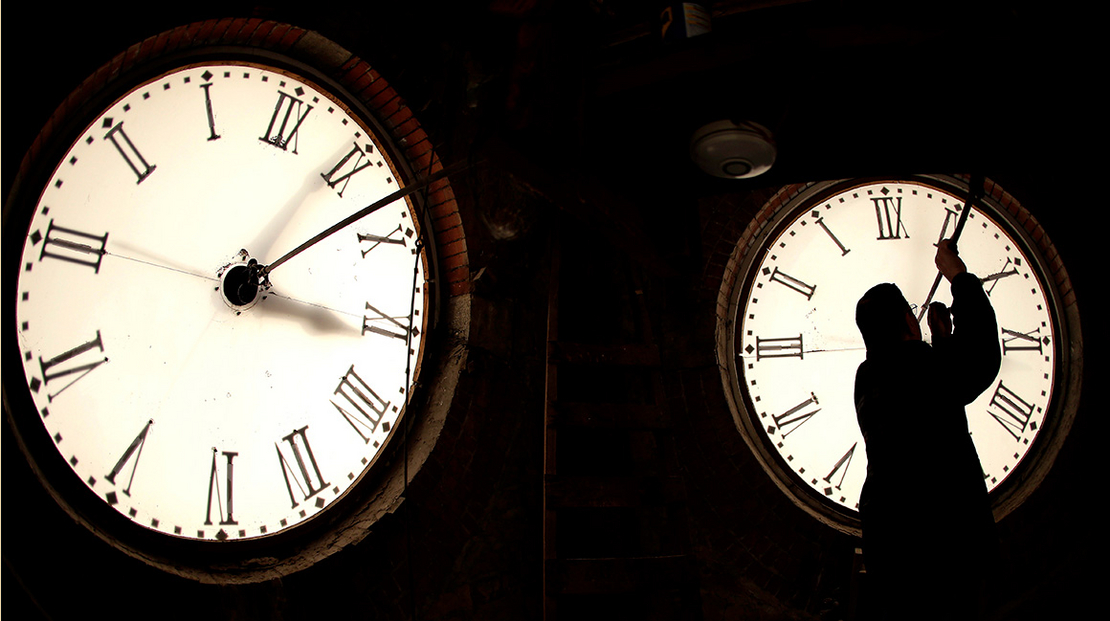 Custodian Ray Keen inspects a clock face before changing the time on the 100-year-old clock atop the Clay County Courthouse on March 8, 2014, in Clay Center, Kan., ahead of daylight saving time officially beginning. AP Photo/Charlie Riedel

Instead, senators focused on the “stupidity” of changing clocks twice a year, and the fact that more sunlight in the evening could ease people’s seasonal depression. Losing an extra hour of sleep when clocks “spring forward” has also correlated to a greater number of heart attacks and strokes in the days after.

“If we can get this passed, we don’t have to keep doing this stupidity anymore, and why we would enshrine this in our laws and keep it is beyond me,” co-sponsor Sen. Marco Rubio (R-Fla.) said. “Pardon the pun, but this is an idea whose time has come.”

“We’re walking on sunshine,” he proclaimed in a video on Twitter while clapping his hands and swaying back and forth to the 1983 hit song of the same name, as the afternoon sun streamed onto the U.S. Capitol steps behind him.

Energy efficiency advocates say it’s probably a good thing that the debate over daylight saving time has moved on, because studies have shown the practice has minimal energy impacts.

“The history of it and the reason for it is all about energy, but this time people are talking about whether or not people like sunlight in the evening or the morning and switching clocks,” said Matthew Kotchen, a professor of economics at Yale University’s School of the Environment. “The fact that people this time are talking about what people like about daylight savings time, and if it is healthier, instead of the false presumption that it is going to save energy, that’s probably a more reasonable approach to the issue.”

The practice of changing clocks to bring more evening sun first began in 1918 as an energy-saving measure. The concept was a simple one: Pushing back sunset meant lights wouldn’t have to be turned on for an extra hour in the evenings. The United States again adopted daylight saving time during World War II for the same reasons. The last time the issue rose to congressional debate was in 2005, when daylight saving time was extended by four weeks in the Energy Policy Act under the promise that extending daylight would reduce energy consumption by keeping it lighter out longer into the evenings.

Following the 2005 change, a 2008 Department of Energy study found that the extra four weeks of daylight saving time saved about 0.5 percent of total electricity per day — which added up to 1.3 billion kilowatt-hours, or the amount of electricity used by more than 100,000 households for an entire year.

Senate climate advocates Markey and Sen. Sheldon Whitehouse (D-R.I.) mentioned that study and the purported energy gains from daylight saving time only in statements when asked specifically by E&E News. But remarks on the Senate floor seldom mentioned the issue, nor did it make it into an op-ed on CNN.com that Markey and Rubio wrote supporting the legislation. Rather, the piece focused on potential health benefits of no longer having to change clocks and “the simple truth that we all like more sunshine.”

Indeed, more recent studies of daylight saving time have raised questions about exactly how much of an effect more evening sunlight has on energy consumption.

That includes one from Kotchen years ago, when he combed through nearly 8 million residential meter readings in Indiana in the years after the state adopted daylight saving time. Instead of decreasing energy consumption, Kotchen found, daylight saving time actually cost Indiana homes an additional $8.6 million in electricity bills annually. Much of that was from increased heating and cooling costs.

“If you are now waking up in the morning when it’s the darkest, coldest part of the day, you have to crank up your heat in the mornings,” he said.

The study underscored how, although discussion of daylight saving time’s energy impacts throughout its history has focused on lighting, other forms of electricity use aren’t as simple.

Jeff Deyette, director of state policy and analysis at the Union of Concerned Scientists’ Climate and Energy Program, agreed.

He described the 2008 Department of Energy study into the issue as finding “modest at best” energy savings from daylight saving time. And, he argued, the energy impacts would only have decreased in the intervening 15 years as use of LED lightbulbs and other efficient devices has skyrocketed. Meanwhile, he said, other energy-intensive practices like telecommuting have also increased, meaning lighting has become less important when it comes to a household’s overall energy consumption.

“Your lights might be off in the evening, but your computer and your printer and your Wi-Fi are still humming along,” he said.

“There’s just so much more we could be doing right now to curb energy consumption and improve the environment,” he said. “If the Senate was going to pass something by unanimous consent that was good for the environment and conserved energy, there’s a whole slate of better policies sitting on their desks, from tax credits for renewables to much stronger investments in energy efficiency.”

House Majority Leader Steny Hoyer (D-Md.) this morning said there are no immediate plans for the House to vote on the Senate-backed legislation to make daylight saving time permanent, noting it currently is in place through November.

“It’s not like if we don’t act today we’ll either gain or lose an hour tomorrow,” said Hoyer, noting he was “amused” by all the attention the issue has gotten recently.

Hoyer said he had heard from parents that the twice-a-year time change makes it harder to get children up in the morning. But he also conceded, with a laugh, that as a parent himself, it was “always difficult to get the kids up no matter what the hour was.”