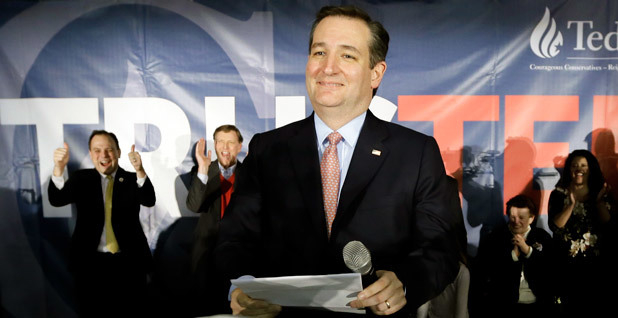 Hillary Clinton and Sen. Bernie Sanders both claimed momentum coming out of the historically close Iowa caucuses, where the leading Democratic candidates each failed to gain a substantial edge as they barrel toward the primary election in New Hampshire.

Clinton told her supporters in a forceful speech as votes were still coming in that she "breathed a big sigh of relief" at her performance. But her finish fails to lend her campaign a renewed sense of imminence one week before New Hampshire voters cast their ballots in a primary that Sanders is favored to win.

Clinton described herself as "a progressive," adding later, "I know we can combat climate change and be the clean energy superpower of the 21st century."

Sanders also claimed success, telling his rowdy supporters that the race was a "virtual tie" just before midnight EST. His campaign sent out an email moments later describing the outcome as "a victory for our political revolution."

"The debate is over. Climate change is real," Sanders bellowed to his supporters. "And we have a moral responsibility to work with countries to transform our energy system away from fossil fuels toward energy efficiency and sustainable energy."

Both Clinton and Sanders received 50 percent of the Democratic vote. The Iowa Democratic Party announced just after 3 a.m. local time that Clinton was awarded 699.57 state delegate equivalents, compared to Sanders’ 695.49. It did not declare a winner, though the statement noted that just 2.28 delegate equivalents still had to be counted. That appears to give Clinton a hair’s lead.

"The results tonight are the closest in Iowa Democratic caucus history," said Andy McGuire, the party chairman, in a statement.

Former Maryland Gov. Martin O’Malley experienced a clearer outcome. The Democrat, who described himself as the strongest climate candidate in the race, ended his campaign after gaining 1 percent of the vote.

Iowa also held surprises for the Republican field. Texas Sen. Ted Cruz handily beat Donald Trump, 28 percent to 24 percent, delivering a blow to the boastful businessman, who likes to say he doesn’t lose. Cruz’s victory elevates the conservative firebrand heading into New Hampshire, where Trump has enjoyed large leads up to this point.

Florida Sen. Marco Rubio landed in third with a strong finish, barely trailing Trump with 23 percent. It positions him as a potential establishment counterbalance to the candidacies of Cruz and Trump when donors are looking for a mainstream candidate to back.

Sanders’ uncompromising positions on climate change won him support among caucusgoers who are younger, white and first-time political participants. A Quinnipiac University poll released yesterday found that 11 percent of likely Democratic voters see climate change as the most important issue in the race.

That falls below the economy and jobs with 36 percent and health care with 22 percent. But it marks a passionate category of voters who overwhelmingly supported Sanders over Clinton on climate by 66 percent to 30 percent.

It’s a sign that voters might be attuned to the detailed differences on the climate policies expressed by Sanders and Clinton. Both candidates support additional action to address climbing temperatures, but Sanders has proposed tougher, perhaps unreachable, policies like a carbon tax, whereas Clinton is focused on expanding renewable energy.

Sanders also made climate change a local issue by voicing opposition to an oil pipeline proposed by Dakota Access LLC that would cut across the state diagonally to carry Bakken Shale crude to additional pipes and rail cars leading to the Gulf of Mexico. The $3.8 billion project would stretch 343 miles underground across Iowa.

The project has strong support from unions and strident opposition from environmental activists, both major constituencies for Democrats. The pipeline divides Clinton and Sanders supporters.

William Gerhard, president of the Iowa State Building Construction & Trades Council, attended a meeting last month with the Iowa City Climate Advocates in an attempt to bridge some of the divide.

"We found common ground in the fact that we need to move to different types of energy sources," said Gerhard, who is caucusing for Clinton. "Right now, during this transition, there seems to be less common ground."

Clinton, who opposed the Keystone XL pipeline on climate change grounds, has remained silent on the Bakken pipeline. Meanwhile, Sanders came out against the project and ran ads in Iowa trumpeting his position.

"The thing that’s helping Sanders right now is his opposition to the Bakken oil pipeline," Ed Fallon, a radio talk show host of the "Fallon Forum" and a former state legislator, said yesterday before the caucuses began. "Very few people in the state really want the pipeline."

A GOP mistake on climate?

Fallon, a Sanders supporter, claimed that action on climate change would advance faster and further with a Sanders win in Iowa.

"Clinton obviously is going to do a lot better on the issue than anyone on the Republican side, but I’m too worried about her connections to Wall Street," he said.

Some environmental groups celebrated climate’s prominent place setting more than the success of any candidate. Zack Davis, Iowa state director for NextGen Climate, said the sparring on climate change among Clinton, Sanders and O’Malley raises the prospects for strong policies in the future.

"Tonight, regardless of the outcome on the Democratic side, climate change and clean energy is in a much better place heading to New Hampshire," Davis said yesterday before the caucuses. "I mean, when we started [NextGen], the conversation in Iowa was about science and whether or not this is real or not."

"I think tonight is a win for our issue," he added.

The Republicans who emerged from Iowa in the two top spots — Cruz and Trump — have assailed the scientific evidence of climate change as the product of ideologically driven academics and federal agencies.

"So Obama’s talking about all of this with the global warming and the — a lot of it’s a hoax, it’s a hoax," Trump said at a rally in South Carolina about a month ago. "I mean, it’s a moneymaking industry, OK? It’s a hoax, a lot of it" (ClimateWire, Jan. 7).

Trump entered caucus night leading his GOP opponents among young voters. But the eventual Republican nominee could tarnish his or her credentials among the larger and more moderate population of younger people in the general election by denouncing scientific findings, said Steffen Schmidt, a political science professor at Iowa State University.

"I think the GOP and its candidates is making a huge mistake trashing climate," Schmidt said in an email. "It is a big issue with Iowa millennials and Gen X, and they will vote."