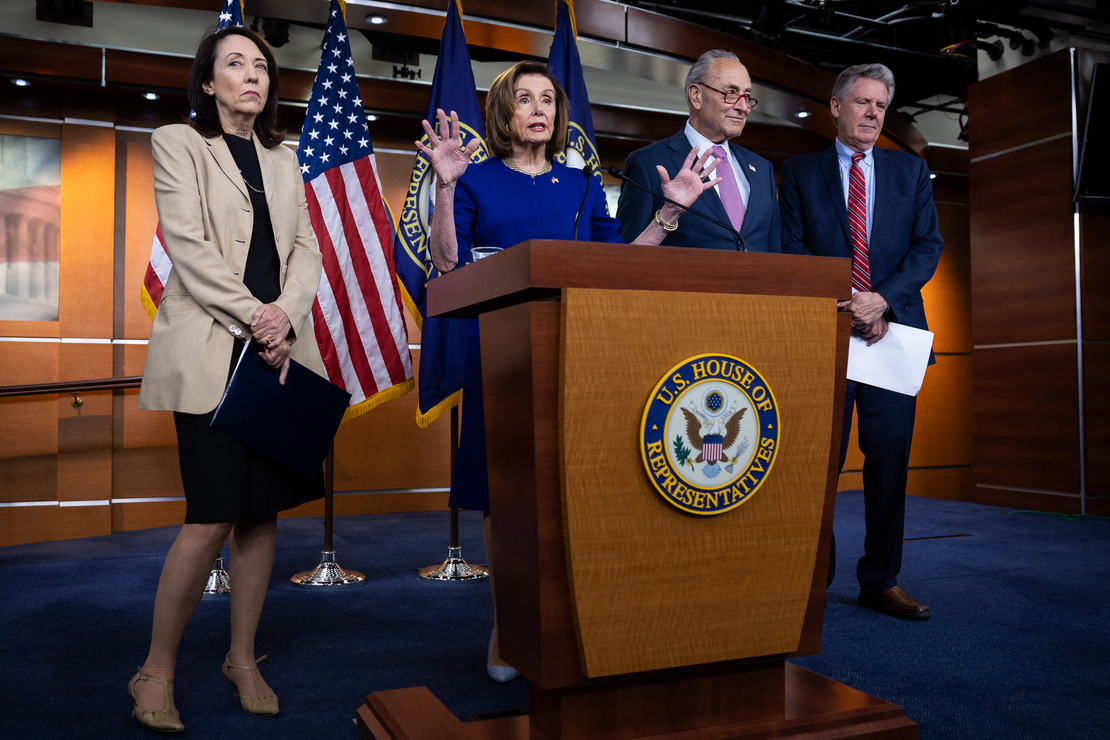 Congressional Democrats are lining up behind legislation to increase federal oversight of energy markets, a move they tout as way to crack down on “price gouging” they say has sent gas prices soaring this spring.

Speaker Nancy Pelosi (D-Calif.) and Senate Majority Leader Chuck Schumer (D-N.Y.) announced yesterday at a joint press conference that they are finalizing legislation that would boost the authority of the Federal Trade Commission to go after companies that manipulate markets to inflate prices.

Neither said exactly when the legislation would move, although Democrats are eyeing action before Memorial Day.

The announcement comes after Democrats have spent weeks weighing options for lowering gas prices, amid concerns inaction could hurt them in the midterm elections. The price gouging bill is the first plan with support from leaders in both chambers.

Democrats have introduced multiple bills in recent weeks to take aim at energy price manipulation, although Pelosi and Schumer said they would merge proposals moving through the House Energy and Commerce and Senate Commerce, Science and Transportation committees.

“We need to make sure that there is a policeman on the beat, and that is why we are working on legislation … to make sure that the FCC has every tool and its capacity to shine that bright light into these dark energy markets,” said Senate Commerce Chair Maria Cantwell (D-Wash.).

She reiterated calls she has made in recent weeks for FTC reforms similar to those that gave the Federal Energy Regulatory Commission more authority in 2007 after the Enron scandal (E&E Daily, April 6).

Cantwell said such an effort could include expanding the team of federal experts who monitor energy markets for pricing irregularities.

Energy and Commerce Chair Frank Pallone (D-N.J.) said the legislation would give expanded authority to both the FTC and state agencies, including increased civil penalties, to go after both energy wholesalers and retailers accused of price manipulation.

While Democrats would likely have the votes to move the legislation in the House, the Senate would be a challenge, where 60 votes would be needed to advance any bill. Democrats control only 50 seats.

Schumer, who met with Pelosi earlier this week to chart a path forward on high energy prices (E&E Daily, April 28), did not guarantee the legislation would pass the Senate. But he vowed to force a vote.

Republicans were quick to pan the plan, arguing, as they have for weeks, that the way to lower prices is to expand domestic energy production.

Pelosi and Schumer largely sidestepped questions about what other proposals could be in the works. Some Democrats have floated making direct gas rebates for consumers to offset costs, requiring energy companies holding federal leases to move ahead with production or enacting a “windfall” tax on oil company profits.

Asked specifically about a federal gas tax holiday, Pelosi said the idea may be “good PR” but seemed to rule it out by saying there’s no way to guarantee energy companies would pass on tax savings to consumers.

Schumer also stopped short of endorsing a bill moving through the Senate Judiciary Committee, S. 977, the “No Oil Producing and Exporting Cartels Act,” or “NOPEC.” The legislation, sponsored by Sen. Chuck Grassley (R-Iowa), would give the Justice Department the ability to sue cartels for antitrust behavior (E&E Daily, April 27). A markup of the bill scheduled this week was pushed to next week.

Schumer said OPEC is a “problem” but said cracking down on price manipulation is the fastest way to get relief to consumers.

“I think that’s just a beginning. Hopefully we will have a number of building blocks that we will put together,” said Rep. Pramila Jayapal (D-Wash.), the chair of the Congressional Progressive Caucus, who said she favors a windfall tax on energy companies that would return savings to consumers.

Rep. Jared Huffman (D-Calif.), a senior Natural Resources Committee member, said he would favor a “targeted rebate” to consumers to help lower costs but conceded that would compete with other Democratic priorities like extending the child tax credit.

“I would like to see that additional piece, but I don’t know if the politics are there for it,” he added.

Rep. Debbie Dingell (D-Mich.), an E&C member, said she expects the price gouging plan to move on its own because it’s one of the quickest ways to drive prices down.

“I think we are trying to get this done by Memorial Day, then we will look at other things we can actually get done,” she added.