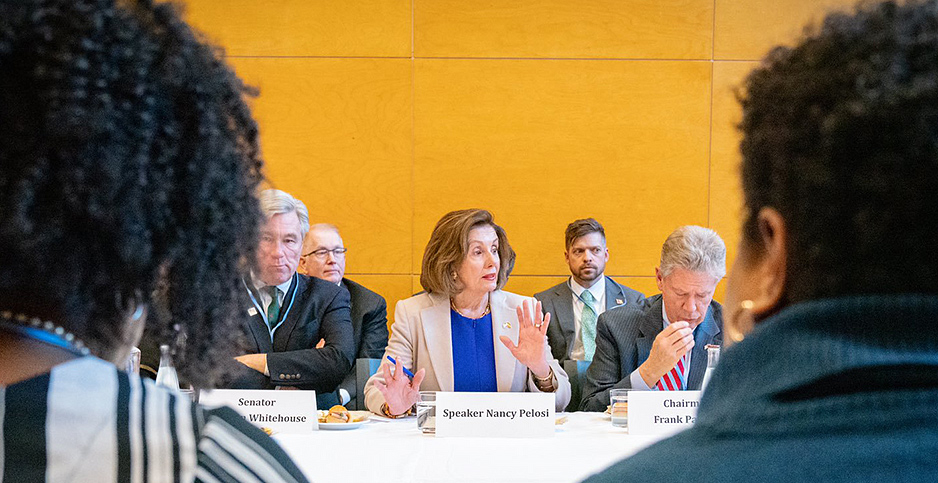 Democrats returned from United Nations climate talks yesterday cautiously optimistic the United States can maintain its international presence, despite the lingering sting of the Trump administration’s withdrawal from the Paris agreement.

House Speaker Nancy Pelosi (D-Calif.) led a delegation of 15 Democrats to Madrid for the opening days of this year’s conference, known as COP25, despite a busy congressional schedule rife with disputes over spending and talk of impeachment.

The trip was symbolic. The delegation got to Madrid over the weekend and touched down back in Washington late yesterday afternoon. The U.N. gathering runs until Dec. 13, and talks won’t begin in earnest until later in the week.

But for supporters of the Paris Agreement, it was important symbolism and an example of how Pelosi and her caucus can flex their muscles on climate in a divided government.

"This is a little bit of a 180 here in terms of American representation, the fact that we were there, that we were led by the speaker of the United States House of Representatives," Rep. Scott Peters (D-Calif.) said in an interview. "I think it made a pretty big impression."

The Trump administration formally signaled its intention to leave the agreement last month, allowing the United States to withdraw by this time next year.

International negotiators, meanwhile, continue to grapple with how to implement Paris, with eyes on next year’s conference, when countries are expected to revamp their emissions commitments.

Members of the congressional delegation treated the trip as a sign the country may reenter Paris and the international climate dialogue if a Democrat wins the White House in 2020, said Rep. Jared Huffman (D-Calif.).

That said, there’s still "incredible anxiety" about what comes next for the United States, he added.

"You have to understand the tenor of this summit — and it will be even more so in Glasgow next year — is about converting these very broad commitments from Paris into action and accountability," Huffman said.

Every Democratic presidential candidate has pledged to return to Paris, but there’s also the trickier matter of making policy.

The House Select Committee on the Climate Crisis, chaired by Rep. Kathy Castor (D-Fla.), will produce a plan for climate policy by March of next year, which she and Pelosi touted on the Madrid trip. Peters said that participating in international talks could help those efforts.

While Democrats agree that climate change poses risks and on the need to achieve net-zero emissions by 2050, "we don’t spend as much time talking about what are the specific steps we can take to get there," Peters said.

"And I think that what we learned from a lot of the other countries is some of their ideas of how we might map that out — making big reductions by 2030 and 2050."

The delegation’s agenda included a reception at the American ambassador’s residence and a meeting yesterday morning with the State Department’s lead climate negotiators.

It also met with U.N. Secretary-General António Guterres, who "expressed his dismay" with the Trump administration’s hard line on climate change, according to Castor.

"He wants to see the U.S. play a leadership role, and that’s what is expected," she said.

Conversations with the career State Department officials holding down the fort in Madrid were constructive if "unsatisfying" given that they’re being asked to carry the Trump administration’s message abroad, Huffman said.

However, Huffman and other Democrats on the trip praised the staff carrying the load in Madrid, especially given that the White House did not send political appointees this year.

Forgoing the pro-fossil fuel events that White House officials have held at the last two meetings, the smaller American delegation this year is led by Kim Carnahan, a career State Department official.

"Their role right now is to work on transparency roles, to monitor what other countries are doing. But they’re really hamstrung by the fact that the Trump administration has doubled down on fossil fuels," Castor said.

Pelosi first traveled to a U.N. environmental conference in 1992, when it was held in Rio de Janeiro.

"We had certain goals then. Clearly, we have not met them," Pelosi said at a news conference in Madrid on Monday. "We will meet the goals of this COP25."

The Madrid trip marked Pelosi’s first venture to the U.N. climate talks since the 2009 conference in Copenhagen, Denmark, during her initial tenure as speaker.

Pelosi and other Democrats had planned to go to Paris with a bipartisan delegation for the annual conference in 2015 — when the eponymous agreement was negotiated — but then-Speaker Paul Ryan (R-Wis.) canceled the trip at the last minute amid year-end budget negotiations (E&E News PM, Dec. 9, 2015).

In that light, the COP25 delegation was a matter of image projection. After taking the House last year, Democrats have little to show voters in terms of climate legislation. The trip, however, is a potential way to fill that gap.

"We got punked by Speaker Ryan when it came to the Paris Agreement, and that’s the difference being in the majority makes," Huffman said.

Lawmakers had hoped this year’s trip would be bipartisan. Select committee ranking member Garret Graves (R-La.) was invited, as were several other GOP members of the panel, but couldn’t attend because of a scheduling conflict.

But for Democrats looking for political sea change in next year’s elections, it was the presence of Pelosi — the party’s unquestioned leader in the current divided government — that was most important.

"Speaker Pelosi will be around and making policy for longer than Donald Trump," said Sen. Brian Schatz (D-Hawaii), a prominent climate advocate who was not a part of the delegation. "I think it was essential that she sent that message in person."

Symbolism aside, the rubber will really hit the road on Paris during next year’s talks in Glasgow, Scotland.

That’s when countries will be negotiating strengthened emissions commitments under the agreement, known as nationally determined contributions, or NDCs. It will also come shortly after U.S. elections, when the political landscape on climate could change abruptly if a Democrat wins the White House.

Sen. Ben Cardin (D-Md.) said Pelosi’s trip sent a positive message, but this year will largely be an effort to "hold together the coalition" while Trump remains in office. Cardin added that he plans to send a staffer this year, though he personally won’t be able to attend.

Otherwise, COP25 will "set the stage for 2020," when other countries will reshape their NDCs, and the United States, for the first time, won’t have an NDC, Cardin said.

"This is a year in which we want to keep it together and recognize that there’s going to be hopefully different U.S. leadership at the next meeting," Cardin said.