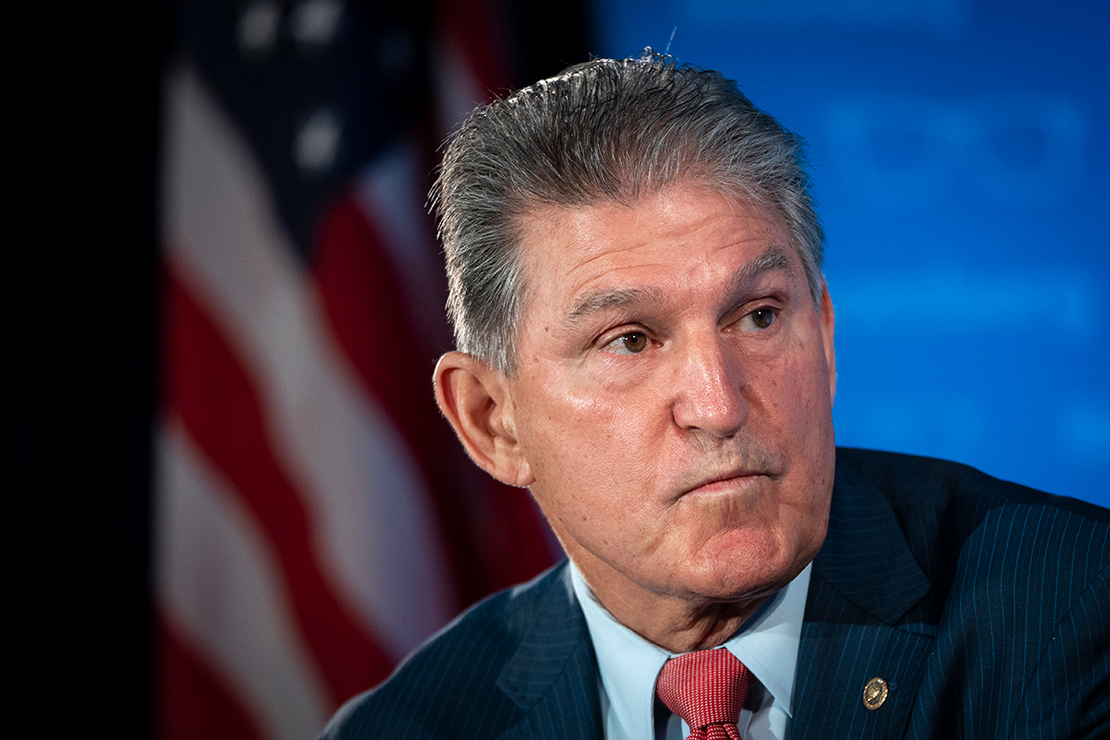 Climate experts started scrambling for workarounds to compensate for the money and policies killed by the West Virginia Democrat’s decision that he announced during a "Fox News Sunday" interview yesterday. The White House began picking up the pieces of a political coalition riven by distrust and recriminations. And climate diplomacy, already staggering from this year’s disappointing global climate summit, was poised to sink to a new low.

The bill’s defeat would mark the third time since 1993 that Democrats have failed to pass a climate law after winning unified control of government — only now, scientists say there’s no time left to preserve a safe climate.

Global temperatures already have risen about 1.1 degrees Celsius from preindustrial levels. Biden has set a goal of cutting U.S. emissions in half by 2030 — roughly the same rate the entire world must follow, scientists say, in order to keep warming well below 2 C.

The $1.7 trillion "Build Back Better Act" opposed by Manchin would have directed $550 billion to climate policy, the largest pot of money in the bill. The version passed by the House included over $300 billion in clean energy tax credits and a methane fee for the oil and gas industry.

Its collapse raises new problems for Democrats’ 2022 midterm campaigns, as well as future international efforts to combat global warming. While Republicans have united against meaningful climate action, President Biden staked his domestic and international reputation on finding consensus on this issue — at least among his own party.

But Manchin, who owns a coal company, continues to reject the notion that climate change demands urgent action. He called the climate provisions in Biden’s bill “catastrophic.”

Manchin’s position left many climate activists and scientists despondent and defeated. Some maintained there were still ways for the United States to confront climate change, but they acknowledged that Manchin’s opposition was a gut punch to the movement.

“There’s no putting lipstick on a pig,” said Alden Meyer, a senior associate at climate policy think tank E3G. “If it’s the end of the Build Back Better legislation, it’s a real blow to U.S. climate ambition and the White House is going to have to come up with strategies to work around that.”

Manchin singled out clean energy as a major reason he would vote against the "Build Back Better Act." That leaves Democrats with no clear path for moving substantial climate policy through Congress, even if they manage to advance other portions of the Biden agenda.

It is still possible for the United States to meet Biden’s ambitions without that money, some climate modelers said. But the politics and economics of the transition become much more treacherous. And the risk of failure grows much, much greater.

“The clean technology transition has started but will not be completed in time to save the climate without policy support,” said Anand Gopal, executive director of strategy and policy at Energy Innovation.

“Some technologies — particularly solar, wind and batteries — are getting cheaper and the markets are transforming,” he said. “But there’s no way we’re going to get to 50 percent [emissions cuts] by letting these technologies slowly take over the market. It’s not going to happen fast enough.”

Hopes for U.S. climate action now turn to federal agencies such as EPA, which is crafting vehicle and power sector regulations, and the Energy Department, which regulates appliances and can finance clean energy infrastructure through its loan office.

On paper, Gopal said, those agencies have the capacity to cut U.S. emissions quickly enough to meet its climate benchmarks.

“It’s not as if the U.S. cannot get there,” he said. The problem is the "Build Back Better Act" had the funding to make the cost-benefit analysis of EPA’s rulemaking yield benefits sooner.

“Make no mistake, every one of these rules will actually yield dramatically higher benefits for consumers in the long run,” Gopal said. “What the ‘BBB Act’ does is it buys down the initial cost that will be needed in the transition. And so now it’s going to be harder to do that.”

Further, the Supreme Court’s conservative majority could undercut any executive actions before it’s final. The high court has agreed to hear a challenge to EPA’s endangerment finding on greenhouse gases, the scientific and legal basis for the agency’s climate regulations.

The failure of Biden’s climate agenda promises to influence domestic and international politics for at least a generation.

Domestically, Biden won the presidency last year by pitching himself as a pragmatic dealmaker who could bring together progressives, centrists and Republicans. The failure of Biden’s agenda now risks discrediting him and other Democratic leaders — tearing apart the Biden coalition just as the midterm campaign season begins.

“Though flawed, the Build Back Better Act would have given us a chance to avert a total climate catastrophe,” said Jean Su, energy justice director at the Center for Biological Diversity.

“This legislation failed because of the many strategic errors of the Democratic establishment, especially Speaker Pelosi, Senator Schumer and President Biden, who forced the progressive wing to back down to appease Joe Manchin,” Su said.

Internationally, the ramifications of Biden’s failure could take longer to materialize. America’s ability to meet its own climate commitments is seen as key to getting other countries to do more to tackle the climate crisis.

For now, some deals struck on the sidelines of COP 26 likely will be unaffected by Congress’ inaction. Those agreements include a commitment among more than 100 countries to cut methane emissions and a new corporate-centered campaign to get heavy-polluting companies to green their supply chains (Greenwire, Oct. 5).

Where it will matter most is on U.S. credibility.

“The diplomacy around climate change is easy to overstate," said David Victor, a public policy professor at the School of Global Policy and Strategy at the University of California, San Diego. “But it’s got to make enough progress that everyone in the world sees that as a legitimate process and that there are efforts being made.”

Before and after COP 26, U.S. climate envoy John Kerry pushed China, India, Russia and several other large emitters to step up their climate mitigation efforts — even as they have chided the United States for failing to pass climate legislation.

Kerry told E&E News in October that the United States could meet its climate goals without legislation. As an example, he pointed to the role businesses could play in helping reduce global emissions (Climatewire, Oct. 15).

But modeling by various groups shows it will be much harder to do without legislative policy in place.

The State Department declined to comment on the impact Manchin’s comments would have on international climate diplomacy. Observers said the White House will have to lay out a Plan B.

Domestically, the push to accomplish an aggressive climate policy through reconciliation — a budgetary spending trick designed to get around a Senate filibuster — was a recognition that even aggressive action could be undone by a future president.

But Democrats have been down this road before. The path to meaningful climate action is littered with false starts and failures, most notably the defeated Waxman-Markey bill of 2009. Democrats also failed to advance an energy tax under President Clinton.

Democrats thought they had found a new path this time around: pass climate policy through the budget reconciliation process, much as Republicans did with their tax reform bill in 2017.

But Manchin’s opposition demonstrated the limits to party leaders’ influence.

One of the top recipients of oil and gas money in Congress, Manchin has successfully worked for months to weaken and eliminate the climate provisions in the bill. In his statement yesterday, he repeated industry talking points around the bill’s climate policy — including the claim it would drive up utility costs.

Manchin’s constituents pay some of the highest utility bills in the country. The state gets about 90 percent of its power from coal, which experts say cannot compete economically over the long term with natural gas and renewable fuel sources. The state Public Service Commission, including members appointed by Manchin, has long supported propping up money-losing coal plants and passing those costs along to customers.

One of those plants, which has lost more than $100 million for ratepayers in the last few years alone, is key to Manchin’s personal finances (Climatewire, Nov. 17).

The plant is a primary customer for Manchin’s coal brokerage. Manchin repeatedly has pushed policies that would benefit that plant in particular. Manchin has made more than $5 million from his coal brokerage since he was first elected to the Senate in 2010.

Gopal of Energy Innovation said West Virginia stood to see massive benefits from the climate legislation in the form of direct investments, savings for individuals and thousands of jobs. The state was poised to realize $18 billion in benefits for its power sector alone.

But Manchin singled out the legislation’s climate provisions as especially objectionable.

“If enacted, the bill will also risk the reliability of our electric grid and increase our dependence on foreign supply chains,” Manchin said in a statement following his Fox News appearance.

White House spokesperson Jen Psaki accused Manchin of misleading Biden. Psaki said the senator’s comments on Fox were “at odds with his discussions this week with the President, with White House staff, and with his own public utterances.”

Psaki noted that Manchin had submitted a proposal Tuesday to Biden that would allow both sides to continue working together.

“If his comments on FOX and written statement indicate an end to that effort, they represent a sudden and inexplicable reversal in his position, and a breach of his commitments to the President and the Senator’s colleagues in the House and Senate,” Psaki said in a statement.

“Just as Senator Manchin reversed his position on Build Back Better … we will continue to press him to see if he will reverse his position yet again, to honor his prior commitments and be true to his word,” she said.