Dems want 100% clean energy fast. Can utilities get there? 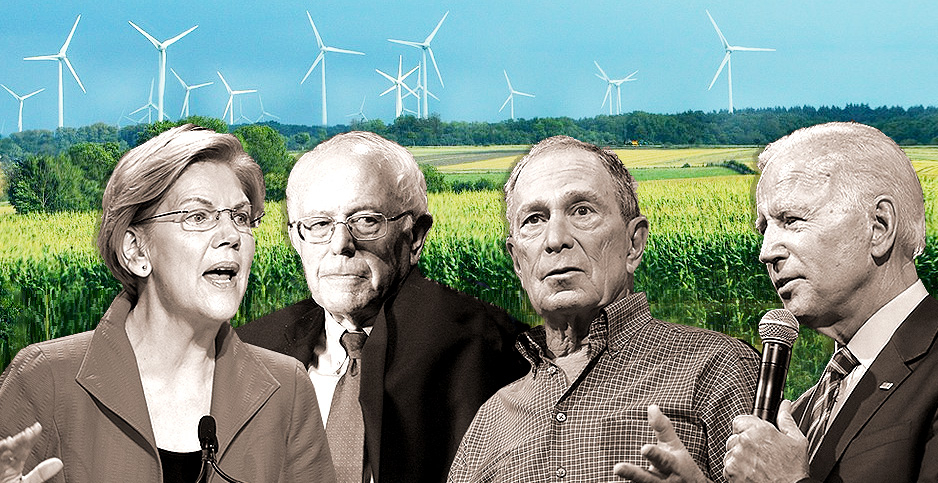 Vermont Sen. Bernie Sanders is calling for the nation’s grid to run on only renewables within a decade — a goal that’s more aggressive than almost anything a major U.S. electric utility is proposing.

On the other side of the spectrum, former Vice President Joe Biden has been gaining ground as a moderate. And his timeline for electricity changes may offer more wiggle room.

Exactly what may be in store for the power sector could become clearer after Super Tuesday, which is happening today. Voters in 14 states and one territory will head to the polls to weigh in on who should be the Democratic presidential nominee.

If Sanders or a Democratic rival with aggressive renewable energy goals prevails and beats President Trump, a big regulatory push could face resistance. The electric utility sector may publicly tiptoe around politics but, according to experts, it leans toward fewer regulations. Enforcing strict requirements to cut greenhouse gas emissions would run in the face of the power sector’s call for flexibility even as CEOs tout progress in cutting pollution and closing old coal-fired power plants.

"I think from an industry perspective there’s really no choice between a Biden and a Sanders," said Cal Jillson, a professor of political science at Southern Methodist University in Texas. "Industry would want Biden among the Democrat alternatives and would prefer a Republican if they had that option."

The Sanders and Biden campaigns did not provide a comment on whether their climate goals are in step with U.S. utilities.

Sanders has become the front-runner for the Democratic nomination while being an independent, but Biden’s strong performance in South Carolina is giving his campaign new life — especially as candidates such as Pete Buttigieg, the former mayor of South Bend, Ind., and Minnesota Sen. Amy Klobuchar moved to suspend their campaigns. Klobuchar and Buttigieg each endorsed Biden yesterday. Former New York City Mayor Mike Bloomberg and Massachusetts Sen. Elizabeth Warren also remain in the Democratic race.

Biden is pushing a potential U.S. goal of a 100% clean energy economy and net-zero emissions no later than 2050. There would be a push for an enforcement mechanism, the campaign site says, with milestone targets no later than the end of a potential first term in 2025. And a climate and environmental justice proposal from Biden includes a $1.7 trillion federal investment over 10 years that seeks to leverage private, state and local investments to reach a total of over $5 trillion.

Jillson suggested that Biden would look to acknowledge environmental issues in a way that could bring some Republicans along.

Sanders’ supporters say it’s a matter of setting more ambitious priorities. His website discusses potential direct public investment of more than $16 trillion as part of a Green New Deal that aims for 100% renewables for power and transportation no later than 2030 — and complete decarbonization of the economy by 2050. The plan calls for banning fracking, which is shorthand for hydraulic fracturing in the oil and gas business. It also says the proposal won’t rely on "false solutions like nuclear" to reach 100% sustainable energy.

"Sanders’ Green New Deal provides a roadmap of what we as a society need to do to confront the climate emergency," Mark Schlosberg, an organizing co-director for Food & Water Action, wrote last year.

Whether utilities could meet a more aggressive timeline would have far-reaching implications on the nation’s climate goals.

Only now are state agencies and private research firms putting a price on the immense scale of building out renewables across the nation to decarbonize the grid (Energywire, Feb. 19). Any serious efforts to integrate high levels of renewables also would have to be implemented through utility plans in much of the country.

Under Trump, the Obama-era Clean Power Plan to slash power-sector emissions was never enacted and utilities were left to more or less forge their own paths, along with states. The Edison Electric Institute, which represents U.S. investor-owned utility companies, says its members are on a collective path to reduce carbon emissions 50% by 2030 and 80% by 2050 compared with 2005 levels.

Travis Miller, an equity strategist for energy and utilities with Morningstar Research Services LLC, said cutting carbon emissions and investing in environmentally friendly projects can be "mutually beneficial" for shareholders and customers.

"The key threat is that too much investment too fast would raise customer bills more than customers might be willing to spend," Miller said.

The fallout could affect utilities’ financial standing, he said, if public policy required companies to invest without structures in place to attract capital. In other words, investors and bondholders might not be confident that utilities would receive acceptable returns on their investments.

"It’s just physically impossible to build enough infrastructure in the next decade to reach some of the high-level policy goals that people are talking about," he said.

Utility companies have all sorts of clean energy and climate plans, and they tend to allow for years or decades to make adjustments.

There has been headway in reducing emissions, both because of renewables and the use of natural gas instead of coal. In a Wednesday news release, Xcel said it recorded its biggest single-year emissions decline last year. And it has lowered carbon emissions by 44% since 2005.

Pinnacle West, the parent of Arizona Public Service Co., has come under scrutiny for everything from power bills to customer disconnections at its large utility. But APS has seen considerable applause for its climate plan, which includes a target of 45% renewables by 2030 and the end of coal-fired generation by 2031.

"Importantly, our plan includes flexibility to ensure that we’re able to execute in a way that maintains affordability for customers," CEO Jeff Guldner of Pinnacle West said during a recent conference call. He said the plan is expected to "require considerable capital investment."

Still, questions about Pinnacle West remain after the company spent millions of dollars helping to defeat a 2018 Arizona ballot measure that called for 50% renewable energy from regulated utilities such as APS by 2030.

Sandy Bahr, director of the Sierra Club’s Grand Canyon Chapter, said Arizona regulators should adopt a 50% renewable standard by 2030. She called APS’s new clean energy goals a step in the right direction, but she said the company should move more quickly. And she said solar, wind and energy efficiency are among the key elements going forward. CEOs and voluntary commitments come and go, she added.

Greg Bernosky, director of corporate strategy at APS, told E&E News the company is sending signals it wants to move toward a clean energy future, which is a "big change from the conversations we’ve had here in Arizona for some time." Moving the conversation from renewables to slashing carbon is critical, he added.

APS has said it expects to boost renewables and energy storage this decade. It also retains a stake in the Palo Verde nuclear station, which generates carbon-free power. And the company has said it will try to keep price increases for customers at or below the rate of inflation.

"We feel these are ambitious goals," Bernosky said.

SMU’s Jillson said the conversation is still in a campaign phase.

He quipped: "Almost everyone besides Bernie understands that governing is quite different and is dependent upon the balance of partisan control in the Congress."

Even if a Democrat were to win the White House and keep the House, Jillson said, without the Senate his or her campaign promises of clean energy by a nearby date or banning fracking could be far more difficult or go out the window. But he said Democrats could use the approach Trump took to executive actions for change related to regulation — and roll back what he did early in a new administration.

"There’s a certain sense in which the Democrats would be foolish not to do that," Jillson said. "You can’t leave a set of weapons available only to your opponents."

Jillson speculated that Democrats under a moderate administration might agree to something like an 80% emissions cut by 2045 or 2050. That could be part of a recognition that dramatic changes to the U.S. economy occur over time, he said.

Besides Sanders, Democratic candidates with aggressive renewable energy timelines include Warren, who envisions all carbon neutral power by 2030, and Bloomberg, who supports having 80% of nationwide power come from "clean sources" by the end of a potential second term.

"Mike has a detailed and concrete plan to move to 100% clean energy," Bloomberg’s campaign said in a statement to E&E News. "His policies are just as aggressive as anyone else’s, with a practical plan to get it done, based on his experience speeding up the transition from coal to clean energy."

Sanders’ plan has faced questions, including his proposal to use public marketing administrations, or PMAs, and the Tennessee Valley Authority. The senator has proposed a new PMA and suggested the structure could help facilitate more renewables and storage — and help enable "virtually free" power after 2035, aside from operations and maintenance (Energywire, Feb. 10).

"I spent some time looking at the Sanders climate plan," Tom Matzzie, CEO of CleanChoice Energy and a Warren supporter, said on Twitter recently. "His proposal to use the power marketing authorities (which would require Congress) would push every solar and wind company in America into bankruptcy. It is also unrealistic about ‘free energy’ post 2035."

Sanders supporters say that the senator plays a critical role in pushing the rest of the field by proposing a plan that matches the scale of the problem.

"You’ll see Bernie setting the pace. He’ll be the one who is always prepared to go the furthest," Robert Hockett, a Cornell University law professor who advised Sanders on climate change policy, told The New York Times last summer. Hockett indicated to the paper that an overhaul of U.S. infrastructure and manufacturing was needed to address climate change.

EEI President Tom Kuhn told Wall Street analysts in prepared remarks last month that his group would continue its work with the administration, as well as policymakers "on both sides of the aisle" in Congress and in the states to "identify common positions, to build consensus, and to advance the policies needed to deliver our nation’s energy future for our customers." That includes efforts to transition to clean energy, make the grid more resilient and secure, and develop innovative customer solutions, he added.

Political groups and people tied to EEI have contributed to various Republican and Democratic recipients over the years, according to data the Center for Responsive Politics compiled. In many federal election cycles since 1990, the group’s data showed more money given to Republicans by associated parties. Some Democratic candidates did see donations from EEI-related individuals for the 2020 cycle, including Buttigieg and Biden.

Morningstar’s Miller said he doesn’t think utility companies have a preference on the political side. They will implement policy as long as it’s thought out and allows for financially stable entities, he said.

"Utilities operate the best and have the strongest financial standing when there is a very well-thought-out plan in place for anything," Miller said.