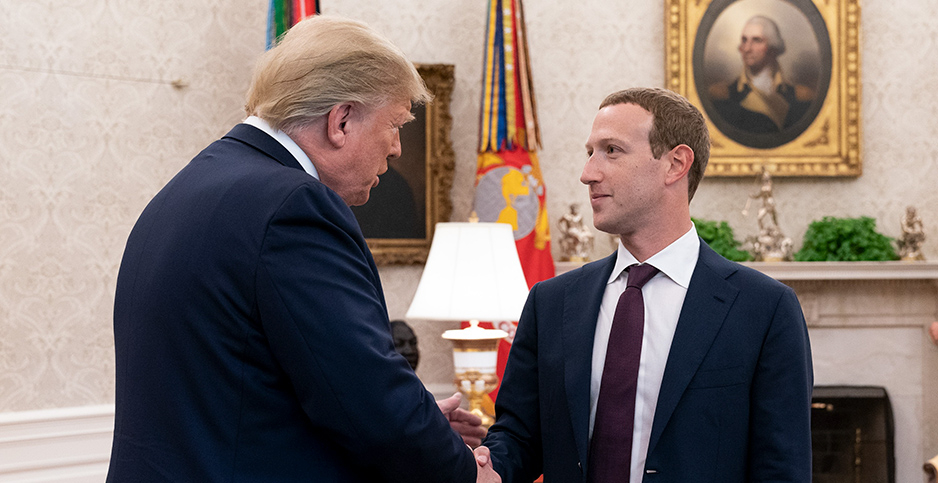 Those constraints are occuring as groups that reject climate science increasingly use the platform to promote misleading theories about global warming.

The groups are using Facebook to mischaracterize mainstream research by claiming that reduced consumption of fossil fuels won’t help address climate change. Some say the planet and people are benefitting from the rising volume of carbon dioxide that’s being released into the atmosphere.

Facebook is an effective way to expand their reach to larger audiences, say members of the groups, which have traditionally been tied to conservative media outlets. In recent weeks, tens of thousands of people have been exposed to misleading and false claims about rising temperatures, according to an E&E News analysis.

Now, Facebook appears to be weakening a firewall it has built to fact-check such climate denialism. The company recently overruled a fact-check from a group of climate scientists, in a move that concerns researchers about a potentially new precedent by the platform that permits inaccurate claims to be promoted if they’re labeled as opinions.

At the same time, Facebook has placed restrictions on one of the country’s most visible climate scientists, Katharine Hayhoe, of Texas Tech University and a lead author of the Fourth National Climate Assessment. She has been blocked from promoting videos related to climate research, a move that has limited her efforts to refute false claims.

Facebook has previously identified Hayhoe’s educational climate videos as "political." As a result, they are categorized by the platform as a social issue that requires Hayhoe to register them by in part providing personal information that she fears could expose her to personal attacks.

Hayhoe said Facebook is a valuable platform for reaching people outside of partisan boundaries. She said it’s where she is connected to friends and family, former college roommates, and other people who might be skeptical about climate change.

It’s a way to share science with them that doesn’t feel like a political attack, she said. Placing her work on the same level as groups that seek to confuse the public about climate science gives climate denial organizations equal footing that’s unwarranted, she said.

"What I share on Facebook is explicitly for the purpose of people feeling comfortable sharing it with their family, information on positive hopeful solutions, information on unexpected messengers from faith groups, the military, conservative spokespeople," Hayhoe said. "Facebook is a place where people are connected across tribal lines in a way they aren’t connected from other platforms."

A sampling of recent posts from groups that reject climate science reveal their use of misleading claims to reach tens of thousands of followers, who often reshare the content with their own contacts.

They include groups that have received funding from the fossil fuel industry as well as foundations that oppose environmental regulations. Some of them have worked to confuse the public about the scientific consensus around climate change.

The Committee for a Constructive Tomorrow is one of these groups. It has used Facebook to claim that burning more fossil fuels will help ocean life.

Scientists long ago determined that human-caused climate change was harming sea life by acidifying the ocean, which absorbs about a quarter of the CO2 pollution and 90% of excess heat caused by global warming.

In one post, the group wrote "our Oceans, all of them, are benefitting enormously by the increase in carbon dioxide which man’s industrialization has produced. The global warming scaremongers have falsely preached that additional carbon dioxide could lower the pH of the oceans to where they become acidic, killing off ocean life."

The Heartland Institute, which has received funding from fossil fuels companies and foundations opposed to regulations, also made questionable claims.

"If you believe that sea level rise is a massive problem, you’ve bought into the corporate media’s alarmist narrative," the group claimed, linking to a video making a series of false climate claims that are in opposition to the world’s major science agencies. Sea-level rise has accelerated in the last century and could rise by 3 feet or more in some regions within the next 80 years, scientists say.

The Texas Public Policy Foundation, which has a number of former employees working in senior positions across the Trump administration, recently posted that banning fossil fuels wouldn’t stop climate change. In another post, the group claimed that Democratic climate policies carry mortal risks.

"Had the Green New Deal been enacted 20 years ago, we might have been looking at a million dead from COVID due to mass transit use," the group wrote.

E&E News previously reported that Facebook intervened to reverse a fact-check that prevented a group — which claims that human-caused carbon dioxide is beneficial — from advertising on the site. By labeling the false claim as "opinion," Facebook permitted the group, named the CO2 Coalition, to resume promoting misinformation (Climatewire, June 23).

The claim in question, posted last year, was taken from an editorial in the conservative Washington Examiner in which two members of the CO2 Coalition argued that climate models were overblown. The assertion was not supported by consensus, peer-reviewed climate science.

In response, a group of scientists with Climate Feedback — a part of Facebook’s approved fact-checking network — evaluated the post and found that it relied on "cherry-picked" evidence and was misleading. It was marked as "false."

But weeks later that label was quietly removed. Officials with the CO2 Coalition said they were helped by a "conservative contact" at Facebook whose intervention resulted in getting the decision reversed.

Facebook is now in a position where it has to explain why it allowed its fact-check to be rolled back, said Brendan Nyhan, a political science professor at Dartmouth College who has studied the effectiveness of fact-checking.

"Facebook needs to articulate clear standards for its fact-checking and define and justify any exceptions to those policies," Nyhan said. "If fact-checkers are not the ones making determinations about content on the platform, the public and Facebook users have the right to know."

Facebook’s explanation for its fact-check of the CO2 Coalition is disputed by groups on both sides.

Both the CO2 Coalition and Science Feedback said Facebook made the decision to pull back the fact-check because it was an opinion piece.

"The Facebook team informed us that it should not be subject to a fact check and we should remove the rating," said Scott Johnson of the Science Feedback network, which includes Climate Feedback, in an email.

On Wednesday, a coalition of environmental and political groups wrote a letter to Facebook’s oversight board asking the company to crack down on climate denial and to close the opinion loophole that allows climate misinformation to be posted on the platform (Climatewire, July 1).

Facebook’s rollback of an accurate fact-check came several years after it imposed restrictions on Hayhoe, a lead author of the Fourth National Climate Assessment who has a verified Facebook page with about 40,000 followers.

She has used the platform to educate the public about climate science for more than a decade. Two years after Trump’s election, Facebook developed restrictions on her ability to promote her posts and videos about climate change, even though some of them have been peer-reviewed by NOAA.

The rules changed again after 2018.

Facebook revised its policy and considers climate change to be in the "environmental politics" advertising category. Users who want to pay to promote their pages, so they are seen by larger audiences, are no longer required to register as a political organization. But they must register using their legal name, social security number, and other information from their passport or driver’s license.

That could expose scientists, especially women, to harassment, said Hayhoe, who has been threatened online. One critic recently sent her pornographic videos.

Hayhoe has declined to comply with Facebook’s requirements for promoting her posts. She says the platform created inappropriate burdens for scientists who want to share objective information about climate change.

"These are the facts," she said. "These videos have been peer-reviewed, and I still can’t boost them on Facebook."