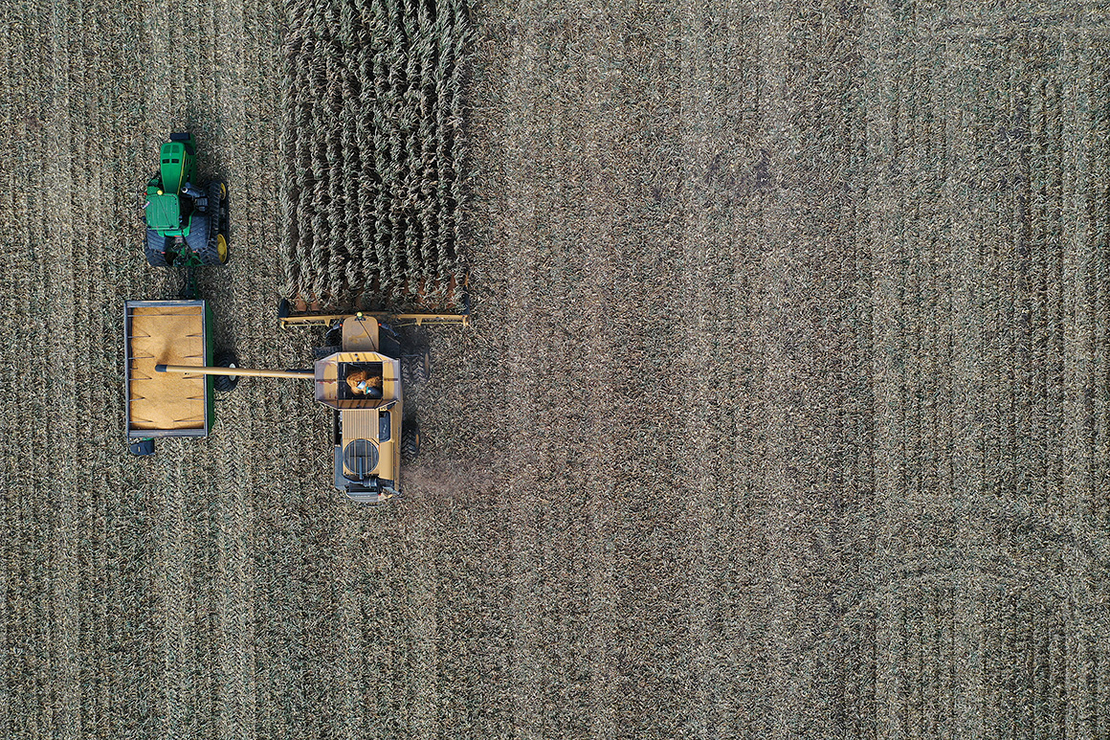 First in a two-part series. Click here for the second part.

A climate revolution is starting to take root in the agricultural industry.

And it’s all due to a growing interest in synthetic microbes.

Advocates say these custom-designed microbes — when applied to either seeds or fields — can help corn, wheat and rice draw more nitrogen from the air. That means farmers won’t have to use as much chemical fertilizer.

The climate potential is significant. If farmers start to broadly use these microbes, supporters say, it could cut the planet’s greenhouse gases by 3 percent. As a bonus, synthetic microbes can reduce farmland water pollution, too.

That’s a big deal for aquatic life. When nitrogen-based fertilizers wash into streams and rivers, they help create toxic “dead zones.” There is one the size of New Jersey that lingers in the Gulf of Mexico.

For now, these goals are largely aspirational.

But some heavy-hitters in the business and tech worlds have made some major moves in recent years to get the idea to this point.

The financial wheeling and dealing began in earnest in 2017. One of the world’s biggest farming companies — Bayer, a German company — bought Monsanto, a U.S. company, for $66 billion in August 2018. The deal was done partly to acquire Monsanto’s technology used to genetically alter crops.

It also built on another agreement Bayer had cut six months earlier. This was to partner with a startup company formed in Boston by biologists from the Massachusetts Institute of Technology called Ginkgo Bioworks.

Ginkgo executives sometimes describe the result as the “Microsoft of synthetic biology.” Its goal is to make synthetic microbes the way computer scientists design software. Notably, Bill Gates, the co-founder of Microsoft, was among the investors that helped finance Ginkgo.

Bayer orchestrated a $100 million joint venture with Ginkgo to create a new company called Joyn Bio. Werner Baumann, the CEO of Bayer, once referred to the new technology as “digital farming.”

Joyn Bio’s first goal is to engineer microbes that will help corn, wheat and rice get as much as half their nitrogen fertilizer from the air. That will not only cut water and air pollution but also reduce farmers’ fertilizer costs as they do their planting.

The financial and high technology plans are now in place for an agricultural revolution based on something smaller than can be seen by the human eye.

But the next step, according to Mike Mille, the CEO of Joyn Bio, will be more difficult: convincing farmers — who have been using and often overusing chemical fertilizers for over 100 years — to change their habits.

“They’re just fundamentally not sustainable,” Mille asserted in a recent interview, referring to current practices. While farmers using chemical fertilizers have been feeding the world for a century, he noted that the resulting climate-changing emissions and “huge runoff issues” now pose serious public health problems.

“So our whole approach is to essentially copy nature. Certain plants in nature, such as soybeans and legumes like peanuts, have evolved with microbes that actually fix nitrogen from the air and convert it into a usable nitrogen for the plant. And so they don’t need fertilizer,” he said.

Joyn Bio’s approach is to design and produce synthetic microbes that will perform the same function for corn, rice and wheat plants within three to four years. One type of designed microbe, he predicts, will initially supply enough nitrogen to cut a farmer’s need to apply chemical fertilizer by 50 percent.

The tiny microbes, he said, might be delivered as part of the coating on seeds or dumped on the fields mixed with the reduced requirement for conventional fertilizers.

A second microbe will be designed to capture carbon dioxide emissions from plants and keep them buried “in the soil for decades or longer periods of time.”

Both steps, Mille admitted, would require that Joyn Bio develop ways to measure and prove how much they cut emissions. This would allow farmers and people who own agricultural land to show the improvements they’ve made.

“There’s a government component to it,“ he explained, “which is how to incentivize growers and make it meaningful. Yes, growers can get paid and get incentives for truly capturing carbon and reducing nitrogen. That will help drive those investments and those behaviors.”

“I think all of these things have to happen for the change to occur, but they’re all doable at this point,” he concluded.

It helps that there are incentives for reducing water pollution, and that President Biden proposed the creation of a federal “carbon bank” during his campaign to help farmers and others reduce greenhouse gas emissions.

Dealing with climate change will require changes in many key industries around the world, Mille said. “But agriculture is as much in need of innovative solutions as anyone out there,” he said.

“These guys [farmers] are trying to make a profit, run a business and feed the world. These are huge challenges,” he said. “These changes are coming faster and in unexpected areas as the climate changes. So if you’re a scientist, it’s a great place to be. There is a lot that can be done and a lot needs to be done.”

‘We refer to it as a target-rich environment,” he added.

Ann Bartuska, a biologist and senior adviser to Resources for the Future, a Washington-based nonprofit, said she is “intrigued” by the potential of synthetic microbes. She described it as one of two “holy grail” ideas that have been the focus of agricultural research for the last 10 years as partial solutions to climate change.

The other idea, genetic manipulation, would turn crops like corn into perennials that don’t require replanting and heavy fertilization. But that approach is still in the laboratory stage.

Bartuska, a former deputy undersecretary of research at the Agriculture Department, worries that farmers will have to be shown how to use high-technology steps by impartial experts and learn how such techniques, carefully applied, can be measured.

Farmers’ current sources of new technology information, she added, are often bank consultants or fertilizer salesmen “who make money off of them.”

If the nation’s future path for agriculture is to reach net-zero emissions, said Peter Woodbury, a senior agricultural research scientist at Cornell University, that would be “quite an ambitious goal.” “It requires a kind of all-of-the-above kitchen sink approach,” he said.

Woodbury thinks more farmers might be lured into trying low-greenhouse gas solutions by “yield contests” at demonstration farms that show which process works best and the costs involved. In the case of synthetic microbes that cut fertilizer costs but produce the same yield, he added, it’s not rocket science. “That’s a win,” he said.

There are other scientists who are aiming at much more ambitious wins. Their technologies are, quite literally, higher.

For example, there is solar geoengineering: seeding clouds to brighten them or distributing harmless aerosols in the stratosphere. The goal is to artificially shade and cool the Earth and its crops by reflecting sunlight the way volcanic eruptions do as they circle the Earth.

A recent study published by scientists from Harvard University, the U.S. National Center for Atmospheric Research (NCAR) and research centers in Norway, China and South Korea used computer models to conclude that such techniques would have a “strong cooling effect” that would benefit many crops and also raise humidity levels.

“It’s vital to know what we can expect from agricultural yields as the climate changes,” said Danica Lombardozzi, a co-author from NCAR. “Solar geoengineering can’t restore our atmosphere to its natural state, but this study shows that it may be an important tool to help feed society if emissions of greenhouse gases continue.”

The paper suggests that more food risks will emerge if governments shun proposals to reduce global emissions while populations grow.

“Policymakers need to consider how emissions cuts might be supplemented by specific local adaptations to help farmers reduce the impacts of climate on agriculture and by global actions such as carbon removal and solar engineering,” said David Keith, a professor of public policy at Harvard University’s Kennedy School, another co-author.

Research on the paper was supported in part by Harvard’s Solar Geoengineering Research Program.