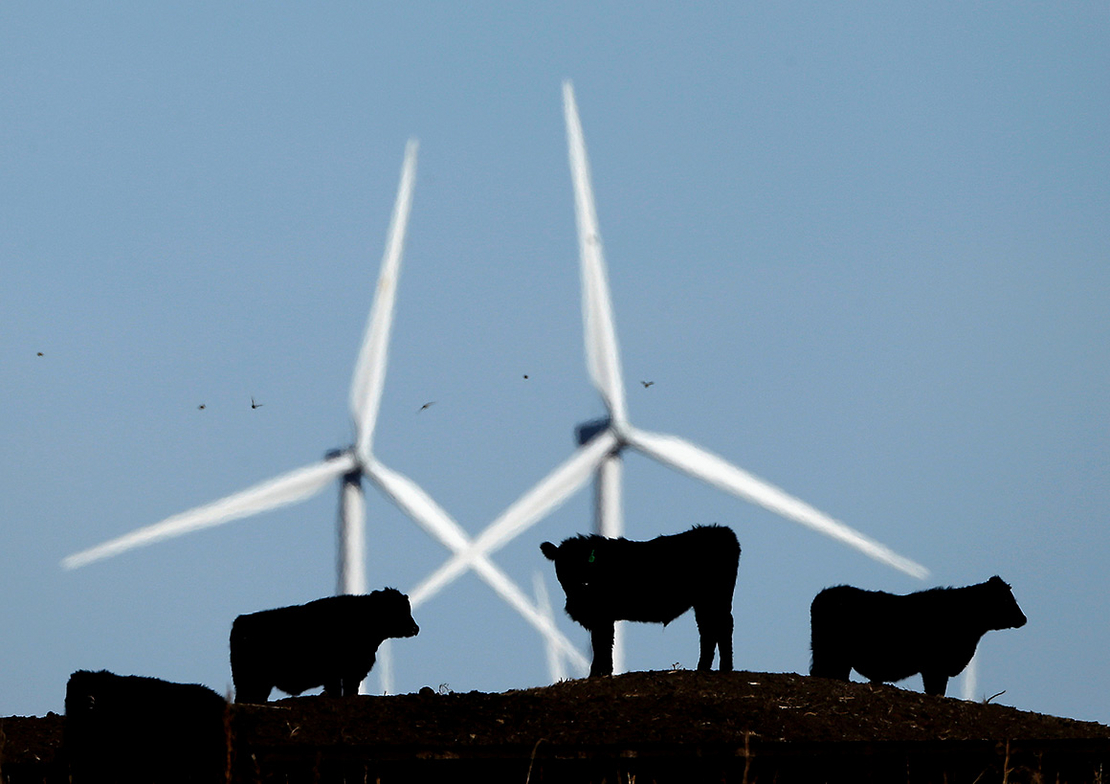 Cattle graze in a pasture against a backdrop of wind turbines, which are part of the 155-turbine Smoky Hill Wind Farm near Vesper, Kan. AP Photo/Charlie Riedel, File

A breakthrough initiative in the effort to bring agriculture into the fight against climate change arrived in 2019. It came not by tractor or truck, but through the launch of a new organization designed to give farmers a financial incentive to reduce their greenhouse gas emissions.

The group is called the Ecosystem Services Market Consortium (ESMC), and one of its main goals is to set up a system that rewards farmers and ranchers for adopting new technologies and methods that can cut emissions and help clean up polluted waterways.

There is “no precedent” for it, said Debbie Reed, the group’s executive director.

One early achievement was to convince some of the nation’s largest agricultural companies and food suppliers to get on board as potential contributors. It has grown to more than 70 participating members. They include Nestlé SA, Cargill Inc., General Mills Inc., Bunge Ltd., Archer-Daniels-Midland Co. and McDonald’s Corp.

In addition, trade associations such as the American Farm Bureau Federation, National Corn Growers Association and Fertilizer Institute are lining up alongside environmental groups, including the Nature Conservancy, World Wildlife Fund, and National Fish and Wildlife Foundation to join ESMC.

So far, contributors are focused on 10 pilot projects rewarding farmers raising livestock and crops. Most of them are in the Midwest. Reed’s group is developing a national system starting next year where farmers and outside auditors can learn and then measure the results of their carbon-saving practices. Then participating companies can buy the credits and use them to meet their future carbon emission reduction goals. ESMC plans to start a national system next year.

ESMC also is inviting state governments to help finance practices that result in a public good, such as reducing chemical fertilizer overuse that exacerbates water pollution.

“We want to provide an income stream for the early adopter and make them the peers from whom others can learn in their regions,” said Reed, who complains that the U.S. Department of Agriculture’s technical assistance program for farmers and ranchers “has been largely dismantled over the last couple of decades.”

Reed has watched agriculture policy being shaped in Washington from a variety of key positions: as an assistant to policymakers at USDA, as an aide to former Democratic Sen. Bob Kerrey from Nebraska, and as director of legislative affairs and agriculture policy at the White House Council on Environmental Quality during the Clinton administration.

She sees ESMC as a kind of necessary middleman. It is lining up to support the fight against climate change by preparing the rules for obtaining credits and developing measurable ways to show that new technologies and practices can grow more crops and reduce specific and super-potent farm and ranch-related emissions.

“We’re not the only game in town, but market mechanisms can provide a pretty dramatic signal,” Reed said.

One of the pilot projects is in Kansas. There General Mills is working with wheat growers, teaching them “regenerative farming.” This includes practices such as growing cover crops that remove CO2 from the air and store it in the soil. It also cuts back on practices that increase fertilizer use and soil erosion.

The Kansas Department of Health and Environment is helping by buying water quality credits to reward farmers whose actions remove pollutants. Leo Henning, a deputy secretary of the department, has said if the project is successful, it would be a “win-win-win for farmers, communities and the environment.”

Jamie Funke, a farmer in Patridge, Kan., told Kansas’ The Hutchinson News: “Before, you were trying to force nature to do what you want done with chemicals.” He added: “If we can prove we can grow better crops cheaper, that’s what’s going to change things.”

Jason Hildebrand, a farmer from Stafford County, said the practices helped him increase his cattle herd. He thinks one reason is that his soil quality has improved. Soil testing can be time consuming and expensive for farmers, but one of the benefits of ESMC’s projects is that it will do the testing.

“That will leave me time to do what I do best — farm,” Hildebrand told Kansas newspaper.

Kris Johnson, who is the Nature Conservancy’s interim director for its North American program, now wears two hats. He is also vice chair of ESMC’s board of directors.

He thinks ESMC’s multifaceted leadership and its focus on science-backed credits would gain more trust from farmers and ultimately provide them with more income.

“The trust issue is an interesting one,” Johnson said. “Only about 10 percent or so of farmers actually use USDA programs. I think a lot of it has to do with trust and mistrust in government.”

Johnson said USDA “has done a ton of good work as a result of the farm bill. But there’s only so much funding, and it’s been pretty static for the last 20 years or so.” He said the net result is that the department doesn’t have enough resources or people “to engage with farmers.”

He said he believes the ESMC approach would bring in additional resources including more financial support from food suppliers as well as food consumers who, he said, appear to be increasingly interested in sustainability issues.

Meanwhile, for its part, the Fertilizer Institute is working with farm groups in the Midwest on what it calls its 4R Nutrient Stewardship program. It emphasizes using fertilizer “from the right source, right rate, right time” and with the right placement that will increase both production and profitability “while enhancing environmental protection and improving sustainability.”

The alliance with ESMC’s science-based approach will help the Fertilizer Institute and its member companies track both farmers’ product use and water quality. In a statement last year, Corey Rosenbusch, the president and CEO of the institute, said it hopes the results will show a “significant correlation” between good stewardship and profitability.

By any measure, the results of stimulating greater contributions from agriculture to mitigate U.S. greenhouse gas emissions would appear to be huge. The industry contributed $1.1 trillion to the nation’s gross domestic product in 2019.

Congress in November 2019 — in the form of the House Select Committee on the Climate Crisis — asked Reed what federal policies would help ESMC’s wide-ranging group of interests speed up the fight against climate change.

In a series of written answers to the panel’s questions, Reed and other ESMC leaders suggested that continued research underway by the Department of Energy to develop better and more plentiful soil-based sensors to track changes in greenhouse gas levels would accelerate a more “cost-effective” approach to blunt climate change.

The group asserted that replenishing what it called a current “dearth of data” on the economic impacts of climate change on various agriculture production systems in “varied geographies” of the United States would result in giving better advice to farmers and ranchers.

ESMC noted that improvements on climate-related impacts on federal lands would remain a government problem. It suggested that if farmers and ranchers were given credits for proven innovations to reduce greenhouse gases on land they leased from the government, that would “protect and improve” federal lands.

Financial markets have seen investors eagerly plunge into stocks of companies that make synthetic microbes that can suck nitrogen oxides from the air and put it into use as fertilizer in the soil.

But Reed predicted in her recent interview that many farmers who frequently follow time-honored practices would still need better measurements and financial credits to help them change their ways.

“Otherwise it will be slow going.”